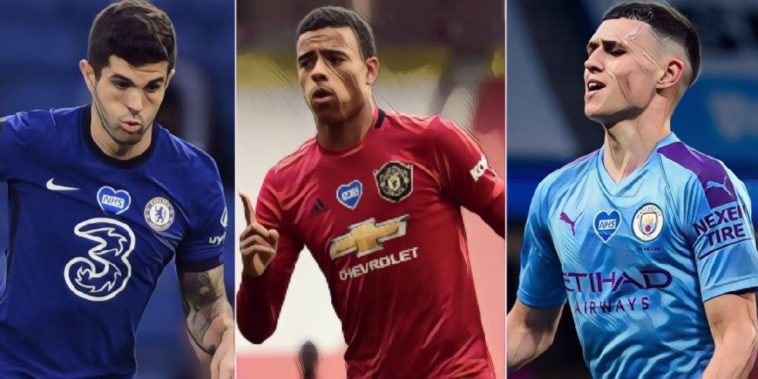 The first three weeks of the Premier League’s restart have flown by with the games coming thick and fast, the tensions beginning to increase ahead of a defining run-in at both ends of the table.

Several stars have returned to action in fine form despite the unprecedented suspension of the season, and we’ve decided to profile the players who have starred since the Premier League resumed last month.

Here are five players who have smashed it since the Premier League’s restart:

Chelsea‘s hopes of securing a top-four finish and Champions League qualification have been boosted by the returns of several players through injury, though perhaps none have made as big an impact as Christian Pulisic.

The USA international has enjoyed a promising debut season in English football, though his progress was halted after an abductor injury that ruled the winger out for eight league fixtures over the early months of the New Year.

The enforced break in the season has allowed Pulisic sufficient time to recover and he has returned in razor-sharp form for Frank Lampard’s side, scoring in victories over Aston Villa and Manchester City before starring during the 3-0 win over Watford last weekend.

Pulisic’s form has drawn comparisons to former fans’ favourite Eden Hazard and his pace and low centre of gravity add a different dimension to the Chelsea attack, with Lampard insisting the 21-year-old has the ability to match the likes of Mohamed Salah, Sadio Mane and Raheem Sterling for output from wide areas.

The fine form of Willian also deserves a mention, the 31-year-old’s recent showings providing Chelsea with a dilemma regarding the out-of-contract star.

Manchester United‘s impressive run of form could have seen us include a whole host of players in this feature, and whilst the likes of Bruno Fernandes and Anthony Martial have looked irresistible since the Premier League’s restart, we’ve opted for the inclusion of teenage sensation Mason Greenwood.

Ole Gunnar Solskjaer spoke of the enforced break in the season benefitting the physical development of the academy graduate, and his form since the season’s resumption has showcased his notable improvement.

That's 15 goals in all competitions.

Talent off the charts. pic.twitter.com/hdlfru8uT3

Greenwood has started each of the club’s past three league fixtures and scored in the victories over Brighton and Bournemouth, the 18-year-old becoming the first teenager since Wayne Rooney in 2004/05 to score 15 goals in all competitions for the club.

Solskjaer believes the teenager is already good enough to play for England following a stunning breakthrough campaign, Greenwood a phenomenal finisher with either foot and seemingly destined to star for both club and country in the coming years.

Greenwood’s season means he has already scored more goals for Manchester United than Alexis Sanchez, Radamel Falcao and Angel Di Maria combined, a huge positive for the Red Devils and vindication of a change in direction under Solskjaer.

Wolves remain in the hunt for a top four finish and Champions League football after making a largely positive restart to the Premier League season, registering three consecutive victories before defeat to Arsenal last weekend.

Nuno Espirito Santo’s side have played more than 50 games in all competitions so far this season, with their continued success a testament to a squad perhaps lacking the depth of their European rivals.

Wolves’ collective strength has seen the club continue to pick up both results and clean sheets, though the side remain reliant on the goalscoring talents of Mexican international Jimenez.

The 29-year-old continues to be linked with moves away from Molineux after a season that has delivered 24 goals and 10 assists in all competitions, Jimenez scoring in wins over Aston Villa and Bournemouth since the restart.

Jimenez’s goals have won 18 points for his side this season, the joint-highest tally in the Premier League alongside Liverpool’s Sadio Mane.

🤔 Is he one of the most underrated strikers at the moment? pic.twitter.com/m2dIiKaM6O

David Silva’s decade at Manchester City will come to an end at the conclusion of the current campaign, though the club will wave goodbye to arguably their greatest ever player safe in the knowledge the Spaniard’s heir is already amongst their ranks.

The talent of Phil Foden has been no secret as the midfielder has patiently awaited an opportunity for regular first-team football in a City side which has won back-to-back titles over the past two seasons, but now is surely the time to unleash the Stockport-born youngster.

Foden has starred since the Premier League’s restart with four goals in just four appearances, netting in victories over Arsenal, Burnley and Liverpool in addition to providing an assist.

The 20-year-old’s touch and technique is perfectly suited to a City side who excel with intricate passing play, Foden a natural fit alongside talents such as Raheem Sterling and the brilliant Kevin de Bruyne.

Guardiola has taken a patient approach with a player whose potential seems to have no limits, but Foden is now too good to spend any longer on the first-team fringes.

What a season it’s been for Danny Ings, the Southampton striker in contention for the Premier League’s Golden Boot after enjoying a career-best season for Ralph Hasenhuttl’s side.

Ings has taken his tally to 18 league goals for the season with three goals in four appearances since the restart, scoring in the opening victory against Norwich before hitting a brace against struggling Watford.

The 27-year-old not only provides the Saints’ side with goal threat, but his selfless style and willingness to hassle opposition defenders makes him a vital component of Hasenhuttl’s high-press system.

Ings produced arguably his best performance of the season during a goalless display in the win over Manchester City last weekend, setting the tempo for his side with a relentless work-rate as Southampton secured their third victory in four games since the restart.

Ings sits joint top for possession wins in the final third alongside Roberto Firmino and teammate Nathan Redmond, and former side Liverpool – believed to be searching for attacking depth  – may just be regretting their decision to allow the forward to leave Merseyside on a permanent basis last summer.

Read – The best Premier League stats of gameweek 33: The next generation has arrived