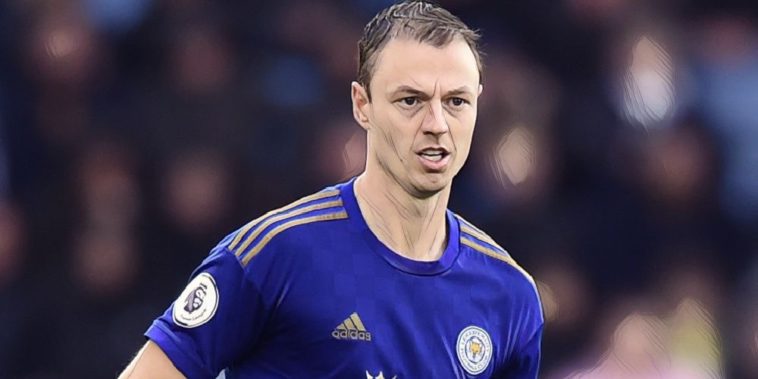 Manchester United have been linked with signing a new central defender this summer, though Peter Schmeichel reckons the club already had the ideal defender in their ranks, Leicester’s Jonny Evans.

The Northern Ireland international came through the youth academy at Manchester United to make his debut in 2007, going on to win three Premier League titles and make 198 appearances for the Old Trafford outfit, before Louis van Gaal deemed him surplus to requirements, shipping him off to West Bromwich Albion for around £4 million.

After three years at the Hawthorns and following Albion’s relegation, Evans would join Leicester City in 2018 where he has continued to enhance his reputation, the Foxes having spent the vast majority of this season in the top four.

Speaking on MUTV, Peter Schmeichel has backed suggestions that Manchester United could do with adding a new centre-back to their ranks, suggesting ‘born leader’ Evans would have been an ideal candidate if he had been kept on.

“We need to tighten up at the back, and I’ve got a name for you,” said the United legend. “I watch Leicester every game, and of course, my son plays there so I wouldn’t like this guy to leave, but I just don’t understand that we could sell Jonny Evans.

“He is just incredible. Plays every game now, I know he had injury problems when he was with us, but I don’t think he ever really got the time to get through them.

Jonny began his youth career at United in 2004, during his time spent at the club he won ten trophies including the Premier League Title, EFL Cup, FA CS and the FIFA Club World Cup pic.twitter.com/bXG8mVsa5D

“Plays every game, he’s an absolute born leader, he talks – you can hear this now – he talks and talks and talks, he directs everyone, he makes everyone around him better. And I could just see him in the centre of the defence at our place and it would improve it so much.

“Sir Alex always looked at Jonny Evans as the next captain, the next one that is going to lead the team, and that for me is probably the most important thing about him as a player.

“It is that quality, he is a born leader. And it’s interesting watching football these days because you can actually hear how any team, or how any player, communicates on the pitch. And for a lot of teams, it’s very, very quiet. It doesn’t have the same sort of noise on the pitch as my time, when everyone was talking and shouting all the time and giving directions.

“But you hear Jonny, you can hear him all the time, and I think if you can bring some of that quality into what we have at the moment, that’s going to improve it so much.

“I look at the goals we are conceding, I would say with just adding a little bit of quality, we could prevent literally every one of them. We’re not conceding difficult goals, there’s always some kind of mistake.”