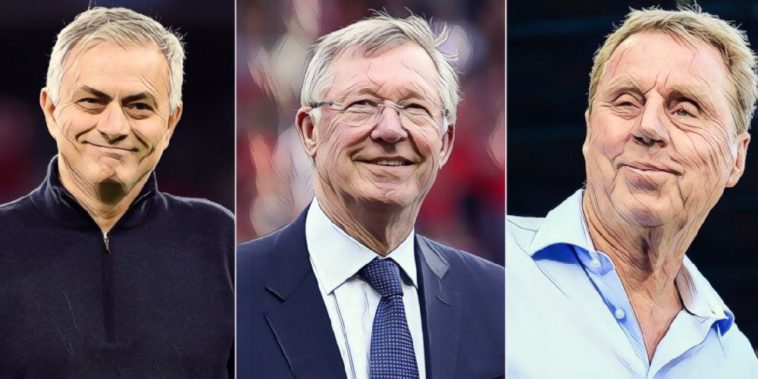 Tottenham’s 1-0 victory over Everton on Monday night secured a Premier League milestone for Jose Mourinho, the ‘Special One’ securing the 200th league victory of a hugely successful career in English football.

Mourinho’s achievement means he becomes just the fifth manager to reach a double century of Premier League victories, but how does he rank compared to the other men to have achieved the feat?

Here are our ratings of every manager to win 200 Premier League games:

Mourinho made an immediate impression on English football following his initial arrival at Chelsea, declaring himself as the ‘Special One’ before justifying that claim with a period of huge success.

The Portuguese guided the west London side to a first league title in half a century during his debut campaign, securing the Premier League with a record low of just 15 goals conceded before securing back-to-back crowns the following year.

After spells at Inter Milan and Real Madrid, he returned to Stamford Bridge and delivered a third league title during the 2014/15 season, becoming just the third manager to win three Premier League titles.

He later spent two-and-a-half years at Manchester United – guiding the club to a runners-up finish – before being appointed as Tottenham manager last November, with only Sir Alex Ferguson reaching 200 wins in fewer games than Mourinho’s 325 fixtures.

One of the greatest managers the game has ever seen. 4 countries. 25 trophies. ?? pic.twitter.com/eoD22M6zMM

David Moyes reputation may forever be tainted by his ill-fated appointment as Manchester United manager, but he proudly sits amongst the Premier League managers to have registered the most wins.

Moyes spent over a decade in charge of Everton and was responsible for the club’s finest moments of the Premier League era, guiding the Merseyside club to five top-six finishes and into the Champions League for the very first time.

The Scot’s short-lived reign as Sir Alex Ferguson’s successor lasted just ten months, and he later spent an unhappy spell in Spain with Real Sociedad before suffering a first career relegation during a single season with Sunderland.

Moyes is currently in charge of West Ham for the second time in his career, returning to revive the club’s fortunes following a disappointing season at the London Stadium, Moyes previously overlooked for the permanent position with the Hammers following a caretaker stint in 2018.

The ever-popular Cockney charmer will always be synonymous for his iconic car-window interviews and wheeler-dealer approach to the transfer market, but old ‘Arry certainly knew how to secure three points during his lengthy career in the Premier League.

Only two managers in the division’s entire history have ever managed more than Redknapp’s 236 wins, his career taking in spells at West Ham, Portsmouth, Southampton, Tottenham and Queens Park Rangers.

Redknapp guided West Ham to their highest-ever Premier League finish and took Spurs into the Champions League for the first time, securing three consecutive top-five finishes with the north London side during an impressive four-year spell at White Hart Lane.

He did however take 535 games to reach the 200 win milestone, the most of anyone on this list.

The longest reign of any manager in Premier League history and a man who did much to revolutionise English football during the mid-to-late nineties, Arsene Wenger arrived as a relative unknown at Arsenal before turning the north London side into one of the division’s most formidable sides.

Wenger’s emphasis on sports science was innovative upon the time of his arrival, whilst his knowledge of foreign markets – particularly his native France – saw him turn a host of unfamiliar names into global stars.

He won his first domestic double during the 1997/98 season before repeating the feat four years later, adding a third Premier League title in historic fashion with a famed unbeaten season during the 2003/04 campaign – his Gunners’ side immortalised as ‘The Invincibles’.

His latter years saw the club struggle to compete with emerging financial forces in the division but he continued to deliver Champions League football in addition to several cup triumphs, Wenger finishing in the top four in all but two of his 22 full seasons in charge.

See also – Moments that made the Premier League: Wenger stays silent as a football dynasty is founded

Manchester United have been the dominant force of the Premier League era and their success was built upon the managerial talents of Sir Alex Ferguson, the Scot the most successful manager in the history of English football.

After ending the club’s 26-year wait for a league title during the Premier League’s inaugural season, Fergie added a further dozen championships during a glittering career that saw United finish no lower than third before his retirement in 2013.

The iconic manager was able to oversee the successful transition from winning team to winning team, a master of extracting the best from his players and winning the mental mind games with opposition coaches.

United’s decline since his departure is perhaps the greatest indication of his unrivalled qualities, Ferguson amongst the finest managers in any league and any era.