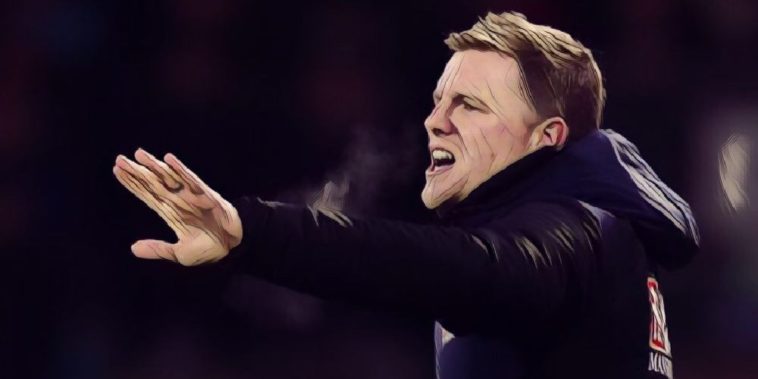 If you were playing the stock market but were investing in managers instead, Eddie Howe would have been a very shrewd investment a couple of years ago, now though his value seems to be at an all-time low and if he heads up a possible relegation with Bournemouth at the end of the month, that value could only depreciate further.

Of the current group of 20 Premier League managers, Howe is now the elder statesman of the pack and after taking the Cherries to the promised land, by virtue of winning the 2014/15 EFL Championship, the Dorset outfit have since been ever presents in the division.

Then again, one must not forget that Howe’s tenure at the now Vitality Stadium, started when Bournemouth’s humble fortress was better known as Dean Court and after coming back for a second stint in charge in 2012, his and the club’s ascendency through the divisions has been a remarkable tale.

With that said, it hasn’t necessarily been the fairytale that is sometimes portrayed by the media and when you consider that Bournemouth were among the biggest spenders in each of the three divisions that they gained promotion from, they aren’t quite the little engine that could. Instead, they are more, an outfit that has gained traction from a generous benefactor.

Since the arrival of now majority owner Maxim Denim in 2011, its no real coincidence that his injection of cash saw a rise up the divisions and although he sold a 25% share of the club back in 2015, it is the Russian that calls all the shots and bankrolls Eddie Howe’s expenditure.

Expenditure that you would have to say has been something of a bust and with repeated failures and expensive ones to boot, it does suggest that transfer guile is still something of a major weakness for the 42-year-old.

While his weakness may have left the Liverpool board more than happy, when you consider the almost eye-watering sums of money that were paid for the pair of Jordon Ibe and Dominic Solanke, there has been very little in the way of return on investment.

Add former Liverpool defender Brad Smith into the mix as well and collectively, a total of just under £40m has been spent on what were a trio of fringe players on Merseyside and a trio of what can largely be considered busts.

This collection of poor business dealing is the top end of the scale, but it doesn’t end there either and although wasteage has not come on a massive individual scale – not like more expensive high-profile flops at top-six clubs, it is the repeated failures that soon start to stack up quite a figure on the balance sheet marked ‘transfer blunder’.

Take the arrival of Benik Afobe for just shy of £12m, an outlay which saw him score 10 goals in 63 Premier League appearances before moving onto then second tier outfit Wolves or £8.5m on Lewis Grabban who had a second stint with Bournemouth between 2015 and 2016.

Unfortunately for Grabban, his return was nowhere near as good as his initial period on the seaside and with no Premier League goal in a total of 18 appearances, he is another player who has to be considered a Howe transfer bust.

Although the former Burnley manager has had a patchy transfer record at best, overall results have been better and if we are to use previous league finishes as the measuring stick, the 9th place finish in 2016/17 campaign was the obvious high point.

However, there is a sense that Howe and Bournemouth may have flown a little too close to the sun and with regression setting in for the two campaigns that followed, subsequent 12th and 14th place finishes highlight the backward steps that were being made.

Steps that have seemingly turned into giant leaps and even though they were spirited enough to earn a recent draw against Tottenham, a late bid for survival is not in their own hands and the usual chirpy demeanour of the Bournemouth boss, now cuts a rather frustrated figure.

Frustration for the fact that the ideas well has seemingly run dry, but perhaps also frustration because he has held on just that little too long and his decision to stay loyal, could be one that eventually backfires.

For a man who was at one time, touted as a future England manager, the dream of leading his country or even moving further up football’s hierarchy seems much further away and with managerial progression coming down to taking opportunities when they present themselves, those opportunities may dwindle after relegation.

Ultimately it is the great unknown, but had Bournemouth’s loyal steward moved onto a club such as Everton, when the likes of Ronald Koeman or Marco Silva had been ushered out the Goodison Park door, his own career trajectory could now have projected a much sharper positive curve.

Although, that very same graph seems to flatline at the bottom and if you were looking at your own managerial investment portfolio, it may be time for you to cut your losses and say that’s Howe for now.

Read Also – Teams that should have won the Champions League: Late 90’s Juventus