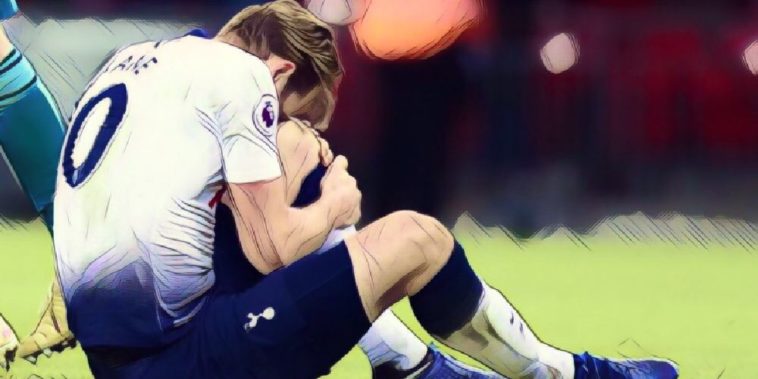 Harry Kane’s latest injury could force his respective managers for club and country to make some difficult decisions on the striker’s behalf.

On the face of it, Tottenham Hotspur’s campaign doesn’t look anything like a complete disaster: they’re still nominally in the race for the top four and have qualified for the knockout stages of the Champions League, where they will face RB Leipzig, not a gimme of a draw but eminently winnable nonetheless. If you had offered that to their fans a decade ago they would have snapped your hand off.

And yet, for many supporters the past six months have probably felt like a relentlessly grim slog. The terrible performances that have pockmarked the season, being eliminated from the League Cup by a fourth tier outfit, getting smashed by Bayern Munich and Brighton, the behind-the-scenes politics, the disgruntled players who clearly don’t want to be at the club anymore, and the sacking of a beloved manager.

Sympathy from elsewhere will be in short supply, but compared to the previous five years under Mauricio Pochettino, this has been far from a vintage season, one they will be happy to see the back of this summer. And that feeling has only been compounded by the most recent injury to star striker Harry Kane.

The England forward suffered a hamstring injury that will require surgery, with the early forecast for his return being in April. It’s a huge setback for both the player and the club, who have no like-for-like replacement, meaning they might be forced to spend money on a new one in the January transfer market.

This is just the latest in a series of serious setbacks for Kane in recent years. Last season he missed 91 days of action due to two separate ankle ligament injuries, both of which he returned from sooner than expected. It’s the eighth injury to befall him since 2016, which is having an accumulative effect on his overall performance.

Kane has continued to score plenty of goals, with 11 in the league for Spurs this season and 12 in 10 matches for England this calendar year. But as I wrote in October, there have been signs that he’s been regressing lately: he’s scoring fewer goals from open play, taking fewer shots in total, and his shot accuracy has also decreased.

At this point, it should be stressed that the 26-year-old is still a very good player capable of winning games with his terrific ability in front of goal, but his time as an elite striker appears to be coming to an end. The sad thing is, when you consider his relatively young age, this was completely avoidable.

Kane has continually been rushed back from injury, which has lead to further injury down the line. It happened last season when he returned to action just 40 days after suffering a torn ankle ligament in January, which resulted in another ligament injury in April. This put his spot in the Champions League final in severe danger, but again he rushed himself back and didn’t look at all at the races that night against Liverpool.

With a European Championship on the horizon, do we expect any different this time around? History will no doubt repeat itself: Kane will fast-track his recovery, play in a summer tournament, and, in all likelihood, be the worst for it. Jose Mourinho undoubtedly wants him back as soon as possible, increasing the pressure on him to come back, especially after his team failed to break down Liverpool on Saturday.

No one wants to deny a player of his pedigree the opportunity to represent his country at a Euros, especially when England have a genuine chance of competing at the business end. But Gareth Southgate needs to learn the lessons of injured English stars from the past – Michael Owen, David Beckham and Wayne Rooney all made themselves available for the national team soon after suffering serious injuries, and none of them were ever the same again.

It would not be a popular choice to leave Kane at home, particularly when a Wembley final is at stake, but it’s not as if Southgate is stuck for attacking options right now: Marcus Rashford is having his best season thus far, Tammy Abraham has made the leap, while Danny Ings has finally rekindled his very best form at Southampton.

If we want to see the best of Kane for years to come, then he needs to take the time off. Sacrifice Euro 2020 so he can make it to the 2022 World Cup. We’ve seen what happens when forwards reach the cliff and fall over the other side – the likes of Fernando Torres, Robin van Persie and Alexis Sanchez were elite one day and zeros the next. The decline can be unforgivingly steep.

Kane needs to seriously consider not playing another game for club or country between now and the start of the next campaign, otherwise, the cliff will come for him sooner rather than later.

Read: Five of the best young newcomers to the Premier League this season

See Also: Five players with the most Premier League wins ever