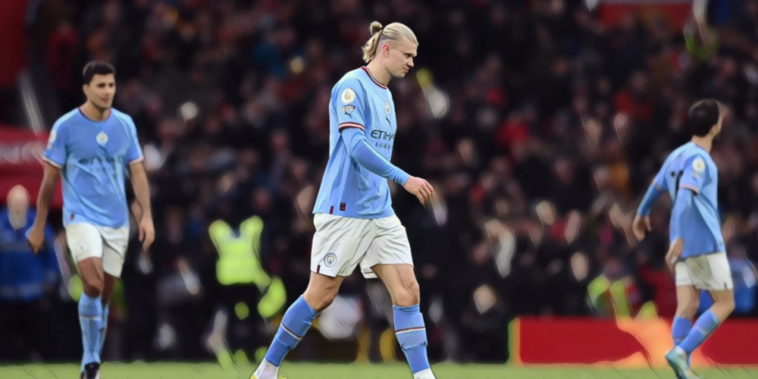 Pep Guardiola insists Manchester City’s struggles are his fault and not a result of Erling Haaland’s presence in the side.

City have stuttered in recent fixtures and have lost each of their last two games in all competitions, bowing out of the EFL Cup at Southampton before a Manchester Derby defeat at Old Trafford last weekend.

Haaland has scored a staggering 27 goals in 24 games this season, but has failed to find the net in each of his past three appearances.

The Norwegian cut a frustrated figure during the defeat at Manchester United and some have suggested that City are a more cohesive unit without the 22-year-old in the side, having often operated without a recognised centre-forward in recent campaigns.

Guardiola has dismissed that notion and insists City’s recent blip is his fault. Speaking ahead of Thursday’s clash with Tottenham, the Spaniard said it is important that his side provide better service to Haaland.

“We have played really well with him [Haaland], so it is not about that,” Guardiola said at his pre-match press conference. “To play better, we have to create more chances, provide more balls for him or the other strikers.

“How we played in the last two games didn’t help Erling to score. We seem like we have too many players outside and too few players inside. Without players inside you cannot defend or play well. This is mainly the problem. If Erling is alone we are not going to score goals.”

Guardiola insisted the mentality of his squad was not an issue despite back-to-back defeats and shouldered responsibility for the club’s recent results.

City face a Spurs side who have had the better of recent meetings between the sides this evening, with the north Londoners having won four of the past five Premier League encounters.

“The mentality of these players is not a problem,” Guardiola said. “When the players don’t play well, it’s because there is something wrong in my decisions. Sometimes I didn’t choose the players properly or the way we played.

“I have to find a solution. That is a challenge I like because it makes me feel I have to find something to help the team get better.”