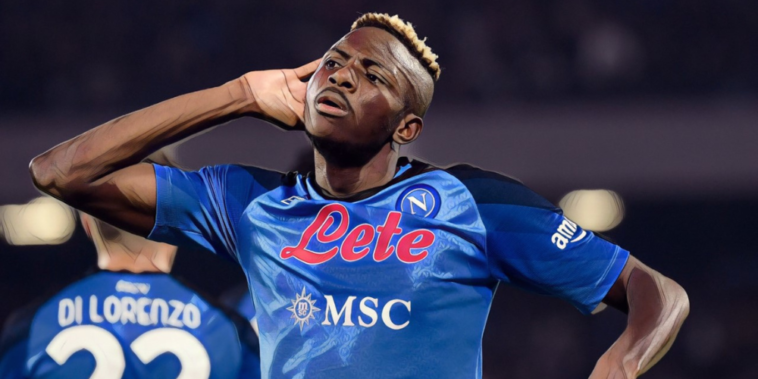 Europe’s top leagues have reached the halfway point in the season and the race for the European Golden Shoe is beginning to heat up.

Some familiar faces lead the goalscoring charts across Europe and we’ve decided to look at those leading the race for the divisional Golden Boots in the Premier League, the Bundesliga, La Liga, Serie A and Ligue 1.

Here are the top scorers from each of Europe’s top five leagues.

Robert Lewandowski’s summer exit from Bayern Munich has opened up the race to win the Kicker-Torjägerkanone as Germany’s leading scorer.

Lewandowski won the award in each of the last five seasons and seven times in the past nine campaigns, but a switch to Spain has left the race wide open to replace him at the top of the charts.

Christopher Nkunku is the current top scorer in German football, having netted 12 league goals for RB Leipzig. The Frenchman enjoyed a breakthrough campaign last term to win the Footballer of the Year and Bundesliga Player of the Season accolades, following a season in which his output exploded.

The 25-year-old scored 20 goals and provided 13 assists last season and has maintained that goalscoring form this time around. He leads Marcus Thuram (10) and Niclas Füllkrug (10) at the top of the Bundesliga’s goal charts.

Nkunku’s 12 goals have come in just 14 starts for Leipzig, who are third in the table and six points behind leaders Bayern. Remarkably the forward – who has agreed a deal to join Chelsea this summer – has not provided a single assist.

Napoli are the runaway leaders in Serie A with Luciano Spalletti’s team having emerged as one of the most impressive outfits in European football.

Khvicha Kvaratskhelia and Kim-Min Jae have been in fine form since their summer arrivals in Naples, but it is the prolific form of Victor Osimhen which has spearheaded their charge. The Nigeria international was named as Serie A’s Best Young Player in 2021/22 and has enjoyed a superb campaign once again, scoring 12 goals in just 13 starts for the league leaders.

One of the world’s very best. 🇳🇬 pic.twitter.com/ZaZFMZhORR

Osimhen’s goals have helped Napoli build a nine-point advantage over champions AC Milan as the club chase its first Scudetto since 1990. He has scored four goals in four games since the season’s restart, including a brace as Napoli thrashed Juventus 5-1 last weekend.

Juventus had recorded eight league wins in a row without conceding before the clash, but were dismantled as Osimhen and Kvaratskhelia tore the Turin side apart at the Stadio Diego Armando Maradona.

Napoli are on course to win their first title since Maradona’s peak at the club and will be a team to fear in the Champions League’s knockout rounds. Spalletti’s side face Eintracht Frankfurt in the last 16.

Lewandowski left Bayern Munich last summer in search of a new challenge, following a decorated career with the club that saw him score 344 goals in 375 games and finish as the Bundesliga’s leading scorer on a joint-record seven occasions.

The 34-year-old has wasted no time in announcing his arrival at Barcelona with a prolific start to the season having lifted the Catalan club to the top of the La Liga table. The Poland international has 20 goals in 21 starts across all competitions, including 13 in 14 in the league.

Robert Lewandowski is putting together a remarkable debut season 🔝 pic.twitter.com/44gdWz88iy

He claimed his first silverware with the Spanish side this week, as Barcelona thrashed Real Madrid to win the Spanish Super Cup. Lewandowski scored the second in his side’s 3-1 win and will have his sights set on further trophies this season.

Barcelona lead the title race by three points from Real Madrid and face Manchester United in a mouth-watering Europa League tie next month.

Kylian Mbappe has dominated the goalscoring charts in French football in recent seasons and the Paris Saint-Germain superstar is putting together another memorable campaign.

Last season Mbappe ended the campaign as the player with the most goal involvements across Europe (42), as he claimed a fourth consecutive top scorer award in Ligue 1. He leads the race once again with 13 goals in 17 appearances this season, while the 24-year-old is also the joint-leading scorer in the Champions League on seven goals.

After winning the World Cup’s Golden Boot and becoming just the second player to score a final hat-trick in Qatar, Mbappe will next have his sights set on PSG’s all-time goal record. He’s just nine short of matching Edinson Cavani’s record of 200 and is expected to pass the Uruguayan before the season’s end.

Arguably the finest forward in the game right now, the three-time Ligue 1 Player of the Year will be key to PSG’s chances of success both at home and in Europe this season. Mbappe faces strong competition for Ligue 1’s leading scorer award this season however, with just three goals separating eight players at the top of the rankings.

Lille’s Jonathan David (12) and Lorient’s Terem Moffi (12) are Mbappe’s nearest challengers, with both Neymar and Alexandre Lacazette one goal further behind.

Erling Haaland has stormed away in the race for the European Golden Shoe, following a stunning start to his career at Manchester City.

Question marks over whether the Norwegian would need a settling in period were rapidly removed, as Haaland plundered in the goals during a record-breaking start in English football.

He became the fastest player to reach 20 goals in the division after reaching the landmark in just 14 games, while he needed just nine Premier League games to score three hat-tricks – becoming the first player to claim the match ball in three consecutive home games.

He is six goals clear of nearest challenger Harry Kane in the race for the Premier League’s Golden Boot and will have his sights set on the division’s single season goal record. Mohamed Salah (32) holds the record for a 38-game season and Haaland still has 20 games to pass the Egyptian’s benchmark.

The 22-year-old could become just the fifth man to win the European Golden Shoe as a Premier League player and the first to do so since Luis Suarez in 2013/14.