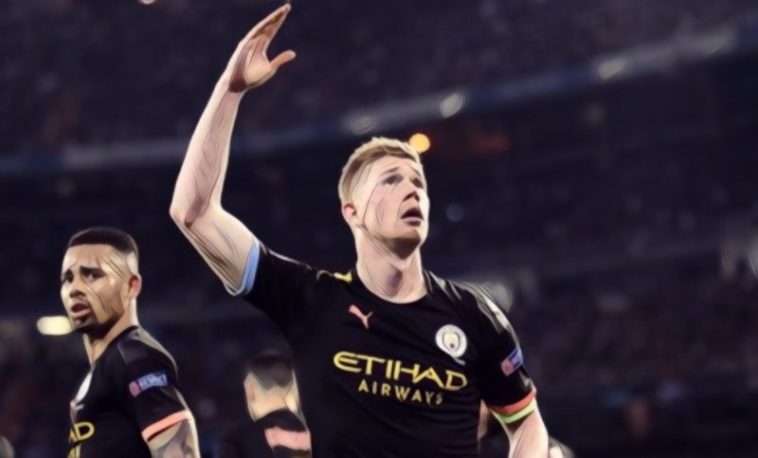 Manchester City finally made some positive headlines when it comes to the UEFA Champions League as Pep Guardiola’s side secured an impressive 2-1 win away to Real Madrid in the first-leg of their last 16 tie at the Bernabeu on Wednesday night.

Despite suggesting Raheem Sterling had fully recovered from injury Guardiola left the 25-year-old attacker on the bench, while the Spaniard also lived up to his reputation for throwing tactical curveballs in big games, leaving out top scorer Sergio Aguero and playing influential midfielder Kevin De Bruyne as a false nine.

The opening exchanges turned out to be a fascinating battle between Real and City, with some of the passing and high octane pressing a joy to watch.

Gabriel Jesus, starting on the left of City’s attack, forced Los Blancos goalkeeper Thibaut Courtois into a decent stop from eight yards midway through the first half. Real went close themselves through Karim Benzema, although Ederson got down quickly to save the French forward’s close-range header and the teams would go in at the break all square.

Man City looked much the better side at the start of the second period, with Riyad Mahrez seeing two efforts denied by Courtois, while the Algerian fired another attempt just wide.

However, the 13-time European champions took the lead against the run of play on the hour mark after a trio of mistakes from Nicolas Otamendi, Rodri, and Kyle Walker allowed the impressive Vinicius Junior to race clear and square for Isco to finish smartly.

City refused to let their heads drop though and deservedly equalised in the 78th minute through a fine De Bruyne cross headed home from the edge of the six-yard box by Jesus, the Brazilian international having moved into a central position after the introduction of Sterling.

England international Sterling return from injury subsequently paid more dividends five minutes later when the attacker was taken down in the area by Dani Carvajal, allowing skipper De Bruyne to slot a penalty past international teammate Courtois to give the Citizens the lead.

Things went from bad to worse for Real when captain Sergio Ramos picked up the 26th red card of his career for a professional foul on Jesus. City played out the remaining five minutes of the game in relative comfort, if anything looking like the side more likely to score another goal.

Manchester City become just the third English side to beat Real Madrid in their own back yard 👏 pic.twitter.com/JN813tQloZ

Speaking afterwards City boss Guardiola was pleased to see his side get such a crucial win, although he was quick to point out that there is still plenty of work to do in the second leg at the Etihad on the 17th of March.

“We tried to come here to win the game and we did,” Guardiola told BT Sport.

”This is just the first part. If one team can overcome this situation, it’s this club.

“When we were better, we conceded a goal. When they were better, we scored a goal. That’s football. I remember the quarter-final a few seasons ago at Anfield when we played incredibly well and they scored all their shots on target.”

One black spot on what was a fine night’s work for City was seeing influential centre-back Aymeric Laporte forced off in the first-half with injury, although Guardiola would not confirm the severity of the Frenchman’s injury and praised Fernandinho who performed admirably after coming off the bench.

“After five months injured in this scenario it’s so demanding,” Guardiola continued.

”Fernandinho came in and did incredibly well. I’m so proud. This is the first step. It’s not over. We can enjoy the moment.

”On Sunday we have a final. We’ll keep going in the Premier League and prepare for the second game against Real Madrid.”

Next up for City is the Carabao Cup final clash with Aston Villa at Wembley on Sunday.