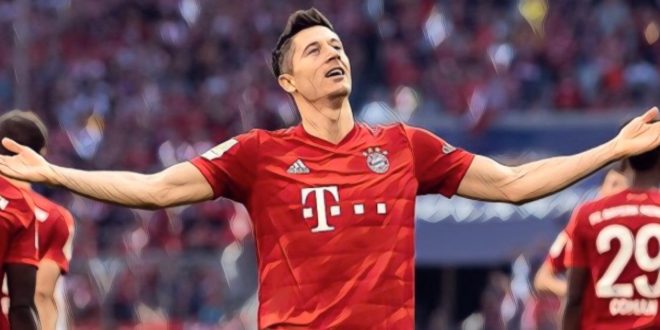 Harry Diamond 26/02/2020 Five of the Best, Opinion/Features Leave a comment

Bayern Munich’s Robert Lewandowski once again demonstrated his elite abilities in the Champions League this week, starring as the Bundesliga champions dismantled Chelsea in the first leg of their last-16 tie.

In a world of modern football where positions are often difficult to define, the Polish international is amongst the finest on the planet to be recognised as a traditional number nine.

Following Lewandowski’s latest display, we’ve decided to look at some of the finest forwards in the game at present, though injured stars such as Harry Kane and Luis Suarez have not been included.

Where else to start but the Bayern goal machine?

Lewandowski has been regarded amongst the very best footballers in world football for some time, but at 31-years-old seems to have elevated his game to even loftier standards this season.

Having scored 40+ goals in all competitions in each of the past four seasons, Lewandowski has hit 39 in just 33 appearances so far this term, including being the leading scorer in the Champions League with 11 goals in only six appearances.

Bayern teammate David Alaba believes the forward belongs in the same company as Lionel Messi and Cristiano Ronaldo when it comes to discussing the world’s best player, and it is difficult to disagree based on Lewandowski’s exploits this season.

The four-time Bundesliga top scorer is now the third highest goalscorer in the history of Germany’s top flight, with only Gerd Muller and Klaus Fischer currently ahead of his tally – quite some company to keep.

Manchester City’s all-time record goalscorer continues to score at a prolific rate, recently becoming the highest scoring foreign player in the history of the Premier League and rising to fourth in the overall rankings.

The Argentine is firmly in contention to secure the division’s Golden Boot and has 21 for the season in all competitions thus far, whilst he eclipsed Alan Shearer for the most ever Premier League hat-tricks with a treble against Aston Villa earlier in the campaign.

Few players are as efficient in front of goal as the diminutive Aguero, his explosive acceleration and ice-cold composure marking him out as one of the most dangerous goalscorers in European football.

No player in Premier League history to have scored over 100 goals can better his goals-per-game or minute-per-goal ratios, and the 31-year-old will have his eyes on firing City to Champions League glory this season to add further to a legacy at the Etihad that has delivered 252 goals in just 365 appearances.

Immobile’s career may have had its highs and lows, but the Italian international is enjoying his best ever period with a stunning season so far for Lazio.

The two-time winner of the Capocannoniere award as Italian football’s leading scorer is on course to make it a hat-trick of successes, having fired 27 goals in just 25 Serie A appearances so far this season, whilst providing a further six assists to fire the capital club’s title charge.

Immobile’s start to the season is the most prolific in Serie A in 61 years, whilst he is quickly closing in on Gonzalo Higuain’s all-time record of 36 goals in a single top flight season, set during the Argentine’s time at Napoli four years ago.

The 30-year-old will hope to continue his blistering start as he seeks to secure his place in the Italy side ahead of this summer’s European Championships, whilst he is also the current leader in the race to secure the European Golden Shoe.

Having scored prolifically since making the switch to RB Leipzig four years ago, Timo Werner is now enjoying the best season of his career with the Bundesliga side and continues to be linked with some of European football’s biggest clubs.

The Germany international is averaging almost a goal-per-game with Leipzig this season, sitting just behind Lewandowski in the race to finish as the Bundesliga’s top scorer with 21 goals thus far and adding a further four in the Champions League as Julian Nagelsmann’s side feature in the knock-out stages for the first time.

Liverpool have been linked strongly in recent months, and the prospect of adding Werner’s electric pace and eye for goal to a forward line already containing the likes of Sadio Mane, Mohamed Salah and Roberto Firmino is a truly tantalising prospect.

The third Bundesliga star to feature on this list and a player that has captured the imaginations of football fans worldwide so far this season, Erling Haaland is amongst the most exciting young talents in the game.

Bursting onto the scene with a phenomenal goalscoring record at Red Bull Salzburg, Haaland scored a hat-trick on his first appearance in the Champions League before becoming the first teenager to score in his first five consecutive appearances in the competition.

After firing a barely believable 28 goals over the first half of the season for Salzburg, Dortmund would win the race to secure his signature during the January transfer window and he made the step-up to German football in stunning style.

Haaland has scored 12 goals in just five starts since making the switch to Dortmund, including netting both goals during the club’s 2-1 Champions League last-16 first leg victory over Paris Saint-Germain.

The Norwegian continues to obliterate goalscoring records and is arguably one of the most dangerous forwards in world football, despite not turning 20 until the summer.