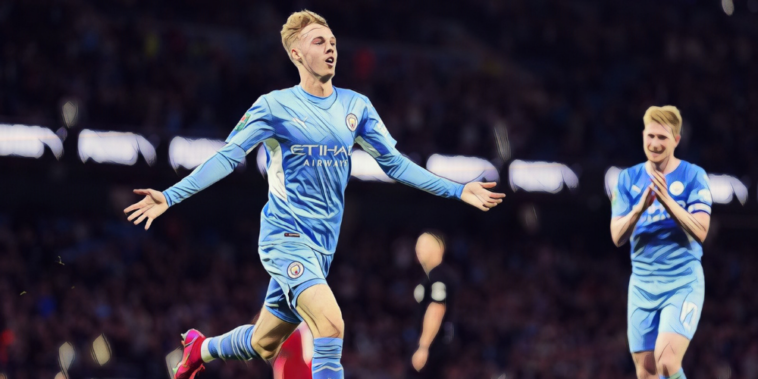 Pep Guardiola believes B teams would be ‘best for English football’ and has hailed Manchester City’s academy system.

Guardiola turned to a collection of the club’s academy players as City began their defence of the Carabao Cup with a 6-1 win over Wycombe, naming five teenager debutants in the starting side, whilst a sixth – James McAtee – came off the bench to make his first appearance.

Joshua Wilson-Esbrand particularly impressed at left-back, whilst another academy graduate, Cole Palmer, sealed the win with a stunning first goal in City colours.

Guardiola spoke on his delight with the performances from his youthful side and says City possess a ‘really good generation of players’ emerging from the ranks at the Etihad.

“We have talented players. We can count on them absolutely,” he said, as per Man City’s official website. “They train with us every single day. They don’t make bad faces; they don’t make you feel uncomfortable in your decisions.

“They just have the desire to be something in world football. With their skills and desire – they got it at this club. I am so proud to be manager of this club.

“Today we saw a little bit of what they can do. We know exactly how good they are. As a manager I can enjoy it. I can use them. Without the incredible effort of many people in the Academy it would not be possible.

“Maybe they were nervous, I don’t know, They were supported by Phil Kevin, Raz and supported by our people. Thanks very much for coming tonight.

“I know how special it is for our fans to see Academy players. They train with us every day.

“We know they can do it. It is a dream for them to play in this kind of game in this stadium. We told them to do what they do. They will be supported.

“We have a really good generation of players. This is one of the nights I like to be manager.

“Normally the best way to introduce these guys to a high level is one or two surrounded by the professional players but the circumstances is what it is.”

Guardiola discussed his depleted first-team options at present, with his rotated side coming ahead of a pivotal week in which City face Chelsea, Paris Saint-Germain and Liverpool in succession away from home.

“Today we had no central defender, just Ruben [Dias]. Nathan [Ake] was at his father’s funeral. Aymeric [Laporte] and John [Stones] are better but still not able,” he said.

“Oleks[ander Zincheko] is injured and Kyle [Walker] and Ferna[ndinho] were not ready to play today. Joao should rest because of all his minutes. When that happens, that’s why you have the Academy. Why would you not use it?

“McAtee didn’t play and Edozie because it was good for Kevin, Phil and Raz to get the rhythm otherwise they would have played. I know them.

“They make a training session and listen. They know what to do. Enzo Maresca did an incredible job last season and made them better players.

“They faced one of the legends of English football (Adebayo Akinfenwa). It was a pleasure to meet him. It is not easy to do. All three, with Romeo, they did really well.

Highlights from our @Carabao_Cup tie with Wycombe! 👇

“They made mistakes, but that is part of the job. We will show them and they are going to improve. Josh played so well.

The City boss also spoke on the development of footballers in this country and suggested that the introduction of B teams in England’s lower tiers – a concept used in Spain – would benefit the emerging talent within the country, something that he has spoken about before over the years.

“I was lucky to grow up in Barcelona. Won the Champions League with seven players from the Barca academy. That is unique. These young players feel grateful, their families are grateful for how many hours the club invested in them.

“They have something special. Cole Palmer is an exceptional player.

“They have this rhythm because they can train with us. It would be better if they could play Wycombe every weekend. That would be the best development for these players.

“They should play every day against teams like championship or league one. That would be the best for English football, not playing against 17-19 year olds and winning 5-0 every single day.

“That’s not good for them, but I am not here to change anything in this country.”