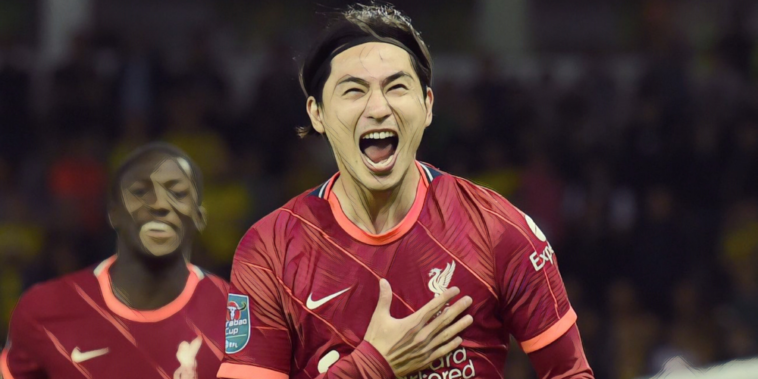 Liverpool chose to rotate their options for the trip to Carrow Road with Minamino making his first appearance of the season, with the Japan international scoring twice in an encouraging performance against the Canaries.

The 26-year-old has struggled for regular opportunities since arriving on Merseyside from Red Bull Salzburg in January 2020 and spent the second half of last season on loan at Southampton.

Klopp discussed the performance of the Minamino and praised the forward as a ‘top character’, believing the star will take confidence from his two-goal haul at Norwich.

“It is just a logical thing. He is in a really good moment,” he told his post-match press conference.

“I know he didn’t play too much, but in the wrong moment he was injured, coming back and stuff like this. It is sometimes not so easy, but he is a top character and he enjoyed the game tonight. That was important for him and important for us, so that will help him and will help us.”

Klopp was asked if Minamino had been frustrated with his lack of opportunity so far this season, but says that an injury sustained on international duty halted the player’s progress following an impressive pre-season campaign.

“I am not sure if it was frustrating. A footballer wants to play, that’s clear, and it didn’t happen too often,” he said. “He was with the national team and he got injured there, came back and was not fit immediately and became fit since he is back. It is now not that he did not play for 16 weeks or whatever, it was the time after the injury.

“Other players need time as well to get back on track after an injury, but Taki is in a good moment, trained really well and deserved these two goals. The first one, really good awareness, quick in mind, finished the situation off. The second one I didn’t really see 100 per cent but the acceleration in the box in the short, small space was really good.

“He was really good in pre-season, then he started, then he got injured and now the rest of the season starts. Nobody needs to worry, Taki will be fine.”

Minamino showcased his versatility during the second half after moving into a midfield position, with Klopp revealing the move was designed to get the forward more involved in the Reds’ build-up play.

“We wanted him as a footballer in midfield because Taki looked really strong today,” Klopp said on the positional switch. “We didn’t use these half-spaces enough so we put him there. We wanted Oxlade then with a little bit more freedom on the left wing. That was the reason, just so that he can connect the game. Taki is a smart player and he can play different positions, that was the reason.”