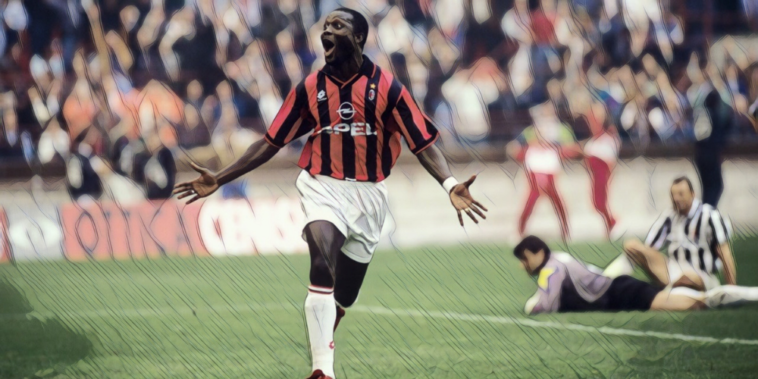 Africa has produced its fair share of sporting superstars in the modern era, with a collection of footballers who have reached the pinnacle of the sport after crossing to Europe.

Whilst the likes of Samuel Eto’o, Yaya Toure and Mohamed Salah have all collected winners’ medals in Europe’s major leagues and the Champions League, just one of Africa’s exports has ever won football’s greatest individual accolade, the Ballon d’Or.

George Weah’s coronation as world football finest remains a unique piece of history for the current president of Liberia, who at his best was west African’s wonder and one of the most devastating forwards in the game.

Weah – both during and post his playing career – became a symbol of hope for Liberia, having risen from one of the nation’s most impoverished backgrounds to the summit of the global game.

Raised as one of thirteen children, he dropped out of education in his final year before focusing on football, enjoying success with a number of Liberian sides and twice winning the nation’s Premier League before his talents were unearthed.

Arsene Wenger was the man to bring Weah to Europe, on the advice of then Cameroon manager Claude Le Roy, who had been wowed by Weah during short stints in the Ivory Coast and Cameroon.

It took a figure of just £12,000 for Wenger – then manager of Monaco – to bring Weah to the principality, a pittance when weighed against the impact the forward would have in French football.

Weah evolved into one of the most exciting talents in world football across four seasons at Monaco, scoring 65 goals in 136 appearances and winning the African Footballer of the Year award in 1989.

Far from the traditional penalty-box poacher often associated with forwards of his age, the Liberian was a complete forward package, drifting deep and wide to tear apart opposition backlines.

He won the Coupe de France and reached the final of the Cup Winners’ Cup with Monaco, but it was after a move to Paris Saint-Germain where Weah truly showcased he belonged amongst the best.

At times in Paris, Weah was untouchable.

The feints, the shimmies, the balletic feet combined with searing pace – Weah was a force of nature when rampaging towards goal with the ball at his feet.

The goals continued to flow freely with Weah netting 23 in all competitions during his maiden season with PSG, winning the Coupe de France once again during that first season, before the Ligue 1 title arrived the following campaign.

It was in Europe, however, where Weah made his lasting impression, scoring 16 goals in just 25 games in continental competition for PSG, including finishing as the Champions League’s leading scorer in 1994/95.

Weah’s goal propelled PSG through the tournament and to the semi-finals, winning six from six in the group stages with the forward enjoying his own Goal of the Season competition on club football’s biggest stage.

He netted a stunning solo effort against Spartak Moscow at the Parc des Princes, embarrassing two Russian defenders simultaneously with a fleet of foot before keeping his cool to roll the ball home.

It’s the 26th anniversary of two George Weah Seeya Laters sending Spartak’s defence out for a pie and a pint at the Parc Des Princes.

Spartak were the victims of a Weah wondergoal once again in the reverse fixture, though this was a strike more crash than craft.

David Ginola’s lay-off rolled invitingly for the forward, who opts for power with an outrageous toe-poked effort from distance that arrows into the top corner.

Weah was enjoying himself under the bright lights of Champions League evenings, but the best was still yet to come.

PSG travelled to face a Bayern Munich side containing no shortage of marquee names, with a fairly uneventful game heading towards a draw at the Olympiastadion before Weah produced one of the Champions League’s greatest goals.

Receiving possession mid-way inside the Bayern half, he plays an initial one-two before embarking on an individual run of brilliance that remains one of the defining George Weah goals.

The Liberian’s speed, skill and immaculate balance allows him to chop and change direction through the Bayern bodies, leaving a trail of desperate challenges in his wake before slamming an emphatic finish beyond Oliver Kahn.

PSG’s run was ended in the semi-finals against AC Milan, the side that would come calling at the season’s end for the Parisian’s prized possession.

Serie A in the nineties was the destination of choice for world football’s finest, a collection of talent unlikely to ever again be replicated in one domestic division.

Weah’s arrival proved the perfect tonic for an AC Milan side that had been deprived of the services of Marco van Basten, the forward having retired prematurely after a lengthy battle to recover from ankle issues.

The move to Milan saw the forward form a frontline alongside Roberto Baggio and Dejan Savićević, finishing as the Rossoneri’s leading scorer as the Scudetto arrived at the San Siro during his debut season.

His performances for both PSG and Milan contributed to his coronation as winner of both the FIFA World Player of the Year award and the Ballon d’Or in 1995, the latter a fitting triumph in the year that non-European footballers first became eligible for the game’s greatest individual honour.

Even given the progress African football has made in more than two decades since, no native of the continent has yet replicated Weah’s incredible achievement.

Weah was arguably the prototype for the modern forward, a player who refused to conform to conventions and stay within the widths of the post.

In an era when forwards largely took residence inside the confines of the box and awaited service, Weah was both the converter and the creator.

No goal typifies his ability to make things happen singlehandedly better than his fabled coast-to-coast goal against Verona.

Receiving the ball inside Milan’s own box as the Rossoneri defend a corner, Weah takes off with the ball at his feet in a passage of play that remains unforgettable.

The initial touch to control the ball is in itself sublime, but what occurs is an individual goal of genius from a great of his generation.

The long strides of the Liberian take him rapidly up the pitch on the counter-attack, as a swarm of yellow shirts bid to stop the striker in his tracks.

He receives a stroke of good fortune – essential for any glorious goal – as he comes out of an attempted sandwich whilst still in possession, before charging on once more to the last defender.

Somehow, after his lung-busting run so far, he finds the pace and energy to accelerate around a final challenge, before firing home a low finish to score one of Serie A’s most iconic goals.

Weah added a second Serie A title in the colours of Milan during the 1998/99 season, though his fortunes began to falter as coach Alberto Zaccheroni moved the forward to the wing in order to accommodate a younger frontline of Andriy Shevchenko and Jose Mari.

After 46 goals in 114 league appearances for Milan, he moved to the Premier League in search of a fresh opportunity, joining former Serie A stars Gianfranco Zola, Marcel Desailly and Gianluca Vialli at Chelsea.

The experience proved short-lived as he scored just five goals during a loan spell at Stamford Bridge, before his career came to a close with similar brief spells at both Manchester City and Marseille.

Post-playing Weah has remained a beacon of hope for the nation he so proudly represented, having been sworn in as the 25th president of Liberia in January 2018.

Weah’s role now is to make the world a better place for the people he represents, but in the mid-nineties he did that on a weekly basis for the fanatic followers of Serie A football.

The best player on the planet at the height of his career, Weah’s was an odyssey that saw him become arguably Africa’s favourite footballer.