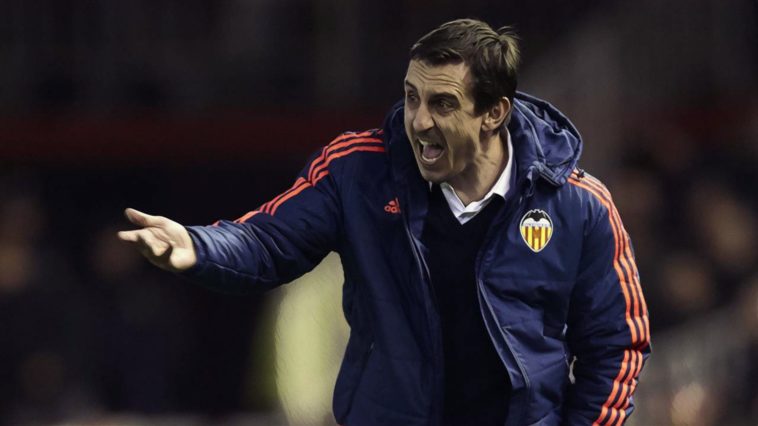 John Terry is understood to be amongst the names being considered by Bournemouth to become their new manager, the Championship side discussing the former England captain as a potential replacement for the sacked Jason Tindall.

Terry has been working as an assistant at Aston Villa for the past three years and could be the latest of the English players dubbed the ‘Golden Generation’ to move into management, a team of stars who enjoyed huge success at club level but ultimately failed to deliver with England.

Ahead of the former Chelsea defender’s potential move into management, we’ve decided to look at how the other members of England’s famed team of the mid-2000s have fared since moving into the dugout:

Gary Neville has enjoyed quite the reputation boost since retiring from a one-club career at Manchester United, the man non-Red Devils fans loved to hate emerging as a popular figure for his insightful punditry.

Neville moved from the pitch to the television screens in 2011 and after a shaky debut became a great watch, the experience of two decades at the highest level and eight league titles shining through with his analysis of the game.

After that success, however, he embarked on a new challenge after a surprise call from Spanish side Valencia, though would soon see management in a whole new light following a now infamous four-month spell at the Mestalla.

Valencia took just 14 points from their 16 league games under Neville’s management and he was dismissed with the team languishing in 14th, six points above the relegation places.

Taking on the challenge of one of Spain’s biggest clubs and a demanding fanbase, with little grasp of the language or managerial experience, proved unsurprisingly difficult.

Neville is yet to return to management and appears much more at home in the Sky Sports’ studio, his back-and-forth with unlikely sidekick Jamie Carragher coming much more naturally than coaching amid a language barrier.

Sol Campbell was a formidable defender at the peak of his powers for Arsenal and England, but the success of his playing career is yet to be matched following a difficult introduction to management.

Cambell has not been handed quite the same opportunities as those elsewhere on this list, beginning his ventures in the lower leagues with Macclesfield Town and later Southend.

His first position saw him take charge of a Macclesfield side five points adrift of safety in England’s fourth tier before leading them to a resurgence and survival, though the financial troubles engulfing the club led to his departure in August 2019 by mutual consent – just nine months after his appointment.

Campbell returned to management at Southend two months later but financial constraints once again hindered his ability to make an impact, joining a side struggling in the relegation places and unable to make any new additions in the winter window.

He left in June of last year after Southend had been relegated following the curtailment of the 2019/20 season, and remains without a club.

Campbell has been vocal in the lack of opportunities handed to BAME managers in recent years and says he is hopeful his next opportunity comes at a stable club which can provide him with a chance to build.

Frank Lampard’s latest managerial venture came to a high-profile end last month, the Chelsea legend’s dream return to west London having failed to have worked out as initially hoped.

In truth, Lampard’s name and association with the Blues provided him with an opportunity he was yet to earn, having spent just a single season in charge of second tier Derby Country.

Lampard guided the Rams to a sixth-placed finish and the Championship play-offs, a strong season but one that will have met, rather than exceeded, expectations from the club’s board.

Chelsea moved to appoint the club’s record goalscorer with the Blues under a FIFA-imposed transfer ban in 2019, the inexperienced coach jumping at the chance to return to Stamford Bridge and winning plaudits for his debut season in charge.

Lampard became the first Chelsea manager of modern times to make use of the club’s excellent youth system by providing opportunities to a number of impressive academy graduates, in addition to securing a top four finish and reaching the FA Cup final.

Expectations changed following an expensive summer spend on a host of new players, however, and after a concerning run of form he was removed by the ruthless Roman Abramovich, his legendary status not affording the 42-year-old any added patience from the Russian billionaire.

Few can blame Lampard for taking the Chelsea job, but it undoubtedly proved too much too soon and it remains to be seen how he rebuilds upon a potential return to the pressures of management.

Whilst the aforementioned names on this list are all now out of work, Steven Gerrard is beginning to make a name for himself north of the border at Rangers.

Gerrard was a high-profile but risky appointment for the Scottish side as they looked to rebuild and end Celtic’s domestic dominance, but after some difficult moments it appears that silverware is finally on the horizon.

It hasn’t all been plain sailing, Gerrard beginning by overseeing the club’s worst start to a league season in almost three decades and becoming the first Rangers manager in history to survive two full seasons without silverware.

Last season saw Rangers collapse disastrously after a quick-fire start to the season, but the patience of the board has been rewarded with a side three seasons in the making heading towards a first league title in a decade.

Gerrard has been stung by spectacular near-misses in his career, but Rangers are unbeaten in 27 league games, winning 24, and have opened up a margin of 23 points over defending champions Celtic whose hopes of winning a fabled 10 successive titles look all but over.

There’s been success in Europe too, reaching the Europa League knockout stages in successive seasons with Rangers’ achievements boosting Scotland’s co-efficient as they bid for easier access to Europe’s top table.

After being afforded time to make mistakes as a novice manager, Gerrard is now ever so close to ending Rangers’ long wait for success.

The most recent member of the ‘Golden Generation’ to try his luck at management, Wayne Rooney returned from a career swansong in MLS to become player-coach at Derby, the move designed with a view to moving into management.

Less than a year after moving to Pride Park he was handed the coaching reigns in his first senior role, a disastrous start to the Championship season seeing Phillip Cocu sacked with Derby in the midst of a relegation dogfight.

Rooney’s permanent appointment in November sparked an instant upturn in results with a six-game unbeaten run, before running into an indifferent period of form with three defeat in their next four.

Victory over promotion hopefuls Bournemouth sparked a run of three consecutive wins last month in a sequence that has since lifted Derby out of the bottom three, though there remains much work to be done with the Rams just two points outside the drop zone.

There were few who predicted Rooney would move into management following a career that saw him become the record goalscorer for both Manchester United and England, but it’s been an encouraging start for the 35-year-old in testing circumstances at cash-strapped Derby.