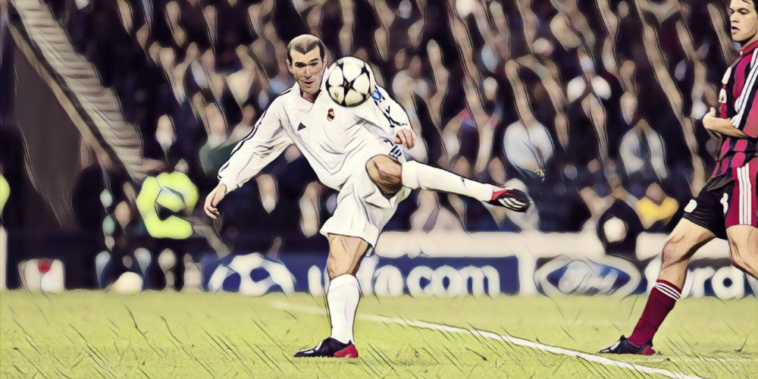 Both sides have a rich history in this competition having won 19 Champions League trophies between them, whilst the two have twice met in previous finals held in 1981 and 2018.

Both sets of players will be dreaming of leaving an unforgettable mark on football’s biggest stage, with Champions League finals of yesteryear having been lit up by moments of genuine genius.

Ahead of Saturday’s showdown we’ve decided to look back at five of the best goals scored in Champions League finals.

AC Milan’s 4-0 thrashing of Barcelona remains the biggest winning margin in a Champions League final, despite the Rossoneri heading into the clash as rank underdogs in the absence of key names including Franco Baresi, Alessandro Costacurta and Marco van Basten.

Milan faced a Barcelona side labelled as the ‘Dream Team’ for their achievements under Johan Cruyff, but the Catalans were dismantled in ruthless fashion in Athens.

Daniele Massaro’s first-half double put the Italian side in control, before Dejan Savicevic’s moment of magic put the result beyond doubt just two minutes after the interval.

When Dejan Savićević scored this insane goal vs Barcelona in the 1994 Champions League final. pic.twitter.com/VEKPo359Rv

Il Genio (The Genius) lived up to his billing with this exquisite lobbed finish, somehow lifting the ball from an acute angle over Andoni Zubizarreta, who had barely ventured from his goal-line.

Savicevic’s goal was the highlight moment of an unforgettable final performance, with Marcel Desailly beating the offside trap to net a fourth and seal Milan’s fifth European Cup success.

Steve McManaman became one of British football’s greatest exports after deciding to leave Liverpool for Real Madrid, becoming the first English player to win the Champions League with a foreign club.

McManaman twice won the trophy during his time in the Spanish capital, with the England international leaving his mark on the first-ever same country final as Real took on compatriots Valencia in 2000.

Fernando Morientes had opened the scoring at the Stade de France after heading home Michel Salgado’s cross at the back post, before McManaman – influential throughout – doubled the advantage with a majestic scissor-kick volley.

A trophy he lifted twice for Real Madrid…✌️pic.twitter.com/beimFIeLxD

Raul’s goal on the counter-attack sealed a 3-0 win for Los Blancos, who won the Champions League for a second time in three seasons.

Two seasons after their triumph over Valencia in Paris, Real Madrid returned to the final once more where they were faced with a Bayer Leverkusen side biding to upset the established order.

Leverkusen had eliminated Liverpool and Manchester United on their way to the final at Scotland’s Hampden Park, though the Germans saw hopes of a historic treble evaporate in a matter of days to finish as runners-up in the Bundesliga, DFB-Pokal and Champions League.

Real Madrid’s Galacticos proved too much for Leverkusen in the final, though needed one of the Champions League’s most iconic moments to secure a 2-1 victory against the plucky underdogs.

Raul’s eighth-minute goal had been cancelled out just five minutes later by Lucio for Leverkusen, but on the stroke of half-time the game changed with one swing of Zinedine Zidane’s left foot.

Zidane had arrived as the world’s most expensive footballer from Juventus the previous summer and delivered on that billing to end his debut season in sublime style.

Mario Mandzukic stands as an anomaly on this list, as the only player to have produced something special without taking home a winners’ medal.

The Croatian forward scored his sensational effort to equalise for Juventus against Real Madrid, though the Spaniards proved too good to become the first team to defend the trophy in the Champions League era.

Manduzkic’s goal undeniably deserves its place on this list however, capping a brilliant team move with a wonderful piece of improvisation to bring Juventus level.

Gareth Bale came off the bench to turn the 2018 Champions League final around for Real Madrid, scoring twice including a goal many regard as the greatest final strike of all time.

Bale had endured a frustrating season for the Spanish giants and was a notable omission from their starting team against Liverpool, but was called upon by Zinedine Zidane with the scores tied at 1-1.

Within two minutes of his introduction, Bale met Marcelo’s cross with an execution of perfect technique, timing and athleticism, his overhead kick flying beyond Loris Karis to restore Real’s advantage.

Bale struck a swerving second from distance as Zidane’s side made it three consecutive Champions League crowns and four successes in just five seasons.