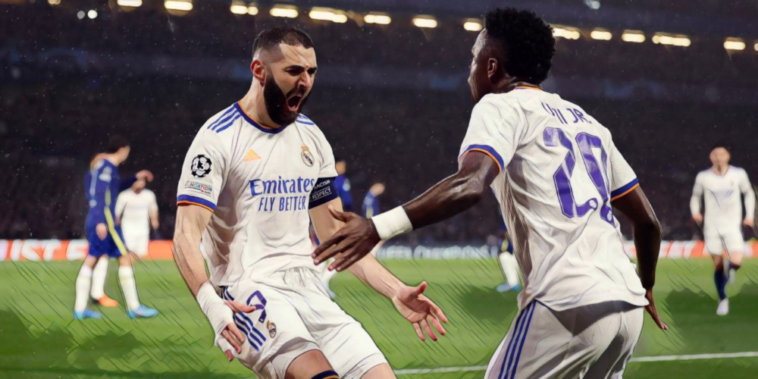 Ahead of this weekend’s meeting between Liverpool and Real Madrid, we look at five talking points ahead of the Champions League final.

Mohamed Salah has made no secret that revenge has added to his motivation ahead of this weekend’s final, following Liverpool’s 3-1 defeat to Real Madrid in 2018.

Following Real Madrid’s semi-final win over Manchester City, Salah wasted little time in taking to social media to send a clear message to their final opponents – “we have a score to settle.”

The message came after he openly spoke on his preference to face Real Madrid in Paris, following the events of their 2018 Champions League final meeting.

Salah was in the midst of a record-breaking season for Liverpool and had scored 44 goals in all competitions before that final, before his game was prematurely ended with a shoulder injury in the first half.

The Egyptian described the incident – which occurred following a controversial tangle with perennial pantomime villain Sergio Ramos – as the ‘worst moment’ of his career and the 29-year-old will more motivated than most to fire Liverpool to a seventh European Cup this weekend.

Karim Benzema’s career-best season has put the forward on the brink of the Ballon d’Or, his performances having reached new levels and carried Real Madrid through to the Champions League final.

Benzema has scored 44 goals in 45 appearances for Los Blancos this season, including a staggering 15 goals in the Champions League alone.

Devastating hat-tricks against Paris Saint-Germain and Chelsea were followed with a starring role across two legs in the semi-finals, his three goals against Manchester City including an audacious Panenka penalty at the Etihad.

Benzema and Vinicius Jr. have been involved in 100 goals combined this season 🤯 pic.twitter.com/J9IeTaTrir

The 34-year-old is arguably the most influential player in world football right now and another decisive contribution will make his case for the Ballon d’Or impossible to ignore.

Behind him in the betting, though admittedly by some distance, are Mohamed Salah and Sadio Mane and the latter’s case could be be particularly strong should Liverpool prevail.

After winning Player of the Tournament to help Senegal to a first-ever Africa Cup of Nations, he is on the verge of a cup treble at club level.

Ancelotti and Thiago out to make history in Paris

Carlo Ancelotti and Thiago Alcantara will face off on opposite sides at the Stade de France, though each stand on the edge of making history in the French capital.

Real Madrid manager Ancelotti became the first coach in history to win league titles in each of Europe’s five major league this season and could now become the first man to manage sides to four Champions League trophies.

🔝 Carlo Ancelotti will become the first man to coach in five European Cup finals – and possibly the first to win four…#UCLfinal pic.twitter.com/w6xzsxcoTC

The Italian is level on three winners’ medals alongside Bob Paisley and Zinedine Zidane, though success for Real Madrid will be his fourth Champions League win after previous successes with AC Milan (2003 and 2007) and during his first spell at the Bernabeu (2014).

Thiago is facing a race to be fit for the final, though the Liverpool midfielder could become just the second player to win the Champions League with three different clubs this weekend.

The Spaniard was an unused substitute during Barcelona’s 2011 final win over Manchester United, before starring during Bayern Munich’s victorious campaign in 2019/20.

He could join Clarence Seeforf (Ajax, Real Madrid and AC Milan) in achieving the unique feat.

Vinicius vs Trent the key duel

The battle on the flanks between Vinicius Junior and Trent Alexander-Arnold shapes as a key clash in the final.

Vinicius was outstanding in Real Madrid’s 3-1 win over Liverpool in last season’s quarter-finals, scoring twice in the first leg win at the Bernabeu.

Liverpool’s system is such that the space to exploit is often found in behind Alexander-Arnold, whose elite forward threat offers a balancing act the Reds must attempt to cover.

Real Madrid continually exposed those gaps with long diagonal balls in last season’s meeting, first releasing Vinicius to score the first, before a mistake from a back-peddling Alexander-Arnold gifted Marco Asensio a second.

Vinicius has reached new levels this season to star alongside Karim Benzema among La Liga’s finest players, with his 27 combined goals and assists bettered only by the Real Madrid captain.

However, Liverpool now boast a far more solid defensive line-up than the partnership of Ozan Kabak and Nathaniel Phillips, with the former relegated with Norwich this season and the latter loaned out to Championship Bournemouth.

Those upgrades at centre-back will be crucial to helping Alexander-Arnold deal with the threat of Brazil’s fast-emerging star.

After the makeshift defence of last season, Liverpool now boast an embarrassment of riches at centre-back and Jurgen Klopp faces a major decision on his defenders this weekend.

Virgil van Dijk is certain to start, but who partners the Dutch defender remains a source of contention.

Joel Matip has been one of Liverpool’s finest performers during the current campaign and is the more experienced option, though the Cameroonian has had a watching brief for much of the Champions League’s latter stages.

Klopp has preferred Ibrahima Konate in Europe, with the summer signing from RB Leipzig starting seven of the last eight Champions League games, including both legs of the quarter-finals and semi-finals.

Konate: “I think it’s the final definitely going to be the best moment of my life – I don’t have any children yet so I can’t be sure – but I think it will be the greatest moment. The Champions League final. In Paris. My home. If I tried I couldn’t have dreamt of anything better.” pic.twitter.com/fN0j8WsKUV

The Frenchman has barely put a foot wrong and his athleticism is invaluable to the Reds high defensive line, particularly given the gaps that will be left by the club’s forward-thinking full-backs.

Konate’s speed and strength could earn the nod once again for the final, given the counter-attacking threat of the aforementioned Vinicius Junior.