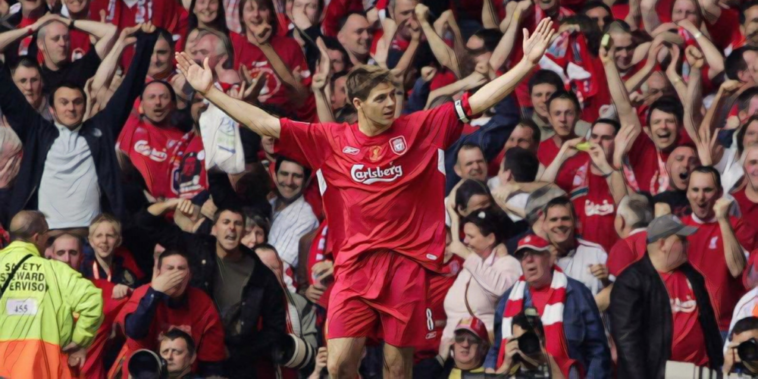 All across the world there are budding young footballers with dreams of reaching the very top, fanatical fans who fantasise about one day representing the club they love and inspiring their side to success.

Rarely has a footballer ever lived out childhood dreams in such a manner as Steven Gerrard, a footballer who became emblematic of boyhood side Liverpool and arguably the greatest player to have adorned the club’s red colours.

Gerrard was raised as a die-hard supporter of his hometown side in an era in which Liverpool dominated both at home and abroad, but the version of the side he emerged into from the academy ranks paled in comparison to the trophy-winning teams of yesteryear.

The nineties had been a difficult time for Liverpool who struggled to compete regularly for silverware, arch-rivals Manchester United replacing the Reds as England’s dominant force as trophy after trophy headed to the opposite end of the East Lancs Road in the early Premier League era.

Hope was raised as a clutch of local youngsters made a fine impression on the senior side, however; Steve McManaman, Robbie Fowler and Michael Owen amongst those to emerge before Gerrard’s arrival into the senior side.

Each caused great excitement amongst the Anfield faithful, but none resonated with the supporters quite like Gerrard at the peak years of his career, a player who often singlehandedly carried the weight of expectation on his shoulders.

After breaking into the side in the late nineties he became an integral part of Gerard Houllier’s side at the turn of the millennium, being named as the PFA Young Player of the Year after helping Liverpool to a treble of cup successes in 2000/01.

He continued to grow in stature and status as Liverpool made their first inroads into the Champions League, returning to the elite of club football the following season after a more than decade in the doldrums.

Gerrard’s early seasons saw him become a whirlwind of box-to-box energy and aggression, his unwavering determination to succeed at times seeing him cross the line and become rash and reckless.

Houllier, however, knew he had a star amongst his ranks and named Gerrard as captain, replacing the more senior Sami Hyypia and taking on the armband permanently aged just 23.

Whilst Houllier undoubtedly played a major role in his development it was successor Rafael Benitez who enjoyed the best years of his career, his first campaign in charge seeing Gerrard prove inspirational as Liverpool upset the odds to win the Champions League in stunning style.

The images of Gerrard hoisting aloft club football’s biggest prize are ingrained into the club’s folklore, but it is his showing in the FA Cup final a year later that was perhaps the defining display of the midfielder’s career.

Liverpool faced West Ham in the final FA Cup showpiece to be held at Cardiff’s Millennium Stadium, a ground on which the Reds had enjoyed much success in previous seasons and Benitez’s side headed into the clash as firm favourites.

It proved far from the procession some expected however, as Liverpool needed their real-life Roy of the Rovers to drag them through a thriller in South Wales.

The afternoon could hardly have began worse for Liverpool as Jamie Carragher inadvertently gave West Ham the lead, the defender failing to sort his feet and deflecting Lionel Scaloni’s cross into his own goal.

Seven minutes later, it was two.

Pepe Reina continued a nervy start for the Reds and spilt Matthew Etherington’s low drive, allowing Dean Ashton to turn home the rebound and spark delirium amongst the Hammer’s contingent at the opposite end of the ground.

Liverpool needed an instant response and they got one, Gerrard’s exquisite long pass from just inside the West Ham half turned home by Djibril Cisse to halve the deficit heading into the interval.

Buoyed by their response, Benitez’s side drew level just nine minutes after the restart and it was Gerrard who levelled proceedings, slamming home an unstoppable finish that gave Shaka Hislop no chance.

Xabi Alonso’s lofted pass was cushioned down by the towering Peter Crouch, with Gerrard reacting first to the loose ball to fire a ferocious half-volley beyond the goalkeeper.

Gerrard had dragged a below-par Liverpool back into the contest on one of football’s biggest stages, but would need to dig deep again after West Ham showed mettle of their own to retake the lead.

Paul Konchesky’s mishit cross evaded everyone to nestle its way into the net, looping over Reina to leave Liverpool with just 26 minutes to avoid an ignominious defeat in Cardiff.

As the seconds ticked on an equaliser appeared more and more unlikely, Liverpool pushing forward continually without making inroads behind a packed West Ham defence.

For all the huff and puff of the Reds’ forward options, the Hammers had an answer and the Claret and Blue resistance looked set to cause one of the great cup final shocks.

That was, of course, until one stunning swing of Gerrard’s boot changed the course of FA Cup final history.

The midfielder had been seen visibly struggling with cramp as the final moments approached, a pulsating end-to-end clash on a sun-basked afternoon in South Wales sapping every ounce of energy from the Liverpool captain.

As the Millennium Stadium’s stadium announcer came on to announce a minimum of four minutes of added time, the narrative changed in spectacular fashion.

John Arne Riise’s hopeful punt into the West Ham box was headed clear with the bouncing ball dropping invitingly to Gerrard some 35 yards from goal.

What followed was an execution of perfect technique as the Reds’ captain hit a wondrous first-time effort, a strike of implausible precision and power that whistled past Hislop to force extra-time.

Liverpool had needed a hero and found one in their inspirational number eight.

The two sides both squandered chances in the added period to snatch the trophy, leading to the lottery of the penalty shoot-out following a breathless 120 minutes of action.

For the second successive season, Liverpool had come back from the brink to draw a major final 3-3 and history would repeat itself as the Reds held their nerve from the spot.

Gerrard was one of three Liverpool scorers from the spot as Reina’s redemption was completed with saves from Bobby Zamora, Konchesky and Anton Ferdinand, Liverpool crowned winners in Cardiff following one of the all-time great cup finals.

“I was looking round at my teammates, I could see there wasn’t much left. I thought, ‘we’re done, it’s over’.

“Usually, that far out, I’d try and set the play out wide to get a cross in and think about the team, but I was that tired I just thought, I’ll gamble.”

Good players are capable of game-winning moments, but great players produce them when it really matters most.

In the midst of the pressure, Gerrard was a player who often thrived, his virtuoso FA Cup final performance seeing him become the first, and so far only, player in history to score in Champions League, UEFA Cup, League Cup and FA Cup deciders.

Gerrard’s performance in that 2006 FA Cup final was one of several which forged his legend at Anfield, a showing that ensures the showpiece will forever be remembered as the ‘Gerrard final’.

It’s a fitting tribute for a player who often fulfilled the dreams he shared with the Liverpool supporters, perhaps never more so than his inspirational Cardiff comeback.