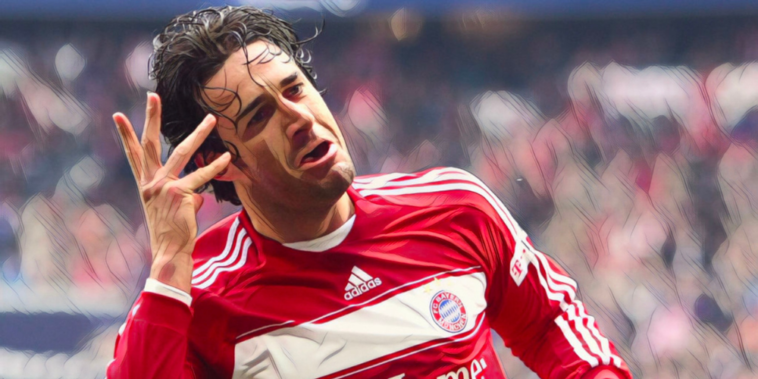 Luca Toni scored goals at each stop of a truly unique career, one which saw him become both a literal and figurative giant of Italian football.

Far from a forward destined for greatness during the infancy of his career, Toni’s route to stardom was a slow burner, a trail blazed initially in the lower leagues of Italy before earning his big break.

Unfashionable and often unrefined, he was a traditional centre-forward in the truest sense, one who came alive inside the penalty area but cared little for events outside of it.

Toni’s career lasted for more than two decades and saw him change clubs on no less than 16 occasions, a footballing nomad who earned his stripes in modest environments before conquering the highest levels of the game.

Toni was 23 when he made his Serie A debut, having already represented six clubs across the lower divisions before his top-flight bow with Vincenza.

In typical Toni fashion, he spent just one season with the club before moving to Brescia, where he featured alongside Roberto Baggio and Pep Guardiola and enjoyed a breakthrough campaign in 2001/02.

He scored 13 league goals and finished as Brescia’s leading scorer, but was unable to build on that promising campaign during an injury-hit second season, in which he scored just twice.

Once again he was on the move and chose to drop back down a division, joining an ambitious Palmero side who had agonisingly missed out on promotion the previous season.

It proved a perfect fit. Toni fired Palermo into Serie A for the first time in three decades, as the club’s faith was repaid with a 30-goal campaign from the imposing figurehead signed the previous summer.

Toni’s contribution to Palermo’s title-winning campaign proved the start of a spectacular period, with his first season back in the top division producing 21 goals in all competitions to lead the Sicilian club to UEFA Cup qualification.

A record of 50 league goals in 80 appearances for Palermo predictably brought interest from rival clubs and after two seasons with I Rosanero, Toni signed for Fiorentina in a €10 million deal.

The change from the pink of Palermo to the violet colours in Florence did little to slow Toni’s goal record, with the 2005/06 campaign proving one of record-breaking success.

Toni scored 31 league goals during a stunning first season with Fiorentina, finishing as the leading scorer in Europe and becoming the first player to break the 30-goal barrier in Serie A for 51 years.

He became the first Italian to win the European Golden Shoe, with his goals securing continental football for La Viola for the first time since the club’s climb back through the divisions.

Toni was a menace to Serie A’s best defences, boasting brutish power and a ruthless touch. His game was one built on raw strength and instinct, with a knack of finding himself in the right place at the right time.

The phrase “corridor of uncertainty” is used to define a cross perfectly placed between the goalkeeper and last line of defence, an area which causes indecision and panic inside the box.

Perhaps the only certainty was that Toni would be aware and waiting, ready to use whatever means necessary to bundle the ball over the line.

Willing to throw his head into areas others wouldn’t place their feet, he often received the just rewards for his bravery before wheeling off in trademark celebration, hand whirling beside his ear.

There has been no shortage of Serie A forwards with more elegance than Toni, but few who have shown such mercilessness.

Toni was included in the Italy squad that travelled to the 2006 World Cup that summer, having been handed his international debut during Marcello Lippi’s first game in charge two years earlier.

Handed the number nine shirt, he was an instrumental figure in Italy’s run to the final in Germany. Toni scored twice in the quarter-final win over Ukraine and was named in the World Cup’s team of the tournament after helping the Azzurri to become world champions for a fourth time.

Despite featuring in a squad containing the natural talents of Francesco Totti and Alessandro del Piero, Toni’s contribution to the cause was invaluable for Lippi and his victorious side.

Toni’s towering frame made him a handful for any centre-back in the competition, swatting aside challenges and bringing others into the game as the Azzurri’s focal point. Willing to battle and bully defences singlehandedly, he was the ideal outlet.

Returning to club football as a World Cup winner, he spent just one further season at Fiorentina before earning a move to one of Europe’s elite.

Bayern Munich came calling, capitalising on the chaos of the Calciopoli scandal to tempt Toni from his homeland for the first time.

Toni, just days after his 30th birthday, was unveiled as the latest star signing in Bavaria and soon took the Bundesliga by storm. He scored 39 goals in all competitions, finishing as the leading scorer in both the league and UEFA Cup as he fired Bayern to a domestic treble.

His haul included both goals in the 2-1 win over Borussia Dortmund in the DFB-Pokal final, while a return of 12 assists demonstrated his all-round importance to the club’s treble-winning campaign.

Bayern had missed out on Champions League qualification during a disastrous 2006/07 season, but Toni’s goals had propelled the perennial powerhouse back to the summit of German football.

His time as Bayern’s brutish penalty-box poacher was another period which again proved too brief, as an injury-hit second season – in which he still contributed 14 league goals to finish as the club’s leading scorer – proved the beginning of the end.

A fall-out with Louis van Gaal then brought a premature end to his German adventure and a return to home comforts beckoned. He moved to Roma on an initial loan deal, before short spells with Genoa, Juventus, Al-Nasr and Fiorentina brought mixed results.

Reaching his late thirties, the career of Toni was reaching a predictable conclusion with the forward appearing a fading force.

However, a move to newly-promoted Verona brought a remarkable renaissance. Across three seasons one of football’s great late bloomers enjoyed the latest of Indian summers, adding another chapter to the captivating career of an Italian icon.

Even as his attributes became increasingly unsuited to modern football’s evolution, Toni – a throwback centre-forward – enjoyed one last hurrah.

He breached the 20-goal barrier in consecutive Serie A campaigns for Verona, the second of those seeing Toni become the oldest footballer to win the Capocannoniere. At the age of 38, he had outscored fresher contemporaries and proved that sometimes the old tricks remain the best.

He retired the following season after Verona were relegated from the top tier, calling time on a career that saw him score 322 goals in 705 games.

Tactical trends have dictated that players of Toni’s ilk are now few and far between, unsuited to the high-intensity football of the modern era. Across more than two decades, however, he utilised the best of his attributes to become one of the most effective forwards of a generation.

Should there again be a time where coaches favour a towering target-man as their weapon of choice, tales of Toni’s nomadic goal-getting can provide the perfect blueprint for success.