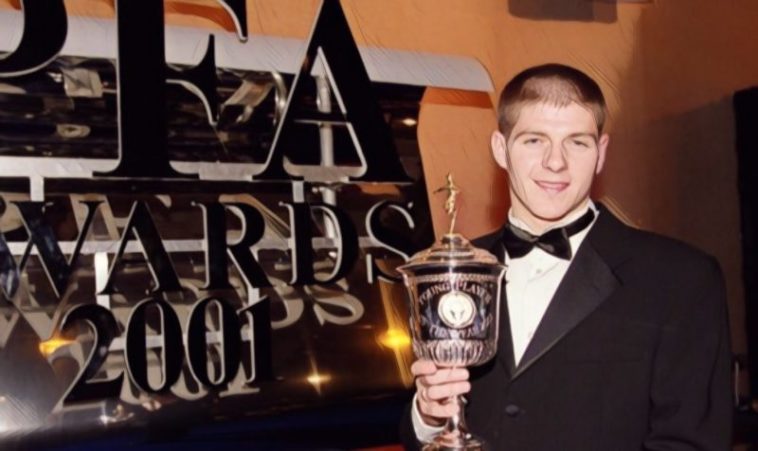 Our next look at the PFA Young Player of the Year award takes us to the turn of the millennium, remembering the players voted as the most promising young talents in English football during the Premier League era.

There is no greater individual recognition than to be voted as the division’s best by your fellow professionals, and we’ve decided to look back at the history of the award and its winners during the 2000’s.

Here is every PFA Young Player of the Year from the noughties:

The late nineties and early 2000’s saw the emergence of an exciting young Leeds team under the guidance of David O’Leary, the Irishman having overseen steady progress at Elland Road after being named as the successor to the departed George Graham.

O’Leary’s youthful side contained promising talents such as Alan Smith and Jonathan Woodgate but it was arguably Australian forward Kewell who was the jewel in the crown, scoring ten league goals and providing a further 12 assists as Leeds secured a third-place finish and qualification for the Champions League.

Kewell worked brilliantly in tandem with summer signing Michael Bridges and finished with 20 goals in all competitions as Leeds also reached the semi-finals of the UEFA Cup, becoming just the second player from outside the UK and Ireland to be named as the PFA Young Player of the Year.

Casualness personified here by former Leeds star Harry Kewell. The audacity to hit it with the outside of his boot from there! A stunner from the Aussie midfielder. @HarryKewell– Leeds United vs Sheffield Wednesday 1999/2000 pic.twitter.com/Rupt9uTmLs

Steven Gerrard had shown promise after coming through the academy ranks at boyhood side Liverpool before enjoying a breakthrough campaign during 2000/01, a season which saw the Merseyside club win a treble of trophies under the management of Gerard Houllier.

The midfielder formed part of a young core of British talent in Houllier’s side, including the likes of Michael Owen and Jamie Carragher, as the Reds lifted the FA Cup, League Cup and UEFA Cup in a memorable campaign.

Gerrard scored ten goals in all competitions, including a stunning strike from distance against Manchester United and a goal in the thrilling UEFA Cup final victory over Alaves in Dortmund, the first of several cup final goals he would score throughout an illustrious Liverpool career.

The former England captain was also named as the Premier League Fans’ Player of the Year and included in the divisional Team of the Year for the first time, whilst he later won the senior PFA award after a stellar individual season in 2005/06.

Having raised optimism on Tyneside following his arrival as manager at St James’ Park, Sir Bobby Robson bolstered his squad with the summer addition of Craig Bellamy from Coventry.

The fiery forward had impressed despite Coventry’s relegation during his sole season at Highfield Road, but soon began to establish himself as a Premier League player in the North East.

Bellamy’s electric pace complimented the veteran Alan Shearer as Newcastle enjoyed a season to remember, leading the league at the turn of the year before eventually securing a fourth-placed finish and Champions League qualification.

The Welshman finished the season with 14 goals in all competitions to be named as the divisions best young player, beating off competition from Bolton’s Michael Ricketts and reigning winner Steven Gerrard.

Another of Newcastle’s exciting young side to be recognised at the PFA awards, Jenas signed for the club from Nottingham Forest before following Bellamy in winning the Young Player of the Year award in his debut season at St James’ Park.

Jenas had become the second most expensive teenager in English football history when making the move to Newcastle and quickly established himself as a mainstay in Robson’s team, producing a series of impressive performances as the Magpies secured Champions League qualification for a second successive season.

Jenas scored six league goals and his season was recognised by his fellow professionals as he scooped the prestigious honour, finishing ahead of Wayne Rooney and teammate Bellamy to win the award.

Parker was into his fifth full season as a first-team regular at Charlton when he was named as the PFA Young Player of the Year in 2004, the midfielder’s tenacious style and full-blooded commitment having made him a popular figure after coming through the club’s academy ranks.

Parker’s performances soon drew admirers and he would leave the club to join billionaire-backed Chelsea midway through a season in which he was named as the Premier League’s best young player, helping the west London side to a runners-up finish over the second half of the campaign and earning his first senior cap for England.

The midfielder helped Chelsea to the league title under Jose Mourinho but a lack of opportunities saw him move on to Newcastle, later having spells at the likes of West Ham, Tottenham and Fulham as he made his way through a succession of capital clubs.

His best period came during a four-year spell with the Hammers, winning the club’s Player of the Year award in three consecutive seasons and being named as the FWA Footballer of the Year despite the club’s relegation in 2011.

Wayne Rooney had made a huge impression on English football following a brilliant breakthrough at Everton, establishing himself as the most exciting young talent in the Premier League and as a senior international with England.

The teenager starred during the 2004 European Championships to earn a record-breaking move to Manchester United, becoming the most expensive teenager in history and making an instant impression with a debut hat-trick in the Champions League against Fenerbahce.

Rooney’s first season at Old Trafford saw the forward score 17 goals in all competitions to be named as the PFA Young Player of the Year, before becoming just the third player – after Ryan Giggs and Robbie Fowler – to retain the accolade the following year.

That season saw Rooney score 19 goals in all competitions as United finished as runners-up, his performances also earning the Premier League Player of the Season honour and inclusion in the PFA Team of the Year for the first time.

Rooney’s career saw him win every major honour in club football and secure six Premier League titles, becoming the record goalscorer for both Manchester United and England and claiming the senior PFA Player’s Player of the Year award in 2010.

Throwback to when Rooney went from arguing with the ref to scoring an absolute worldie🤣 pic.twitter.com/1oWGHfhPg5

Manchester United made it three successive Young Player awards during the 2006/07 campaign, as Cristiano Ronaldo enjoyed a record-breaking season at the forefront of Sir Alex Ferguson’s title-winning team.

The Portuguese international had arrived in English football as talented but raw winger three years earlier, before exploding during a memorable season that saw Ronaldo establish himself amongst the world’s finest footballers.

Ronaldo finished the season with 23 goals in all competitions to help inspire United to a first league title in three years, silencing those who had doubted his end product during his initial seasons in the Premier League.

The 22-year-old became just the second player – after Aston Villa’s Andy Gray 30 years earlier – to win both the PFA Player of the Year and Young Player equivalent in the same season, and the first player in history to win six individual accolades in one campaign – adding the FWA Footballer of the Year and Premier League Player of the Season to his list of achievements.

The departure of Thierry Henry to Barcelona during the summer marked the end of an era at Arsenal and a new collection of young talent were tasked with leading the club forward, with Spanish midfielder Fabregas the stand-out star.

Fabregas had been plucked from Barcelona’s fabled La Masia academy system as a teenager and had quickly established himself in English football, enjoying a brilliant season to be named as the PFA Young Player of the Year in 2007/08.

The playmaker scored 13 goals in all competitions as Arsenal contested with Manchester United and Chelsea for the title, becoming the central figure of Arsene Wenger’s new look side at the Emirates.

The Spaniard’s performances included a north London derby winner and vital late equaliser at Liverpool, Fabregas recognised with inclusion in the PFA Team of the Year and named as the Premier League’s outstanding young player.

Fabregas later returned to Barcelona before winning two league titles at Chelsea, whilst only Ryan Giggs has registered more than his 111 assists in the history of the Premier League.

The latter stages of the noughties saw Aston Villa regularly compete towards the top end of the Premier League, as Martin O’Neill guided the Midlands side to three successive sixth-placed finishes.

Amongst a collection of exciting young talents at Villa Park was winger Ashley Young, who starred after arriving in a club record deal from Watford in 2007.

Young had impressed in being named in the PFA Team of the Year in 2007/08 – registering 17 assists – before continuing his upwards trajectory by earning back-to-back inclusions and the PFA Young Player of the Year award in 2008.