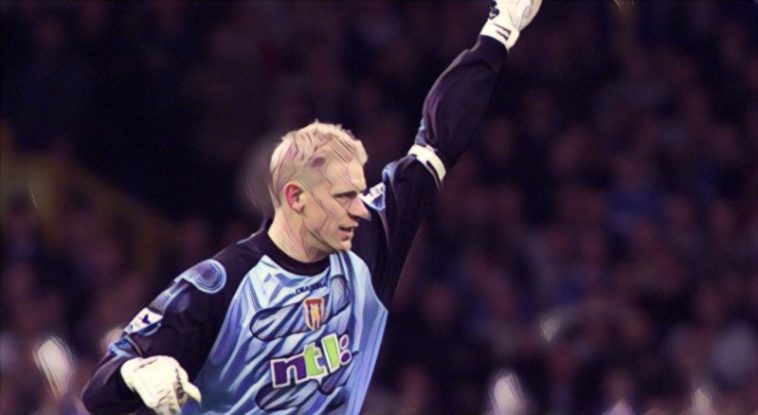 Football occasionally throws up some weird anomalies such as a Goalkeeper scoring a goal. This rare sight just gives us a glimpse of how unpredictable, mad and chaotic this sport gets. In Football, there are few sights more exciting than when a Goalkeeper is granted permission to go up for a late corner.

Of course they hardly ever touch the ball let alone score, but they always cause panic and uncertainty amongst opposition defenders.

Since the inception of the English Premier League, five Goalkeepers have found the back of the net. So, let’s look back at these bizarre and rare moments where the ‘keeper found himself on the scoresheet.

Peter Schmeichel, arguably one of the best Goalkeepers that the Premier League has ever seen scored for Villains against Everton in 2001. Schmeichel is no stranger in front of goal as he had already notched a total of 8 goals for his previous clubs Manchester United, Hvidovre and Brondby. The Denmark international also scored once for his country in 2000.

Aston Villa were trailing 3-1 to Everton when Schmeichel was called up for a corner. Lurking at the back post, Schmeichel volleyed home to celebrate a extraordinary ninth goal of his club career. The goal proved to be just a consolation though as Villa lost at the Goodison Park.

Brad Friedel was about 50 years of age at this stage of his career, but the USA veteran showed quick reactions to tuck the ball away from the edge of the six-yard box. It looked like Friedel had earned Blackburn a stunning point away at Charlton in the dying moments of the game.

But, in a cruel twist of fate, the mass celebrations of Friedel’s goal were cut short as Claus Jensen scored an even later goal for Charlton to snatch all three points.

We had all grown accustomed to the mammoth kicks by England International Paul Robinson, yet no one was prepared for such a magnificent punt from Robinson. Watford’s Ben Foster was the man left red faced by his English compatriot Paul Robinson. Goalkeepers scoring from punts upfield isn’t very frequent but still is a delightful sight to watch.

Robinson launched a free-kick from deep inside his own half towards the Hornet’s box which evaded the Watford defenders bouncing over Foster and nestling into the net. The match ended with a comfortable win for Tottenham courtesy of goals from Robinson, Hossam Ghaly and Jermaine Jenas.

A wind swept Goodison Park and a freak bounce colluded to make Tim Howard the fourth Goalkeeper to ever score in Premier League history. With the score tied at 0-0, what was supposed to be a clearance from 92 yards away from the Bolton goal turned catastrophic for the Trotters when a gust of wind made the ball travel faster than anticipated and was helped by an astonishing bounce, which took it past Bogdan and into the empty net.

Howard was as bemused as Adam Bogdan himself- albeit for different reasons. In a befitting twist of fate, Everton surrendered their lucky lead, losing to Bolton 2-1.

One of the most surprising moments in Premier League history was Asmir Begovic’s goal for Stoke against Southampton, 13 seconds into the match. Begovic’s clearance cleared the Southampton defence before devilishly bouncing over Artur Boruc.

The ball looked destined to be collected by Boruc, but took a bounce took him off guard before ending into the net. The Serbia international ‘keepers goal is remembered as one of the most bizarre goals ever seen in the English top flight.