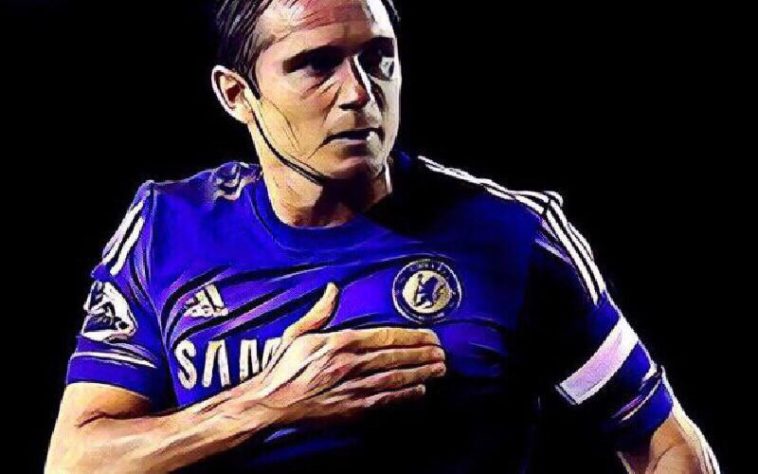 There are some players you just have to respect. You might not support the team they play for, you might not even have liked the player themselves at some point, you may have even have shouted or sang unsavoury songs about him at games but, through their exploits on the pitch, you come to respect and appreciate them. One of the most consistent and successful players to grace the Premier League, Frank Lampard retired recently and it’s only right that we include him in our Legend series.

Frank was always destined to play at the top level, his father, Frank Sr. was also a professional footballer who played for West Ham from the late sixties to the mid eighties and his son followed his path at the beginning of his career, joining the Hammers’ youth set up in 1994.

He broke in to the first team in the 96/97 season and by the following year was a regular in the side. Over the next four seasons he began to show some of the qualities that that would later mark him out as an all time great, namely scoring lots of goals. Despite playing in midfield he was regularly contributing where it counted and he was among the teams top scorers at the club every year helping the Irons to an Intertoto cup win and their highest ever Premier League finish along the way.

In 2001 though it was time to move on, at West Ham he was known as Frank Lampard’s son and the young midfielder was keen to make a name for himself. He secured an eleven million pound move to Chelsea and the rest, as they say, is history.

“One of my best players ever, one of my best professionals ever, a Chelsea legend and a legend in the Premier League.”
– Jose Mourinho
Apart from his eye for goal one of the most impressive aspects of Lampard’s career was his consistency. Right from the start at Chelsea he was an ever present. In his first season with the Blues he played in every single league game, scoring eight goals. The following season he reached double figures for the first time helping Chelsea to second place behind Arsenal’s Invincibles and also chipped in with four in the Champions League where they were unlucky to go out in the semi final.

At this stage Roman Abramovic was the owner of the club and big name players were arriving regularly but Frank Lampard was indispensable. For the third season in a row he played in every single League game and his thirteen goals and sixteen assists were instrumental in Chelsea walking to the league title in 2005.

It was Chelsea’s first title in fifty years but he wasn’t done yet. They also won the League cup that season and once again managed to reach the semi final of the Champions League with Frank’s goals against Barcelona and Bayern Munich helping his side to get that far. It was no surprise that he won Footballer Of The Year that season and for many players, all of that would have been enough to reach legendary status but Lampard was only getting started.

The next season he bagged sixteen league goals, helping Chelsea to back to back titles and was named in the FIFA World XI, he was also runner up to Ronaldinho for the Ballon d’Or and World Player of the Year awards. Going in to the 2006/7 season Lampard took over the club’s captaincy in the absence of the injured John Terry and continued to find the net with remarkable regularity. His six goals in the FA Cup helped them to lift the trophy with Lampard setting up the winning goal in the final and his goals in the league brought him past Denis Wise as the clubs all time highest scoring midfielder.

The 2007/8 season saw Lampard out injured for a long period for the first time in his career but even then he still managed to net his 100th goal for Chelsea and drag them to the Champions League final. On their way to the final he scored the winning goals against Fenerbache and Liverpool in the quarter final and semi final respectively, the latter a 98th minute penalty just one week after the death of his mother. In the final Chelsea eventually lost to Manchester United on penalties after the game finished 1-1. Obviously it was Frank’s equaliser that took them to extra time.

The next season saw Lampard sign a contract at Chelsea that made him the highest paid player in the league at the time and he repaid the club by reaching a number of incredible milestones. He scored his 150th career goal, his 100th Premier League goal, he reached his 400th appearance for Chelsea, he scored the winning goal in the FA Cup final and chipped in an invaluable 20 goals and 19 assists over the course of the season. It was the fourth consecutive season in which he had scored at least 20 goals. In the 2009/10 season, he was even better, Scoring 27 goals and leading Chelsea to a league and cup double.

Consistency, it’s the word we keep coming back to and its the thing that made him so valuable, so it’s no coincidence that when Lampard was eventually forced from the starting XI due to injury for a sustained period, his team suffered. The 10/11 season was a baron one for the Blues as Lampard was kept out, first by a hernia and then a serious muscle injury that saw him out for four months. When he played though, he scored, he still managed 11 goals despite his absences.

The following season he was back on the pitch and Chelsea were back among the silverware. Lampard was exceptional once again as he drove Chelsea to their first ever Champions League win. His work, especially in the semi-final second leg against Barcelona, when they went down to ten men and two goals down early in the game, was pivotal as he set up the equaliser to take them in to the final in what was a true upset. He captained the side to victory against Bayern Munich and also won his fourth FA Cup that season, once again providing the key pass to win the game.

2012/13 was to be another season of landmark achievements for Frank Lampard at Chelsea. He notched up his 500th appearance for the club, became the club’s all time top scorer in the FA Cup as he scored his 26th goal in the competition and with his 202nd Chelsea goal, which came against Aston Villa, he became the side’s outright top scorer of all time, breaking Bobby Tambling’s record which had stood since 1970. And of course, he won a trophy. Captaining his team to the Blues’ first ever Europa League title.

“Frank is a fantastic player, but he is also a gentleman off the field. He plays in midfield like a striker and that is why he joined my club – the 200 club – and has now overtaken me. He is probably the best player Chelsea have ever had.”
– Bobby Tambling
At this stage, even Frank was starting to slow down and his game time began to dry up, he was still used as a vital squad player and he still kept on scoring, reaching the 250 career goal mark the next season and moving up to fourth in the Premier League goal scoring list, ahead of “goal machines” like Thierry henry and Robbie Fowler but as the season drew to a close so did his time at Chelsea.

Frank still had plenty to give to the game and eyed a move to MLS where Manchester City’s expansion club, New York City were interested, it was decided he would sign for City while the MLS was in the off season but controversy soon reigned as he ended up staying at the Manchester club even after their season began.

Frank managed six goals in his time at City the first of which came against, you guessed it, Chelsea. They should have seen it coming. Chelsea were 1- 0 up going in to the closing stages of the game when Lampard came on as a substitute, the ball went loose in the box and there he was, doing what he had done a hundred times before in a darker shade of blue, volleying the ball into the net following a run from deep that no-one was watching. It was classic Lampard, it had rescued a point but he couldn’t bring himself to celebrate.

Lampard did eventually spend some time in MLS but he will forever be linked with Chelsea, an incredibly intelligent player who won every honour there is in the club game, his goal scoring feats for his club will likely never be repeated and even in the wider game, he is one of only seven players to score more than 150 goals in the premier league and the only midfielder on that list.

His record of 164 consecutive appearances will almost certainly never be beaten and that is a testament to the high level to which he was able to play year in year out in a sparkling career that can only really be appreciated now that he has retired. There’ll be a statue of him around Stamford Bridge soon, Frank Lampard, a true Chelsea Legend.