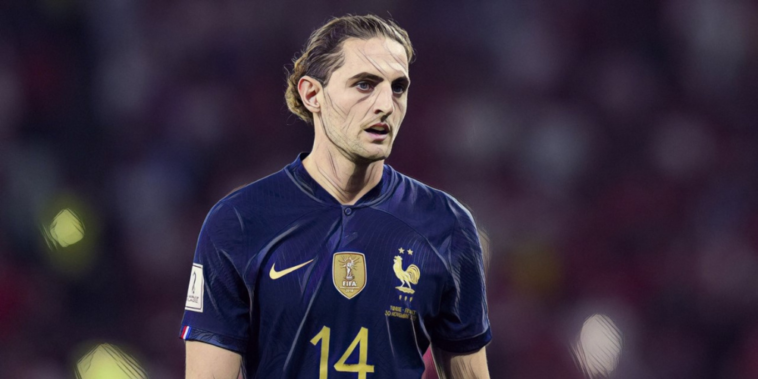 Adrien Rabiot has opened up on his ambitions to play in the Premier League, following a failed move to Manchester United last summer.

Rabiot came close to signing for Manchester United during the summer transfer window, but the move broke down during negotiations over personal terms. The midfielder also spent time in Manchester City’s academy as a teenager, before returning to start his career in his native France.

The 27-year-old is out of contract at Juventus next summer and has again been linked with a move to the Premier League. Ahead of France’s World Cup quarter-final with England, Rabiot revealed his desire to test himself in English football.

“It was a very good experience, even if it didn’t last a year,” he said about his time at Manchester City.

“I really liked the atmosphere around football in England. It’s something quite different from France or even Italy.

“I’ve always said I’d like to play in England one day. It’s the level of the league which attracts me, the way of playing, which I think is well suited to my qualities.”

Rabiot has had a prominent part in France’s run to the last eight, starting each of Les Bleus‘ fixtures with the exception of the dead-rubber defeat against Tunisia in the group stage when Didier Deschamps put out a rotated side.

The midfielder believes he is enjoying the best period of his career ahead of a huge clash with England this weekend.

“I’m going through a very good period football-wise, the best of my career,” Rabiot said.

“I’ve worked a lot on my fitness, which has allowed me to be active for 90 minutes, to not let the rhythm drop. From the moment I stopped asking myself so many questions, I’ve felt much better on the pitch.

“Being free on the pitch and in my head allows to express myself and help the team best.”

Read – World Cup 2022: Ranking the players with most goal involvements so far