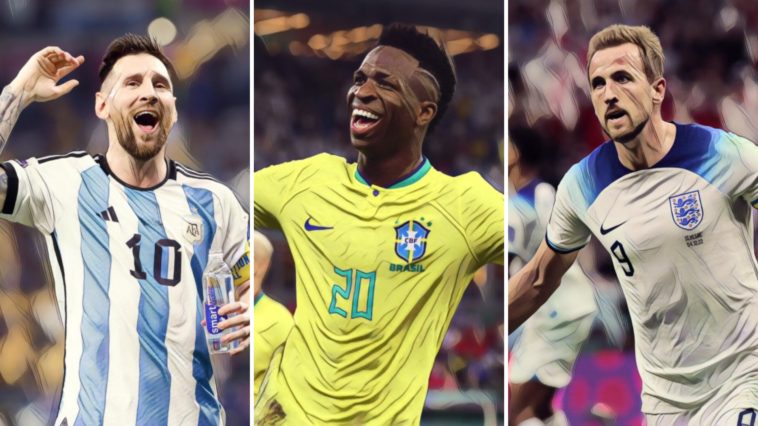 The FIFA World Cup has reached the quarter-final stage and ahead of the last-eight clashes we’ve assessed each side and their chances of being crowned world champions.

Croatia are through to the quarter-finals despite some less that convincing performances to date, progressing from Group F as runners-up to surprise package Morocco. An emphatic win over Canada proved vital, as goalless draws with the Moroccans and Belgium ensured progress ahead of the latter.

Zlatko Dalic overcame Japan on penalties in the last-16, withstanding the vibrancy of the Asian underdogs before holding their nerve in the shootout. Remarkably, it was the sixth time in their last seven knockout ties that the fixture has extended into added time. Of their last five World Cup ties, four have reached the added period and three have been won on penalties.

Dominik Livaković was the hero of the shootout after saving three spot-kicks, becoming just the third man to save three efforts in the same World Cup shootout.

Croatia have won 3 of their last 5 World Cup knockout games on penalties:

Only the Final against France didn’t go to extra-time.🤯 pic.twitter.com/j8AzbMEwAG

The released footage of Luka Modric providing Livaković with a confidence-boosting pep talk earlier in the tournament was poignant after that success, with Modric appearing to be enjoying what is expected to be his last hurrah on this stage.

Croatia have been solid but unspectacular so far, ahead of a quarter-final clash with Brazil. Their task is evidenced by the bookmakers’ perceptions, with Croatia now regarded as the outsiders for the tournament. A lack of pace has not seen the Croatians overly troubled so far, but Brazil will represent a sizeable step up in opposition.

Brazil evoked memories of their World Cup-winning sides during the last-16, as the South Americans produced a fantastic first-half performance to thrash South Korea.

Tite’s side began the tournament as favourites and lived up to that billing with wins against Serbia and Switzerland, progressing as group winners despite defeat to Cameroon – after rotating the side – in their final group fixture.

Against South Korea, Brazil produced one of the displays of Qatar 2022 to date. Four first-half goals, four different scorers, some fluid football, and memorable dance celebrations outlined their credentials as contenders for the crown.

It’s been two decades since their record fifth triumph, but this is a team with the potential to end that wait. An experienced spine, less reliance on Neymar, and a willingness to work from the front are all ingredients that could see Brazil reach another final.

The Netherlands were comfortable winners of a straightforward Group A, after comfortable wins over Senegal and Qatar and a 1-1 draw with Ecuador. The United States were eliminated in the last 16, with Louis van Gaal’s surviving a brief scare with some clinical finishing.

Cody Gakpo has emerged as one of the stars of the tournament so far, with three goals in the group stage. The PSV forward has admirers across Europe and appears to have extended the list of clubs interested in prising him from Eindhoven.

NETHERLANDS VS. ARGENTINA IN THE QUARTERFINALS 🚨🍿 pic.twitter.com/5NqmWB4p2F

The current version of the Oranje is far from vintage, but their is a smattering of top-level talent with Virgil van Dijk the leader of the side. Van Gaal has moved away from the traditional 4-3-3 principles of Dutch football and towards a system with three centre-backs, one that is suited to Nathan Ake and Jurrien Timber in the wider roles and allows Denzel Dumfries the freedom to bomb forward.

Dumfries was impressive at Euro 2020 and excelled in the win over the United States, scoring one and creating two others as the Dutch progressed to the last eight.

Is this Lionel Messi’s tournament?

It can be argued that Messi has never had such a consistent run of performances at the World Cup, with his displays having led Argentina into the knockout rounds.

Argentina’s 36-game unbeaten run was ended in shock fashion during the opening fixture, as Saudi Arabia pulled off one of the World Cup’s greatest upsets. Since then it’s been improvement for Lionel Scaloni’s side, who might just feel that reality check was a blessing in disguise.

Mexico, Poland and Australia have all since been beaten, with Messi scoring three goals in Qatar so far. He was in sparkling form against the latter, producing the kind of moments only he can. His goal was quintessential Messi; a laboured build-up, sharp increase in the tempo, exchange of passes and side-foot of pure precision into the corner.

There are flaws in this team, no doubt, but La Albiceleste will begin as favourites against the Netherlands in the last eight.

Morocco have made history by becoming the first north African team to reach the World Cup quarter-finals and just the fourth from the continent to reach this stage.

200/1 outsiders to win the World Cup before a ball had been kicked, Morocco have since shown solidity and quality to top a group containing Belgium and Croatia in unbeaten fashion.

Walid Regragui’s have conceded just one goal in four fixtures, with Sevilla goalkeeper Yassine Bounou having impressed behind a resolute rearguard. Achraf Hakimi and Hakim Ziyech have provided a sprinkling of stardust, for a team who will no longer be underestimated after eliminating Spain in the previous round.

Portugal will need to succeed where the Spanish failed in breaking down the Moroccan backline, who stuck to their task despite conceding the vast majority of possession. Such was their compact organisation, Spain were restricted to just six shots and only one on target.

Portugal have emerged as potential contenders following a scintillating showing in the last 16. Fernando Santos’ side had progressed from a tricky-looking group stage with a game to spare, but underlined their credentials by thrashing Switzerland 6-1 in the first knockout round.

It was a ruthless performance from the Portuguese, who hit the Swiss for six without the presence of Cristiano Ronaldo. Ronaldo had been left out of the starting side after irking head coach Santos and saw his replacement, Goncalo Ramos, hit a hat-trick on his first international start.

Does Santos now stick with his young guns? It would seem the sensible move, given the success the Portuguese enjoyed against Switzerland. Ramos’ movement caused problems all evening, with the likes of Joao Felix and Bruno Fernandes provided freedom by his stretching of the game.

Ronaldo’s reaction could prove pivotal to Portugal’s chances, with the 37-year-old unlikely to be content with a supporting role. If he can accept a change in status and galvanise the dressing room, Santos’ side – who face outsiders Morocco in the last eight – can challenge.

England are into the last eight and face a mouthwatering quarter-final clash with world champions France this weekend.

It is the first acid test for Gareth Southgate’s side, who have made light work of modest opposition to reach this stage. The Three Lions are the tournament’s leading scorers with 12 goals from four games, having cruised to wins over Iran and Wales in the group stage before a clinical last-16 performance against Senegal.

Jude Bellingham has improved the team that reached the final of Euro 2020, with the midfielder having added a refreshing dynamism to an often maligned midfield. Further forward, Southgate has an embarrassment of riches to choose from. Bukayo Saka, Phil Foden and Marcus Rashford have all impressed in wide roles, with the latter two superb in the win over Senegal.

Harry Kane – who leads the tournament for assists (3) alongside Bruno Fernandes – scored his first goal in the previous round and is now one behind Wayne Rooney’s all-time record. Reservations remain about the quality of England’s back four, as the Three Lions’ prepare to face the World Cup’s top scorer in Kylian Mbappe. Kyle Walker will be tasked with a shut-down role on the tournament’s most dangerous player.

Southgate’s success in leading England to the latter stages of the past two tournaments have come alongside the question mark of favourable draws. Beating France will help change that narrative.

France are looking to become the first team since 1962 to defend the trophy and have impressed in reaching the last eight in Qatar.

Les Bleus boast arguably the World Cup’s finest footballer in Kylian Mbappe, who has scored five goals in just three starts and will be crucial to their chances. Karim Benzema’s enforced absence through injury has seen Olivier Giroud return to the side, with the veteran providing a selfless presence that has helped bring the best from Mbappe and Antoine Griezmann.

Mbappe has now scored nine goals in just 11 appearances in the World Cup, a figure which leaves him level with iconic figures in Lionel Messi, Roberto Baggio and Eusebio.

Elsewhere, Aurélien Tchouaméni has proven a fine replacement for N’Golo Kanté in an anchor role, while Grizemann has sparkled and Ousmane Dembele presents a constant danger.

Excellent in several areas, Didier Deschamps have perhaps the best squad in Qatar man-for-man. Even in the absence of some big names, there is a depth of talent that is more than capable of retaining their status as world champions.