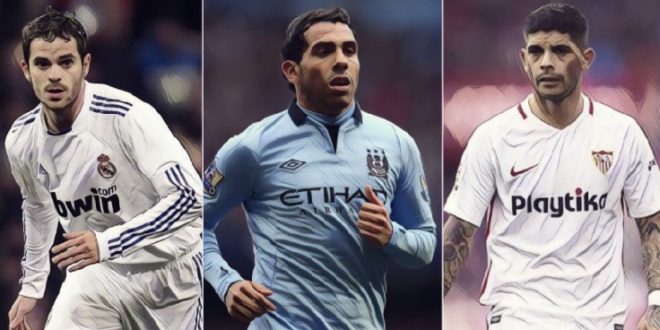 For most of their history, Boca Juniors competed against River Plate with a very different approach, by using the club’s size and wealth to purchase the best players in Argentina, like Diego Maradona and Walter Samuel.

This approach was working for the club, up until the 1980s, where the club’s honours in Argentina and South America began to decline.

While Boca regularly lost to their arch-rivals in the ‘Superclasico’ and failed to compete at the level they had done throughout the club’s history, the Buenos Aires giants took a leaf from their rival’s book and focused on producing quality players from the club’s academy.

Since the 1990s, the club has produced a range of quality players who have moved on to make a significant impact in Europe, which has coincided with the club returning to the top of South American football.

Here’s a look at five of the best Boca Juniors academy products:

The deep-lying playmaker began his career at Boca in 2007, and became one of the first names on the team sheet almost instantly.

After making an early impression in Buenos Aires, Valencia signed the creative midfielder for €20 million after just 11 months in professional football. After an early loan spell at Atletico Madrid, he settled in at the Mestalla and became a key player for Unai Emery’s side.

After Emery was replaced by Mauricio Pellegrino, long term injuries meant Banega was never able to re-establish himself at Valencia. The temperamental midfielder decided to move on in search of regular football and linked up once again with former Arsenal boss Emery at Sevilla.

At Sevilla, Banega was crucial in the La Liga sides famous Europa League triumphs, being named man of the match in the 2015 Europa League final before an outstanding performance against Liverpool in the competition’s 2016 final.

After a brief spell at Inter, Banega returned to Sevilla, where he is still playing regularly, adding to his 65 Argentina caps, and producing moments like these.

Tevez was recognised as a special talent from an early age at Boca, where he made his debut for the senior team at 16 years of age. The tenacious forward became a regular starter in the Copa Libertadores winning side quickly and won South American footballer of the year three years in a row, grabbing the attention of European clubs.

After a brief spell in Brazil at Corinthians, Tevez was involved in the famous ‘third-party transfer’ with West Ham. After finding a way into the Premier League, Sir Alex Ferguson quickly added him to his incredible Champions League winning lineup, where he played alongside Cristiano Ronaldo and Wayne Rooney for two years.

Never one to avoid controversy, Tevez joined United’s Manchester rivals City, where he had another successful spell, winning a Premier League and FA Cup, as well as the club’s player of the year award, despite a five-month hiatus playing golf after refusing to be substituted on in a Champions League game against Bayern Munich.

‘El Apache’ then joined Juventus in 2013, where he was given Allessandro Del Piero’s number 10 shirt. After two seasons dominating Italy with the Bianconeri, the Argentine returned to Boca, where he has made 79 appearances, with a brief period at Shanghai Shenhua in 2017.

‘Scarface’ made his debut for Boca at the beginning of one of the most successful periods in the club’s history in 1999. The current Boca Sporting Director marshalled the centre of defence during Boca’s two League titles, three Copa Libertadores and two Intercontinental Cup triumphs throughout his five seasons at the club.

After impressing at the 2004 Olympics where he won gold with Argentina, Burdisso earned a move to Inter Milan, where despite missing almost the entire first season to tend to his ill daughter in Argentina, he became a key player as a versatile defender that played in every position across the defence during his time in Milan.

After winning four straight Scudettos, Burdisso moved to Roma, where he was a key player until he suffered a knee ligament injury in 2011 representing Argentina, which saw him become a squad player after his recovery.

The Argentine moved to Genoa, spending four seasons playing regularly in North West Italy before finishing his career at Torino in 2018.

Gago was nicknamed “El Pintita”, roughly translating to ‘the little one trying to look good’, due to his skillful playmaking style from deep in midfield. He succeeded in looking good after coming through Boca’s youth academy, making 81 appearances over two years before being signed by Real Madrid.

In the Spanish capital, Gago initially struggled to make an impact and did not play regularly in his first season. The Argentine then began to show his true quality for Los Blancos, becoming a significant member of the 2008 La Liga winning side.

After being named Real Madrid’s Young Player of the Season for three seasons in a row, Jose Mourinho arrived at the Bernabeu and dismissed Gago, sending him on loan to Roma, where he had a decent season, before being sold permanently to Valencia.

Gago soon left the Mestalla to return to Argentina with Vélez Sársfield, before quickly taking the opportunity to return to Boca, where he won the ‘fans most loved player of the season’ five years in a row, cementing his place as a club legend before retiring with 61 caps for his country and an Olympic Gold medal.

Due to his small frame, there were doubts over Nico Gaitán’s potential at Boca, but when he made his debut at 20 years of age, he quickly silenced doubters becoming one of the best players in Argentina over the next two seasons.

Benfica then invested in the young attacking midfielder, where he was the breakout player of the season in his first year in Portugal. He filled the Ángel Di María shaped hole in the squad brilliantly over six seasons, winning multiple Portuguese league and cup titles, as well as Benfica’s player of the year.

Despite being constantly linked with a move to Man United for what seemed like an eternity, Atletico boss Diego Simeone then decided to spend €25 million on his fellow Argentine, where he had a decent first season at the Vicente Calderón, before becoming a bit-part player and being offloaded to Chinese side Dalian Yifang.

After a spell at Chicago Fire, he is seeing out the Autumn of his career at Lille. Gaitan will be remembered by most for the intricate flair he brought to the Estádio Da Luz.

Almost certainly my third favourite goal of the decade this one – just wonderful. Nico Gaitan at the centre of it all: