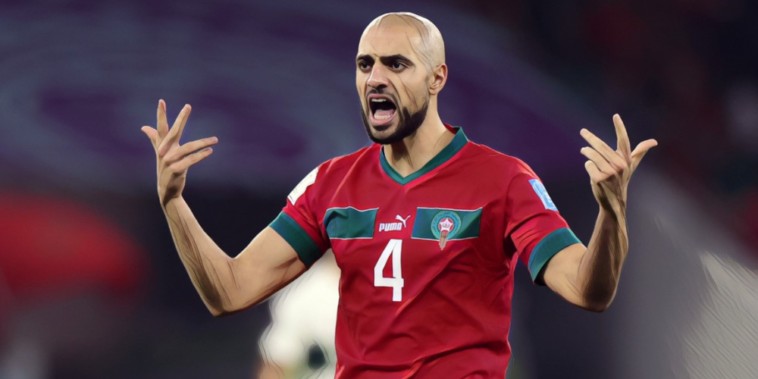 There’s less than three weeks until the January transfer window opens for business, with memories of World Cup performances set to be fresh after a winter tournament in Qatar.

It’s often called the biggest shop window in football and the 2022 edition has been no different. Several stars have shone at the World Cup, with each increasing both their value and list of suitors.

Ahead of the January window, we’ve looked at five World Cup stars who could move this winter.

Sofyan Amrabat has turned heads with his performances for surprise semi-finalists Morocco, with the midfielder the heartbeat of the first African side to reach the World Cup’s final four.

Tottenham considered a move for the Fiorentina star last winter and Antonio Conte is understood to be a big admirer of Amrabat, though Spurs instead moved to sign Rodrigo Bentancur from Juventus.

Fiorentina will want to keep the Dutch-born midfielder until the end of the season, but Amrabat has entered the final 18 months of his deal in Florence and now could be an ideal time to cash-in while his stock is at its highest.

Liverpool, Spurs, Manchester United and Barcelona have all been linked with the 26-year-old, who has received plaudits for the intensity of his work-rate in the Moroccan midfield. His protection of the backline has been crucial to Moroccos’ defensive record, which has seen the Atlas Lions concede just once in five games to date.

“All of Florence is enjoying his qualities, especially after this first part of the season,” the player’s agent told Radio Sportiva this month.

“Of course we like calls (from interested sides), but we have a lot of respect for the choices they are making in the club.

“The player still has a long contract in Florence, with an option to extend it further. I do not deny that the calls are coming in, but we are on very good terms with the management.”

Enzo Fernandez has had a meteoric rise in recent months. The midfielder only made his senior debut for Argentina in September, but this weekend is expected to start the World Cup final in Qatar.

Fernandez made an impressive breakthrough as River Plate won the Argentine Primera División in 2021, form which earned him an €18m move to Benfica last summer. Less than six month later, he is being linked with another transfer and for a significantly greater price.

The 21-year-old began the tournament as a substitute for La Albiceleste, but came off the bench to score a stunning goal in the 2-0 win over Mexico that got Argentina’s campaign up and running. He became the second youngest player ever – behind Lionel Messi – to score a World Cup goal for Argentina and has since been a fixture in the nation’s run to the final.

Comfortable in a number of midfield roles, Fernandez sets the tempo with his progressive passing range and was described as a ‘spectacular player’ by Messi earlier in the tournament. Alongside fellow River Plate product Julian Alvarez, he has had an integral role in bringing the best from Messi and leading Argentina to Sunday’s decider.

Europe’s top clubs are understood to be considering an approach, with Liverpool reported this week to have agreed a pre-agreement with Benfica as Jurgen Klopp looks to overhaul his engine room. Benfica are unbeaten in all competitions this season and will be reluctant to lose Fernandez in January, but a mega offer could tempt the Portuguese side.

Joao Felix has been backed to leave Atletico Madrid this winter with the forward having endured a difficult period in the Spanish capital.

Felix has struggled to live up to expectation since his club-record £113m move to Atletico in 2019, with the pragmatic approach of manager Diego Simeone having proven a poor fit for a forward full of flair.

The 23-year-old provided a reminder of his talents during Portugal’s World Cup campaign in Qatar, scoring once and providing two assists in four appearances. There were glimpses of the fun-loving football that Felix can bring at his best, drifting into dangerous pockets of space between opposition lines. Technically gifted with explosive acceleration and adhesive control, Felix could prove a perfect stylistic match for teams willing to provide greater freedom to those in the final third.

João Felix, prepared to leave Atletico Madrid in 2023. He’s open to a new experience and so there are concrete chances to make the move in January. 🚨🇵🇹 #transfers

Atletico try to ask more than €100m for João. Mendes, discussing with many clubs.

Paris Saint-Germain, Manchester United and Arsenal have all been linked, with the latter duo in the market for attacking additions this winter. Cristiano Ronaldo’s exit from United has left Erik ten Hag in search of fresh impetus in the final third, while Arsenal are looking to cover the absence of the injured Gabriel Jesus.

An initial loan deal could suit all parties, as Felix looks to kick-start his stuttering club career. The promise and potential of the Portugal international will attract a sizeable list of suitors.

Dominik Livakovic made headlines during Croatia’s run to the semi-finals, with the goalkeeper the hero of knockout round wins over Japan and Brazil.

He saved three out of four penalties as Croatia edged past the former in a shootout, before an outstanding display of of goalkeeping took Brazil to penalties in the last eight. Livakovic’s 11 saves against Brazil are the most a goalkeeper has recorded in a single fixture in Qatar, while he made another crucial contribution in the shootout to save from Rodrygo and send Croatia through.

Dominik Livakovic made 11 saves against Brazil, the most saves made by any Goalkeeper in a single match at this World Cup.

No goalkeeper has made more saves than Livakovic at the 2022 World Cup and Bayern Munich have been linked with a move for the 27-year-old, after Manuel Neuer was ruled out for the rest of the season after breaking his leg in a skiing accident.

The Dinamo Zagreb goalkeeper has been named in the Croatian top division’s Team of the Year in six straight seasons and could now be open to testing himself in one of Europe’s top leagues after his heroics on the world stage.

Morocco have been the surprise package of the tournament, becoming the first African team to reach a World Cup semi-final.

The run of the Atlas Lions has been remarkable, taking the scalps of Belgium, Spain and Portugal on route to the last four. An insatiable work-ethic and resolute defence have been behind Morocco’s success, with only Canada having breached their backline in five fixtures in Qatar.

The defence has been protected by a midfield full of relentless running, with Azzedine Ounahi having excelled alongside the aforementioned Amrabat in one of the tournament’s most impressive engine rooms.

Spain manager Luis Enrique was among those to lavish praise on Ounahi, following his performance in Morocco’s upset of La Roja.

“Madre mía, Where did this kid come from? I’m sorry, I can’t remember his name. He can really play. He surprised me.”

It is unlikely Enrique will forget the name of the 22-year-old now, who has been a revelation in Qatar. Morocco have a smattering of top-level talent in the likes of Achraf Hakimi, Hakim Ziyech and Youssef En-Nesyri, but it is Ounahi who is now on the radar of Europe’s top clubs.

Just 18 months ago the midfielder was playing in France’s third tier, while he currently plays his club football at Angers – the side sat bottom of Ligue 1 at present.

It appears unlikely he will remain in the lower echelons of France’s top tier for long, with Barcelona reportedly among the clubs considering a move for a midfielder who has combined elegance with industry in Qatar.