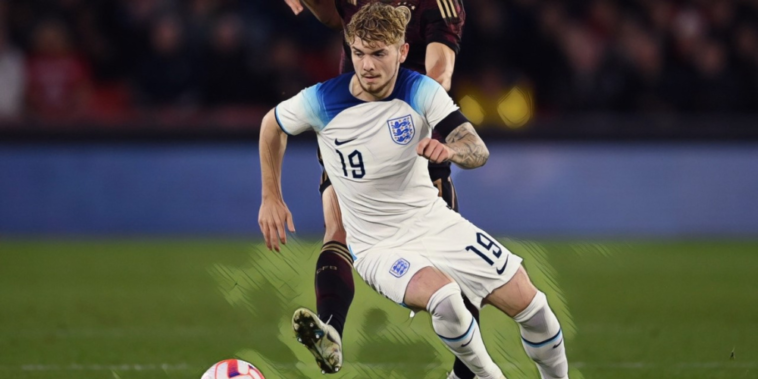 It was a disappointment for Gareth Southgate’s side after the progress of recent tournaments and attentions will soon turn the European Championship set to take place in 18 months time.

Much of the current squad will remain a part of England’s plans for that tournament should qualification be assured, but could new talent emerge to challenge the established names for a place in the squad?

Here are five uncapped players who could push for a place at Euro 2024.

Harvey Elliott has been backed as a future England international ever since he became the Premier League’s youngest ever player, at that time, when making his debut for Fulham as a teenager.

Elliott moved to Liverpool in 2019 and has continued his development under the watchful eye of Jurgen Klopp. An excellent season on loan at Blackburn Rovers accelerated his progress during the 2020/21 season, before he broke into the Liverpool side the following campaign.

A serious ankle injury derailed his season, but Elliott has since returned to the fold. This season the teenager has made 22 appearances in all competitions, starting 14 fixtures across the club’s Premier League and Champions League campaigns.

That pass from Salah though 🤌

He has three goals and an assist, with Elliott impressing as a link between the midfield and front three. He has developed an encouraging understanding with Mohamed Salah in the right channel, where his positional intelligence and confidence in possession has been notable.

Elliott remains a distance down a long list of creatives in England contention, but has the potential to break into the plans of the national side. He has featured from u-15 to u-21 level for England and has 18 months to continue his development ahead of the European Championship.

The oldest name on this list and a player who was unfortunate to miss out on the 2022 World Cup. Ivan Toney was called up to the England squad for the first time during September’s international break, but failed to make his debut during Nations League games against Germany and Italy.

Despite his prolific form at club level for Brentford, he was overlooked for the World Cup with Callum Wilson and Marcus Rashford selected to join Harry Kane as centre-forward options.

Just two players – Erling Haaland and Kane – have scored more Premier League goals this season than Toney, who has netted 22 goals in just 46 starts since Brentford’s promotion to the top division.

Brentford expose Man City on the counter attack as Ivan Toney bags a brace to nick a 2-1 lead with 2 minutes left on the clock!! 🤩#EPL pic.twitter.com/TS4ChhC6J9

Kane will remain England’s first choice at the European Championship, but there is an opening to join the Three Lions’ captain with a lack of credible contenders emerging at centre-forward.

A transfer from Brentford could boost his chances of England involvement and he has been linked with a move this winter. Arsenal, Manchester United and Chelsea have been named as admirers and are all expected to enter the market for forward additions in January.

Steven Gerrard backed Jacob Ramsey for an England call-up earlier this year, outlining his belief that the Aston Villa midfielder had the talent to step up to international level.

“I know the level of the England players, I’ve been around it, and have enough experience to know it’s only a matter of time but let’s all be sensible and keep calm about it,” the former Villa boss said.

“It won’t be long before the whole country is watching him I’m sure. He is right up there let me tell you.”

Steven Gerrard: "I know the level of England players and @JacobRamsey28 is right up there, let me tell you." ⭐ pic.twitter.com/jcOLZmaOQz

He scored six league goals last season and broke into the England u-21 side, for who he has since scored twice in nine appearances. There have been flashes of brilliance from Ramsey, who has impressed as a dynamic and marauding midfielder for Villa. His bursts forward were a feature of Villa’s football last season and he will want to build on that campaign to challenge for the senior England side.

Central midfield is another area where opportunities could arise for emerging names in the coming months, with Jordan Henderson set to be 34 by the time the European Championship arrives.

Levi Colwill made headlines last season after an impressive first season of senior football, with the Chelsea teenager outstanding during Huddersfield’s run to the Championship play-off final.

The 19-year-old had been backed to break into the Chelsea team this season, but instead headed out on another loan deal after being used as a makeweight in Marc Cucurella’s move from Brighton to Stamford Bridge.

The move hasn’t gone completely to plan for Colwill, who has made just one start in the Premier League so far this season. He will hope for increased minutes over the second half of the campaign, with the defender viewed as one of the most exciting talents to have emerged from Chelsea’s conveyor belt of academy prospects.

Left-footed and comfortable on the ball at centre-back, he has all the attributes to step up to international level as he matures. Harry Maguire’s decline at club level could open up an opportunity, as Colwill looks to overhaul fellow Chelsea graduates Fikayo Tomori and Marc Guehi for a place in England’s plans.

Euro 2024 might come too soon for Colwill, unless he can secure a regular role at Premier League level. The next World Cup will be firmly on his radar however, if he can fulfil his clear potential.

Eberechi Eze has been name-checked by Gareth Southgate in recent squad announcements, with the Crystal Palace winger close to selection for both Euro 2020 and the 2022 World Cup, having made the preliminary squad on each occasion.

He would arguably have won a first cap had it not been for a serious Achilles injury sustained in May 2021, one which ruled the star out for six months. Now back to full fitness, he will be keen to push for a place in England’s plans post-Qatar.

“That experience of representing your country at a major tournament is something everyone wants to go through. It’s something I’m working towards. I want to perform and play at the big tournaments.”

Eze has an x-factor that will make him attractive to the England set-up, with his game built on an expressive confidence and ability to glide past challenges. There’s no shortage of candidates for the creative roles in this England squad, but an improvement in his tangible output around goal would put him firmly in contention. Should he manage that, it would come as a surprise if Eze wasn’t given an audition across the next 18 months.