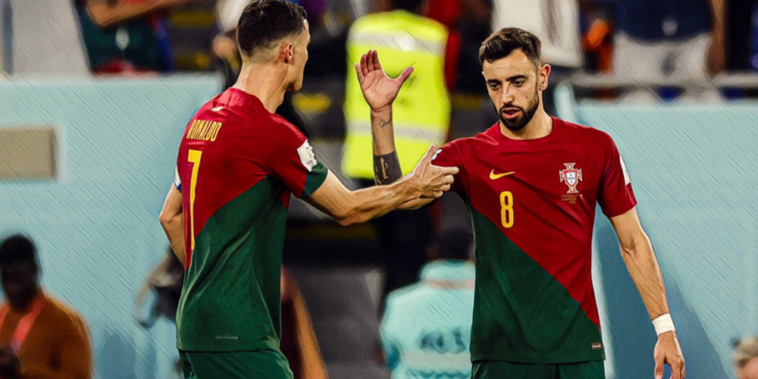 Each of the 32 teams in Qatar have now played in what has been a whirlwind start to the 2022 FIFA World Cup.

The tournament is well represented by Premier League players, with a huge 133 having been included in their national squads for the World Cup.

We’ve picked out five Premier League names who have impressed so far.

Richarlison might lack the star name of past Brazil number nines, but the Spurs striker demonstrated just why he is so important for the Selecao against Serbia.

It’s now nine goals in just seven appearances for Brazil this calendar year, after Richarlison marked his World Cup debut with both goals in a 2-0 win for the tournament favourites.

The 25-year-old has failed to score in ten league appearance since signing for Spurs during the summer, but has been in blistering form for the national side and ensured Tite’s team began their campaign with a win against the stubborn Serbians.

His first goal was a poacher’s finish as he turned home a rebound from close range, before adding a second that will be difficult to beat for the Goal of the Tournament. After a first touch bounced into the air, Richarlison improvised to score a spectacular overhead kick.

It was a moment of magic from the forward, who repaid the trust shown in him to lead the line for an expectant Brazil in Qatar.

Bukayo Saka’s last kick for England at a major tournament had been the decisive penalty miss as the Three Lions lost the Euro 2020 final to Italy at Wembley.

The aftermath of that defeat was difficult to deal with for Saka, who – alongside Marcus Rashford and Jadon Sancho – found himself a target for vile racist abuse on social media.

Fast forward to the World Cup and Saka exorcised some of those demons with a scintillating performance as Gareth Southgate’s side thrashed Iran in their World Cup opener. Saka was a menacing threat all afternoon for England, with his dribbling and movement causing headaches for the Iranian defence.

What a dream World Cup debut it was for Bukayo Saka 🏴󠁧󠁢󠁥󠁮󠁧󠁿 pic.twitter.com/ODIPUGQXWJ

If there were doubts over his status as an automatic starter ahead of Qatar, there can be none now. His first World Cup appearance was marked with a thumping volleyed finish, before he added a second goal after half-time with a jinked run into the penalty area and composed finish.

Portugal’s tournament began with an entertaining 3-2 win over Ghana, in which Cristiano Ronaldo opened the scoring to become the first man to score at five World Cups.

It was Ronaldo’s now ex-Manchester United teammate who came to the fore in the second period however, as Bruno Fernandes proved decisive after a cagey opening half. The midfielder worked tirelessly for Portugal in midfield and showcased his class in possession to record two assists.

The timing and weight of Fernandes’ passes were perfect as he teed up goals for Joao Felix and Rafael Leao, as the midfielder continued his excellent recent form for the national side.

After initially struggling to replicate his club output at international level, Fernandes has found his groove in recent games. It’s now three goals and three assists in his last four appearances for Portugal.

England’s 6-2 win over Iran had strong performances across the pitch, with no shortage of positives for Gareth Southgate and his staff.

Among them was a superb showing from Luke Shaw, who appears to have rediscovered his best form at just the right time. The left-back had a slow start at Manchester United this season, but improvement in recent club games appears to have transferred over to the national side.

Shaw was an influential presence as England recorded an emphatic win, creating the first goal with a wonderful clipped cross into Jude Bellingham. He has now provided five goal involvements in his last five tournament appearances for the Three Lions and was involved in the second goal during a performance in which his technique and threat were evident.

With Ben Chilwell ruled out of the tournament, there was a lack of left-back options to provide genuine competition for Shaw. Southgate will be delighted that his first-choice looks in fine fettle, with England beginning in positive fashion in Qatar.

Casemiro was in fine form to shackle the threat of Sergej Milinkovic-Savic, as Brazil began their campaign with a 2-0 win over Serbia.

The Manchester United midfielder was combative in his defensive work as he regained possession on seven occasions, while Brazil’s midfield anchor was also afforded the chance to demonstrate his more creative side to his game.

He made 11 passes into the final third and showcased his impressive range of passing, including a wonderful early ball to release Neymar.

Casemiro's game by numbers vs. Serbia:

Someone put this guy out. 🧯#FIFAWorldCup pic.twitter.com/2quiP0wc97

He also twice came close to scoring, with one first-time effort from the edge of the area coming back off the crossbar. Brazil’s spine is as strong as any in the tournament and Casemiro is a key part of that.