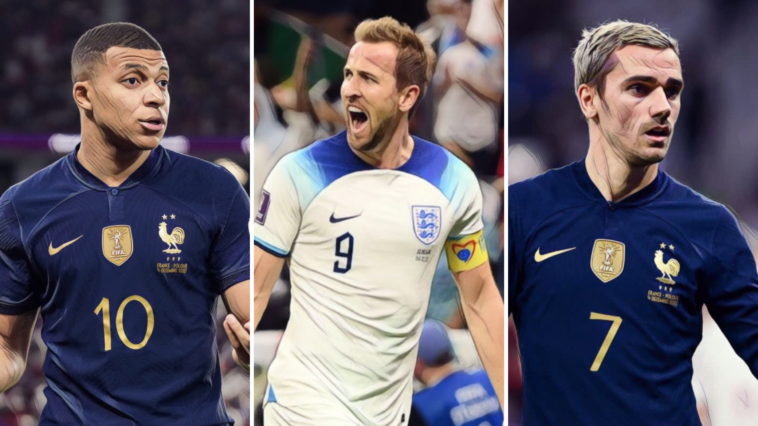 England face France in a mouthwatering World Cup quarter-final clash this weekend, with the world champions offering a huge test to the credentials of Gareth Southgate’s side.

Both sides will be familiar with each others strengths and weaknesses, in what promises to be an even match-up between two nations with ambitions of being crowned champions in Qatar.

Ahead of the clash, we’ve attempted to created a combined XI from two start-studded squads.

Jordan Pickford will win his 50th cap for England during Saturday’s quarter-final showdown, with the goalkeeper having been a reliable presence for the Three Lions under Gareth Southgate.

There have been bigger name goalkeepers who have struggled with the expectation that comes with performing for England, but Pickford has often raised his levels with the national side. After a consistent period in a struggling Everton side, he has taken that form into the World Cup and leads the tournament for clean sheets.

Most clean sheets at this #FIFAWorldCup… this guy right here 🏴󠁧󠁢󠁥󠁮󠁧󠁿⛔️ pic.twitter.com/bf6Olbnkca

Kyle Walker’s return to fitness is a major boost for England, with the defender’s battle with Kylian Mbappe viewed as a potentially decisive duel this weekend.

Among the most experienced members of the England squad, Walker has been the first-choice right-back during Gareth Southgate’s reign despite the competition for places from names such as Reece James, Kieran Trippier and Trent Alexander-Arnold.

Walker’s explosive speed has often been a part of England’s game-plan defensively and will be put to the test this weekend in Al Khor.

Is John Stones one of the most underrated centre-backs in Europe?

The 28-year-old is a consistent performer for club and country and has quietly enjoyed a fine World Cup to date, leading the tournament for ball-carrying distance and pass completion percentage.

4 – The four players to have covered the most metres with their ball carries so far at the 2022 World Cup all play for @ManCity:

England’s build up begins with Stones, whose comfortability in possession is a huge asset at this level.

Already a winner of four Premier League titles at Manchester City, he will be hoping to add a major international tournament to his résumé after near misses in recent competitions.

France boast an admirable depth of talent in all areas of the pitch, but centre-back is a position of real strength for the world champions.

Ibrahima Konate and William Saliba are two of the best young central defenders in the Premier League, but Raphael Varane remains the leader of the French backline.

One of the world’s best in his position, Varane brings the sort of elegance to the defensive game that has seen him widely labelled a Rolls Royce defender. After four Champions League successes at Real Madrid, a second World Cup triumph would increase Varane’s status as one of the most decorated defenders in the history of the game.

Rolls Royce at the back. 🤩 pic.twitter.com/IqKHJH92R8

Luke Shaw has again raised his level for a major tournament with England, but we’ve selected Theo Hernandez at left-back.

Hernandez’s chance has arguably only come as a result of an injury to older brother, Lucas, but he has continued his excellent start to his France career in Qatar. It’s now a goal and six assists in just ten appearances for Les Bleus, with Hernandez showcasing the attacking adventure which has seen him named in the Serie A Team of the Year in three consecutive campaigns.

The AC Milan full-back is a marauding presence when given a licence to join the attack and his chance creation has been a feature of France’s tournament.

Eyebrows were raised when Real Madrid sanctioned a deal worth up to €100m for Aurelien Tchouameni during the summer, but the midfielder has soon shown the reason for his huge fee.

Impressive at Monaco, he has taken game up a level since making the switch to Spain and has proven the perfect replacement for N’Golo Kante in the France squad this winter. He leads the tournament for interceptions (8) alongside Declan Rice and Ró-Ró, while he marginally betters Rice for pass completion (95%).

Crucially, Tchouameni has been proactive with his passing at the World Cup so far, with just two players – Spain’s Rodri and Pedri – making more passes into the final third. His battle with England’s midfield three will go some way to deciding Saturday’s showdown.

Jude Bellingham has emerged as one of the stars of the tournament so far, with his price-tag ever increasing following a run of fine performances in Qatar.

The teenager was already a target for Europe’s top clubs, but interest is expected to accelerate following his dynamic displays in Gareth Southgate’s engine room. Arguably England’s most influential player to date, his box-to-box drive has been at the heart of the Three Lions’ best performances at the World Cup.

Just five players have made more tackles than the 19-year-old, while only Kylian Mbappe has produced more goal-creating actions.

Perhaps the greatest threat for a wide-man is unpredictability and there are few who can bamboozle better than Ousmane Dembele.

After a wretched period with injuries he appears to have found his rhythm, leading La Liga for assists last season (13) despite making just 15 starts. This season he has nine goal contributions in 11 starts for Barcelona and has had an influential role in France’s World Cup campaign to date.

🎯 @dembouz now has 2 assists in his last 4 games, one more than in his previous 28 appearances for France 💥 #FiersdetreBleus pic.twitter.com/QOFAQuxfp1

There’s arguably no player in world football who can boast his two-footedness, with even Dembele unsure of his strongest side.

Full of invention, pace and and ability to go either side, the 25-year-old will represent huge danger for England this weekend.

Is this the tournament that cements Kylian Mbappe’s status as the best in the world?

Mbappe has long been discussed as the heir to the throne that Lionel Messi and Cristiano Ronaldo have competed for across the past decade, but on current form it is difficult to argue that he is not already sat upon it. The 23-year-old has been electric for France in Qatar, scoring five goals to lead the race for the Golden Boot.

Operating from a position on the left, he has caused nightmares for opposition full-backs with his sharp footwork and scintillating speed. It’s now nine goals in 11 appearances at the World Cup for Mbappe, as many as the career totals of Messi, Eusebio and Roberto Baggio.

He was named as the Best Young Player in Russia four years ago as France were crowned world champions. A second successive triumph is within reach and back-to-back World Cup successes would likely be followed with the Golden Ball and, perhaps, a Ballon d’Or.

Antoine Griezmann has so often delivered for France at major tournaments. Winner of the Golden Boot at Euro 2016, he followed that campaign with a starring role in Les Bleus triumph on the world stage two summers later.

Now in a creative role behind the frontline, he has excelled to be one of the players of the 2022 World Cup to date. Griezmann has created more chances than any other player at the finals, with his 15 moving him past Lionel Messi.

15 – Chances created with France over a single World Cup in the 21st century:

He also leads the tournament for key passes and expected assists, while not neglecting his defensive duties. Only one player in the England squad – Jude Bellingham – has made more tackles than Griezmann in Qatar. A crucial cog for Les Bleus.

Harry Kane leads the line in our combined side, with the England captain closing in on the Three Lions’ all-time goals record.

He’s now just one behind Wayne Rooney after scoring his 52nd international goal in the last-16 win over Senegal. That goal also saw Kane become England’s record goalscorer at major tournaments. moving past Gary Lineker’s landmark with the 11th of his career.

Add in his passing range and Kane is a complete number nine. He leads the World Cup for assists (3), alongside Portugal’s Bruno Fernandes.