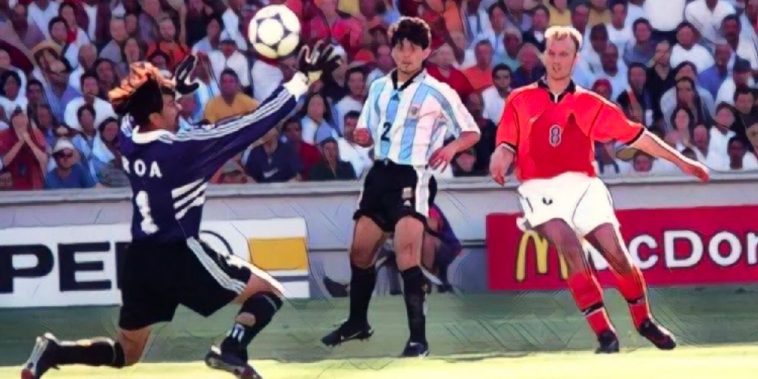 The Netherlands and Argentina go head-to-head in the World Cup quarter-finals this evening, a fixture that has produced some classic contests in past tournaments.

There’s been some unforgettable World Cup meetings between two famous footballing nations and we’ve decided to remember each of those games.

Total Football introduced itself to the World Cup stage in 1974, as the Netherlands produced a perfect performance to thrash Argentina in the opening fixture of Group A.

It was a first World Cup appearance in 36 years for the Dutch, but one which saw their iconic side dismantle their South American opponents in Gelsenkirchen.

Johan Cruyff was the architect of the win and scored twice for the Oranje, with further goals from Ruud Krol and Johnny Rep ensuring an emphatic and one-sided scoreline in favour of the Dutch.

Cruyff opened the scoring after bringing down Johan Neeskens’ pass before rounding the goalkeeper. Krol then doubled the lead, firing through a mass of bodies from the edge of the area. Rep headed home a third at the far post, before Cruyff completed the rout with an audacious volley from an acute angle.

It was fantastic free-flowing football from the Rinus Michels’ wonderful side, who sent out an early statement with their thrashing of a proud footballing nation.

Four years later the teams met once again, though this time in the World Cup final. The Netherlands had finished as runners-up to West Germany in 1974, but returned to the final for a second successive tournament.

The Dutch had considered withdrawing from the finals, such was the controversy surrounding host nation, Argentina. It was a tournament played among the backdrop of human rights issues, match-fixing allegations and political tensions, following a military coup in Argentina in 1976.

Johan Cruyff – winner of the Golden Ball four years earlier – refused to participate, though it was later revealed his decision was down to an attempted kidnapping involving his family in Barcelona.

It's exactly 41 years since 🇦🇷 @Argentina lifted their first #WorldCup! 🏆

The likes of Daniel Passarella and Mario Kempes led them to glory on home soil #onthisday. pic.twitter.com/P0lhlDgVsn

Argentina reached the final to face the Netherlands after beating Peru 6-0 in the second stage – having needed a four or more goal margin to progress and eliminate Brazil in the process.

In the final it was the host nation who triumphed, condemning the Dutch to a second straight World Cup final defeat. Mario Kempes opened the scoring for the South Americans, but an equaliser from Dirk Nanninga forced extra time.

Kempes scored his second to put Argentina back into the lead, before Daniel Bertoni scored the third to crown La Albiceleste World champions for the first time.

The next meeting between the teams at the World Cup came two decades later and proved another classic contest on the world stage.

Their quarter-final at France ’98 proved an eventful encounter, one that contained late drama and truly glorious goals. The Dutch – wearing those nostalgic burnt orange shirts – opened the scoring inside 12 minutes.

Then came the red cards. Arthur Numan was first to be sent off, after the Dutch full-back’s late lunge on Diego Simeone. The numbers were levelled up minutes later though, as Ariel Ortega was also sent for an early bath for a head-butt on Van der Sar. Not happy with the goalkeeper’s complaints at his dive in the penalty area, the midfield thrust his head upwards to receive a second booking in double-quick time.

Dennis Bergkamp's knack for making goalscoring look easy was on full display when he fired @OnsOranje into the #WorldCup semi-finals #onthisday in 1998 🇳🇱 pic.twitter.com/akVInsbTT7

Extra-time appeared to be looming, before Bergkamp decided the game with a piece of pure genius. It is a goal that has been eulogised about on countless occasions and needs little more description here.

You know the one. De Boer’s long raking pass, a first-touch sent from the heavens, and a chop inside to score one of the World Cup’s greatest-ever goals.

If the aforementioned encounters can be filed under World Cup classics, this one is confined to the forgotten fixtures folder.

The teams renewed rivalries in the group stage of the 2006 tournament in Germany, with each already assured of progress after taking maximum points from their opening two fixtures.

Both sides rotated their options and the result was a drab encounter that resulted in a goalless draw. Argentina came closest to breaking the deadlock when Juan Roman Riquelmes’ free-kick was deflected onto his own post by Dutch defender Khalid Boulahrouz.

Argentina progressed as group winners and reached the quarter-finals, while the Dutch were eliminated in the first knockout round after an ill-tempered clash with Portugal that saw a record four red cards and 16 yellows. Fittingly, it became known as The Battle of Nuremberg.

Argentina earned their place in the World Cup final after beating the Netherlands on penalties in 2014.

The tense semi-final had been in contrast to the other last four fixture of the tournament, which saw Germany thrash host nation Brazil 7-1 in a stunning result.

Neither side was able to break the deadlock across the 120 minutes of forgettable and nervous action, with the Dutch not registering their first shot on target until extra time.

Sergio Romero was the hero of the shootout for Argentina, as he made penalty saves from Ron Vlaar and Wesley Sneijder to book a World Cup final meeting with Germany at the Maracana.