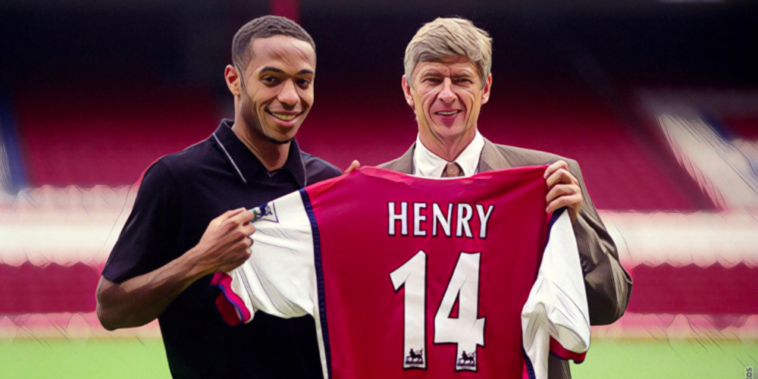 Premier League clubs have regularly brought in exciting imports from Italian football, with a number of names having made a huge impact since swapping Serie A for England’s top tier.

Should those deals be completed, the two clubs will hope their headline signings can follow in the footsteps of these past Italian imports.

Here are five of the best Serie A to Premier League transfers.

Arsenal broke their transfer record to sign Dennis Bergkamp from Inter Milan in 1995, with the forward having endured a difficult time in Italian football.

Bergkamp arrived under the guidance of Bruce Rioch, before starring following Arsene Wenger’s appointment as manager in north London.

The Dutch forward was an excellent technician and arguably the catalyst for the Gunners change, becoming the centrepiece of a side who produced some of the best football of the Premier League area.

He was named as the PFA Players’ Player of the Year and FWA Footballer of the Year after inspiring Arsenal to Premier League and FA Cup success in 1997/98, before winning a second domestic double in 2001/02.

Two seasons later, he formed part of the side that completed an entire Premier League campaign without defeat to win the title, setting an eventual English top-flight record of 49 games unbeaten.

He made 424 appearances across more than a decade at Arsenal, a career with the club that included glorious goals, trophy success, and countless magic moments.

Gianfranco Zola arrived in the Premier League at Chelsea in November 1996, with the west Londoners securing the signing of the forward from Parma.

Zola, at 30, had enjoyed success in his homeland before headlining a Chelsea side with an increasingly continental flavour during the late nineties.

The rest, as they say, is history… pic.twitter.com/CUQdnyOg43

His impact was immediate as he won the FWA Footballer of the Year in his debut season, becoming the first Chelsea player to win the award and the only player to have done so having arrived into the Premier League mid-season.

Zola spent seven seasons with the Blues, a time that was littered with moments of genius from the diminutive magician, who won four major trophies and scored a series of spectacular goals.

He departed in 2003 having scored 80 goals in 311 appearances and was voted as the club’s greatest ever player that summer, receiving more than half of the votes in a poll on club’s official website.

Patrick Vieira arrived at Arsenal as a gangly and unproven midfielder from AC Milan, before stamping an authoritative mark on the Gunners’ history.

Vieira was the heartbeat of the side that won three Premier League titles under Arsene Wenger, including two domestic doubles as the north Londoners enjoyed a golden period.

🇫🇷©🏆@CPFC manager Patrick Vieira introduced himself to the #PL with @Arsenal, #OnThisDay 25 years ago… pic.twitter.com/CCuCceSZn3

He succeeded Tony Adams as the north London club’s captain and led the side to their famed ‘Invincibles’ triumph in 2003/04, scoring in the final day win over Leicester that saw Arsenal become the first team since Preston North End in 1888/89 to complete an entire English top-flight campaign unbeaten.

Vieira at his best was the driving force of Arsenal’s best teams, a ferocious competitor and one of the Premier League’s finest midfielders.

Thierry Henry’s transformation saw him become arguably the Premier League’s best ever import, arriving with unfulfilled promise before turning into the greatest goalscorer in Arsenal’s history.

Henry signed for Arsenal from Juventus as a winger, having struggled to make an impact in Turin. Arsene Wenger was convinced however, believing his latest recruit could excel in a central role.

Wenger’s view was proved right in spectacular fashion, as Henry set about breaking the Gunners’ goal record. He scored 228 goals in all competitions for the club, winning a record four Premier League Golden Boots in the process.

Henry at his best was enthralling viewing, possessing electric speed that often made him unplayable. He won two League titles, three FA Cups, and five Player of the Year awards – earning the PFA accolade twice and the FWA award on three occasions.

The embodiment of Arsene Wenger’s Arsenal, a statue of the Frenchman fittingly sits outside the Emirate Stadium.

Liverpool provided Mohamed Salah with a second shot at the Premier League in 2017, spending a then-club record £36.9 to sign the Egyptian from Roma.

Salah had struggled during a previous spell at Chelsea, but returned in sensational fashion after a record-breaking debut campaign at Anfield.

The winger scored 32 goals to win the Premier League’s Golden Boot in 2017/18, setting a new record for the most Premier League goals scored in a 38-game season.

The goals have continued to arrive at a rapid rate since, with Salah having scored 156 goals in 254 appearances in all competitions for Liverpool, becoming the highest-scoring African player in Premier League history in the process.

Team and individual honours have racked up, including a clean sweep of major trophies, winning the Champions League, Premier League, FA Cup and League Cup with the Reds.