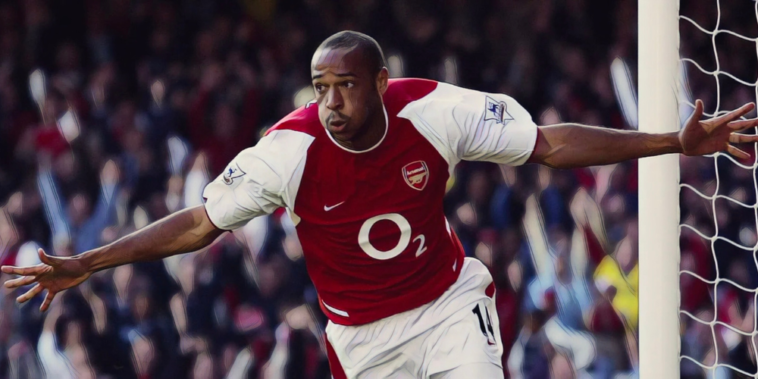 Henry at his best was a new breed of centre-forward, a pioneer for the modern goalscorer as he drifted across the pitch and scored goals in both huge quality and quantity.

Among the defining players of the Premier League era, he left no shortage of magical memories across a stunning eight-year period in north London and in tribute to a Gunners great we’ve decided to celebrate some of his finest moments.

Here are five of the best Thierry Henry goals.

Arsenal vs Manchester United was the most iconic rivalry of the Premier League era, as the two titans shared the league title across eight consecutive campaigns in the late nineties and early 2000s.

Meetings between the duo were fiercely competitive and often packed full of incident, with spirit and skill on show in abundance.

Henry decided a competitive encounter between the sides during the 2000/01 campaign, scoring the game’s only goal in stunning fashion at Highbury.

Henry was still finding his feet as a centre-forward at this stage, though a promising first season with Arsenal and victorious Euro 2000 with France had demonstrated he was more than capable in a central role.

He had, however, failed to score in a month heading into the clash with the Red Devils, before producing the kind of outrageous individual moment that became his trademark.

Despite Denis Irwin in close attention as he received the ball back-to-goal, Henry – all in one fluid movement – attempted something out of the ordinary.

Flicking the ball upwards and to his right, he swivelled and unleashed a dipping volley that left international teammate Fabien Barthez with no chance.

Arsenal began the 2002/03 campaign as defending champions, but were forced to come from two goals down to earn a point at West Ham in this early season encounter at Upton Park.

Joe Cole and Frederic Kanoute had given the Hammers a two-goal lead, before Henry began the fightback with a stunning individual effort.

Receiving Patrick Vieira’s pass between the lines, the forward used the weight on the ball to spin Christian Dailly and head towards goal.

As it bounced invitingly, he cushioned the ball on his thigh before unleashing a thunderous effort which flew into the top corner.

The 2002/03 season was perhaps the campaign in which Henry produced his finest football, winning a PFA Player of the Year and FWA Footballer of the Year double following an outstanding individual season.

Henry scored 24 league goals and added a record-breaking 20 assists, standing head-and-shoulders above the division despite Arsenal missing out on the Premier League title.

His north London derby goal against Spurs was a highlight in an extraordinary campaign, a solo stunner which showcased Henry’s ability to win games almost singlehandedly.

Arsenal secured footballing immortality after winning the Premier League in 2003/04, their unbeaten side becoming known as the ‘Invincibles’.

The Gunners had been the best team in England by some distance, but their season was in danger of unravelling ahead of Liverpool’s visit to Highbury in April 2004.

Arsene Wenger’s team had exited both the FA Cup and Champions League in the proceeding days, while the north Londoners found themselves 2-1 behind at the interval.

At his side’s time of need Henry found another level, ending the game with a stunning hat-trick as Arsenal came from behind to secure a 4-2 win.

His second goal of the game remains one of his finest in an Arsenal shirt, as he made fools of Didi Hamann and Jamie Carragher on his one-man crusade towards the Liverpool goal.

Both were beaten as Henry moved effortlessly through the gears, before he kept his cool to roll home a finish and continue Arsenal’s march towards history.

Henry became Arsenal’s all-time record goalscorer with a double against Sparta Prague in 2005, scoring both goals in a 2-0 win over the Czech side in the Champions League group stage.

The forward had began the game on the bench before being introduced as an early substitute, coming on for the injured Jose Antonio Reyes to write his name into the record books.

His first goal was a quintessential Henry effort, one wrapped in impudence and invention. Collecting Kolo Toure’s long pass with his heel, the Frenchman manoeuvred around the bouncing ball before unleashing an extravagant shot off the outside of his right boot to level Ian Wright’s club record.

He added a second after the break to take the record outright, moving to 186 goals for the Gunners after holding off two defenders on the edge of the area before slotting the ball home to secure the win.