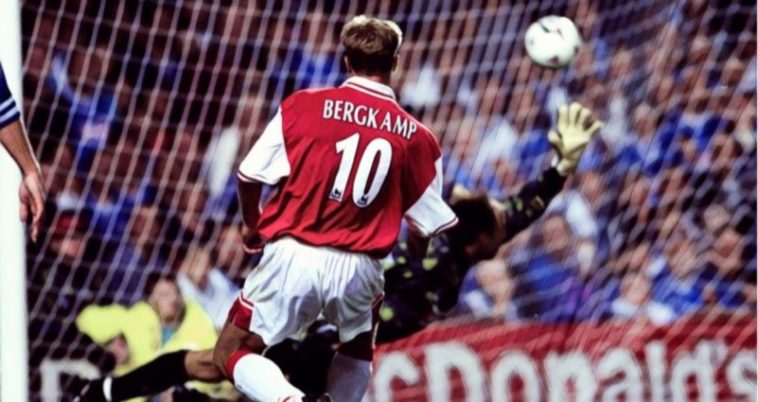 Dennis Bergkamp was simply not cut from the same cloth as most footballers, his career containing an abundance of majestic moments that left the viewer in no doubt they were witness to something special.

The bronze statue of the Dutchman that resides outside the Clock End of Arsenal’s Emirates Stadium is a fitting tribute to his talent, whilst even its imagery – the forward cooly concentrated as the ball falls under his immaculate control – is an apt appreciation of a Gunners great.

Bergkamp’s career in the Premier League proved one impossible to forget, though it was not all plain sailing in the infancy of his time in the red and white of London’s most successful side.

The Dutchman had starred after coming through the hallowed academy system of Ajax, the Dutch side operating a never-ending conveyor belt of talented home-grown footballers.

Bergkamp was amongst their brightest following his emergence in the late eighties, scoring 122 goals across just 237 appearances, before the lure of Serie A – then indisputably the premier competition in world football – proved too difficult to turn down.

His move to Inter Milan failed to work out as hoped however, what had appeared a perfect platform turning into a case of a culture clash as Bergkamp’s guile was somewhat lost in a league famed for its defensive resilience.

An awkward fit in Milan proved glove-like in contrast following a move to the Premier League and Arsenal, with Bergkamp recovering from an initial seven-game drought to grow in influence in north London.

He arrived in the capital under the management of Bruce Rioch, though the coach who had sought his talents had little idea on how to utilise them to their maximum.

That all changed following the arrival of Arsene Wenger, a relative unknown to most in English football.

Wenger’s principles for free-flowing attacking football proved the perfect compliment to Bergkamp’s grace in the final third, with the Frenchman’s first full season in charge freeing the forward from his shackles.

After going goalless in the opening two fixtures of the season, Bergkamp scored twice in a 3-1 win at Southampton, his first a brilliant individual effort as he drove from just inside the Saints half before checking back and finishing with aplomb.

Just four days later Arsenal travelled to Filbert Street to face a Leicester team on the rise, having secured a top-half finish and League Cup success following promotion to the Premier League the previous season.

Martin O’Neill’s side were physically strong and tenacious in their work, a snarling midfield combination of Robbie Savage and Neil Lennon restricting the space Bergkamp often dropped into between defensive lines.

Confidence high from his double that downed Southampton, it took just nine minutes for Arsenal’s number ten to make his mark.

Leicester were caught sleeping as a short corner found its way to Bergkamp stationed just outside the penalty area, the forward taking just one touch to set himself inside and angle towards goal.

Using the hulking frame of an onrushing Emile Heskey as a guide, Bergkamp bent an inch-perfect finish around the teenager that sailed into Kasey Keller’s far corner to open the scoring for the Gunners.

The first of Dennis Bergkamp's three stunning goals in his hat-trick against Leicester ✨#GoalOfTheDay | @Arsenal pic.twitter.com/4GhD2Lgbyk

Arsenal pushed for a second goal but largely found Leicester resilient in their defence, though found a breakthrough just after the hour with Bergkamp the man responsible for doubling the advantage.

Patrick Vieira regained possession deep inside his own half before exchanging passes with Ray Parlour, the latter driving into opposition territory before returning the ball to the long-legged Frenchman galloping forward down the right.

Vieira’s pass inside found Bergkamp, whose first touch takes him beyond the wrong-footed defender and tempts Keller out of his goal in a desperate attempt to spoil at the forward’s feet.

The Dutchman gets to the ball first, prodding a finish that fortuitously cannons off the goalkeeper and loops into the night air before dropping in to hand the north Londoners a two-goal cushion.

An ordinary fixture would peter out into a routine Arsenal win on the road, but the closing stages at Filbert Street ensured this would be an all-time Premier League classic under the lights.

O’Neill, becoming increasingly animated on the touchline, implored his side to push forward and the pressure told as a pair of Arsenal mistakes resulted in a Leicester lifeline.

Steve Bould’s shank into touch needlessly handed possession back to the Foxes, before substitute Garry Parker’s hoisted delivery created confusion as David Seaman – unwittingly blocked by Lee Dixon – failed to claim the cross and allowed Heskey the simplest of finishes into an open goal.

The deficit halved and the Foxes’ tails firmly up, the soundtrack of the closing stages became ever more feverish as the home support rallied their side for one final assault on the Arsenal goal.

The anxious hushed tones changed rapidly to delirium as Matt Elliot scored the most unlikely of equalisers, the defender – still forward following a half-cleared corner – drilling a low deflected strike beyond Seaman.

Late drama, but it was far, far from done.

Arsenal – stung by the conceding of a two-goal lead – rallied once more, some intricate passing resulting in the ball working its way to David Platt, who looked hopefully in the direction of the Gunner’s Dutch dangerman.

Platt’s lofted pass was killed instantly with an adhesive touch from Bergkamp’s right foot, his second lifting the ball inside goalscorer Elliott with his left, the ball not hitting the ground from the moment the initial pass was made.

Taking a moment to steady himself in the ice-cold vein that defined his game, his third touch nestled beyond Keller to complete arguably the greatest hat-trick the Premier League has witnessed.

There was still time for another Leicester equaliser, a total of three goals coming in stoppage time as the two sides played out a pulsating conclusion to a classic contest.

In truth, the result mattered little.

This was the evening when Dennis Bergkamp truly arrived in the Premier League, a footballer who had an incredible ability to drop jaws and widen eyes in amazement.

His feats at Filbert Street formed part of three goals Bergkamp had celebrated at the end of the month, as he finished first, second and third in the Premier League’s Goal of the Month competition, a unique piece of history for his gifted genius.

He finished the 1997/98 campaign with 16 goals and 11 assists from just 28 games played, an inimitable standard with saw him win a PFA Player of the Year and FWA Footballer of the Year double as Arsenal were crowned champions.

There was no shortage of majestic moments during Bergkamp’s captivating career in north London, but 27 August 1997 was the night where his legend enjoyed lift off.