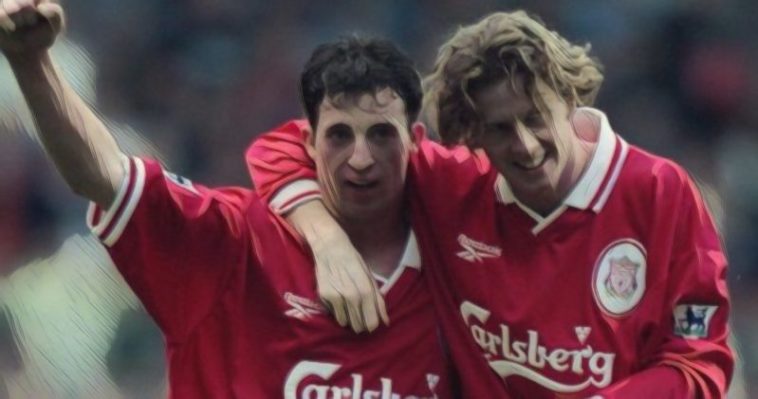 Liverpool face Manchester City this weekend in the latest edition of their increasingly fierce modern rivalry. The two sides are coached by arguably the world’s finest managers in Jurgen Klopp and Pep Guardiola, with both having established their sides amongst the finest in Europe in recent seasons.

Their clash at Anfield could have huge implications on this season’s title race, though the rivalry between the sides is a modern concept with several stars having represented both teams during the Premier League era.

The Toxteth-born forward emerged from the Liverpool academy amid much hype during the early nineties, where he made an immediate impact in the first-team and quickly established himself as a deadly finisher at Premier League level.

Named as PFA Young Player of the Year in back-to-back seasons, Fowler would be nicknamed ‘God’ by Liverpool fans after plundering 171 goals in just 330 appearances during his first spell at Anfield, whilst also helping the club to a memorable treble of cup wins in 2001.

He would join Manchester City via a spell at Leeds in 2002, scoring 28 goals in 92 appearances before making an emotional return to Liverpool under Rafael Benitez three years later. He would net a further 12 goals in Liverpool red before winding down his career with spells at several clubs at home and abroad, retiring as the seventh-highest goalscorer in Premier League history.

Another Liverpool academy graduate who would later move to the blue half of Manchester, McManaman emerged as one of the Premier League’s most exciting wingers during a nine-year spell in the Liverpool first-team, winning both the FA Cup and League Cup, scoring both goals in a 2-1 victory over Bolton Wanderers in the final of the latter.

Possessing natural flair and dribbling ability, McManaman quickly became a regular in the England side, though he opted to leave a transitional Liverpool in search of silverware and joined Real Madrid in 1999, becoming one of English football’s most successful exports in winning two La Liga titles and two Champions Leagues.

Following a four-season spell in Spain he would finish his career at Manchester City, making 44 appearances in two seasons at the club.

Arguably one of Liverpool’s best signings of the Premier League era, Gerard Houllier swooped to sign the German international from Premier League rivals Newcastle after just a single season on Tyneside in 1999.

The midfielder would go on to form part of the spine of the Reds side during a successful period for the club, playing his part in the aforementioned cup treble-winning season of 2001 before helping Liverpool lift the Champions League and further League and FA Cup trophies.

He would prove influential after coming off the bench in that Champions League final in Istanbul, helping the club recover from a three-goal half-time deficit and scoring in the resulting penalty shoot-out success over AC Milan.

Hamann would make 283 appearances for the club in seven seasons, before joining Manchester City after a change of heart over a move to Bolton Wanderers. He would make 71 appearances over three seasons for the club, before spending a brief spell at MK Dons.

The Birmingham-born forward came through the youth ranks as a precocious talent at Manchester City, though made just 32 first-team appearances for the club.

Despite being one of the club’s best prospects and the ambition of their recent billionaire takeover, Sturridge opted to leave for Chelsea after his contract expired in 2009.

He would spend four seasons largely on the fringes at Stamford Bridge, before seemingly finding a home at Anfield after being signed by Brendan Rodgers for £12m in January of 2013.

Striking up a brilliant partnership with Luis Suarez, Sturridge would fire 36 goals in his first 50 appearances for the club before injuries ravaged his latter seasons on Merseyside.

After six-and-a-half years at the club he would leave this summer for Turkey, having scored 67 goals in 160 appearances and helping Jurgen Klopp’s side to Champions League success last season.

Signed as a talented teenager from the QPR academy, Liverpool would hand a debut to the promising winger as a 17-year-old, where he would quickly show he had the potential to develop into an elite talent.

He would play a key role as Brendan Rodgers’ side came close to ending their long wait for a league title in 2014, working in tandem alongside Sturridge and Suarez in a free-scoring Liverpool side.

In three seasons as a Liverpool regular he would score 23 goals in 129 appearances, before agitating for a move after a contract dispute with the club. He would be sold to big-spending Manchester City in the summer of 2015, a move which has made him wholly unpopular on Merseyside.

In four seasons in Manchester, however, he has flourished from talented winger to all-round forward, increasing his goal and assist contribution season upon season and winning a host of accolades.

A two-time Premier League winner and a member of the City side that completed English football’s first ever domestic treble last season, Sterling was rewarded for his performances by winning a Football Writer’s Footballer of the Year and PFA Young Player of the Year double.

Still just 24-years-old, the sky seems to be the limit for the England international who has scored 83 goals in 207 appearances since his high profile move to the Etihad.

Read: Five of the Premier League’s most notorious divers ever