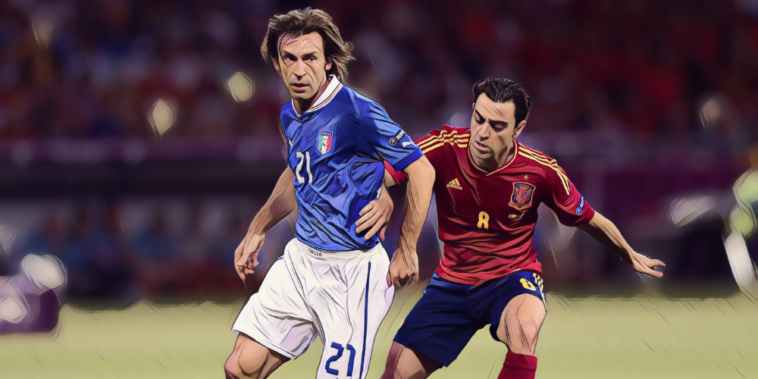 UEFA’s European Championship was co-hosted for the first time during the 2012 edition, a tournament which saw Spain continue their unprecedented period of success on the international stage.

The Spanish made it three consecutive major tournament victories in a golden dynasty for La Roja, thrashing Italy in Ukraine to be crowned champions of Europe for a third time.

Fernando Torres won the Golden Boot and become the first player to score in two finals, whilst England’s misfortune from the spot saw the Three Lions once again crash out of a major tournament via a shoot-out.

Named as the best player at the tournament following Spain’s final success, Andres Iniesta was arguably the champion’s leading light in a tournament that cemented the nation’s legacy.

Iniesta had scored the winning goal in the World Cup final two years earlier, but was arguably at his brilliant best at Euro 2012 as he pulled the strings in a Spanish midfield of the highest calibre.

The Barcelona midfielder was at the forefront of Spain’s incisive passing football, the perfect exponent of the give and go, tiki-taka style that helped form an era of unprecedented success.

Iniesta was named as the best player on the pitch in Spain’s opening 1-1 draw with Italy, before starring as Vicente del Bosque’s side failed to concede another goal on their way to becoming champions again.

There was no stopping Iniesta at EURO 2012 🤩🔥pic.twitter.com/CXYbCMbxPU

He was named Man of the Match for a third time in the tournament during the final success over group opponents Italy, following on from his best afield showing in the 2010 World Cup final.

Had the best player award headed to Andrea Pirlo instead of the brilliant Iniesta, there would unlikely have been many grumblings given the Italian’s effortless elegance at the base of the Azzurri midfield.

Just a year after AC Milan had deemed the regista to be on the decline, Pirlo was starring amongst Europe’s elite as the creative fulcrum of an Italy side that finished as runners-up to Spain.

Pirlo turned 33 in the weeks before the tournament but showed his class throughout, dictating the play from deep and providing moments of stylish brilliance.

He assisted Antonio Di Natale’s goal in Italy’s opening fixture before scoring a fabulous free-kick in a 1-1 draw with Croatia, notching another assist as the Azzurri sealed progress with a win over already-eliminated Ireland in their third group fixture.

His performance against England in the last eight was quite simply exquisite as he controlled the game, memorably embarrassing Joe Hart with a Panenka penalty in the shoot-out before earning his third Man of the Match award in his nation’s semi-final win over Germany.

Lifting the trophy ultimately proved a step too far, but Pirlo showcased why he was one of the best midfielders of a generation.

Germany were drawn in the tournament’s ‘Group of Death’ but made a mockery of the challenge, winning each of their three games to progress as winners in comfortable fashion.

Central to wins over the Netherlands, Portugal and Denmark was midfielder Sami Khedira, who alongside Bastian Schweinsteiger provided an all-action presence in the centre of the pitch.

He assisted Mario Gomez’s winning goal in the German’s opening game against Portugal and drove his side forward throughout the finals, whilst he netted a thumping volley in the 4-2 win over Greece in the quarter-finals.

Germany’s run towards success was ended in the semi-finals by Italy, but Khedira was their best player and earns selection over names such as Cristiano Ronaldo and Alan Dzagoev here.

Any one of Spain’s midfield contingent could have made this list, but Xabi Alonso’s performances deserve inclusion with Euro 2012 dominated by cultured midfield talents.

Alonso’s exceptional passing range belonged in a Spanish midfield that prided ball retention above almost all else, the Real Madrid midfielder keeping the ball on a conveyor belt of possession alongside the likes of Iniesta, Sergio Busquets and Xavi.

Alonso was superb throughout the tournament and stepped up to help La Roja past France in the quarter-finals, scoring both goals in a 2-0 victory for Del Bosque’s eventual champions.

There has never been a more talented crop of midfielders playing simultaneously for one nation and the Spanish midfield was the key part of the country’s incredible success of that era.

Mario Balotelli may not have been the tournament’s defining player, but he produced one of the competition’s most memorable individual displays in a performance that offered a glimpse of the talent that has sadly never been fulfilled.

Balotelli helped Italy through a testing group stage featuring champions Spain, Croatia and the Republic of Ireland, the Azzurri progressing unbeaten with the forward scoring in the must-win final fixture against the Irish.

He scored in the shoot-out as England were eliminated following a goalless draw in the quarter-finals, before becoming the protagonist of Italy’s semi-final win over a German side who had reached the last four in fine fashion.

Balotelli tormented the German defence to score twice, the first a towering header before a confident finish that was lashed high beyond Manuel Neuer to double Italy’s advantage.

It was brilliance from Balotelli and his stoney-faced expression upon scoring the second is etched in the memories of football fans, an evening when the frustrating forward showed what he was truly capable of.