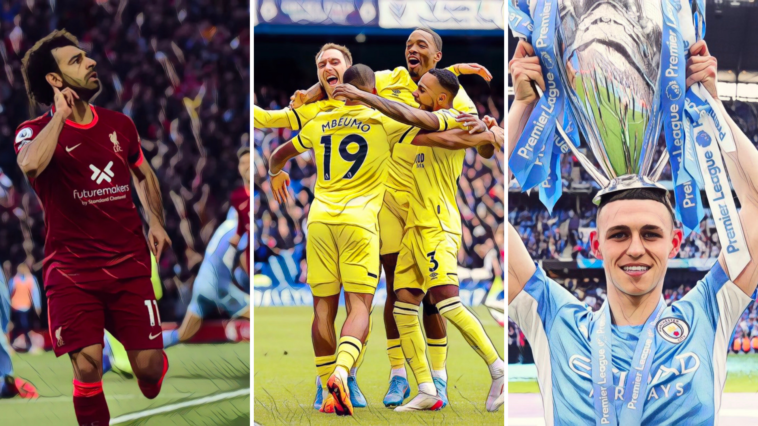 We’ve reached the end of what has been another brilliant season of Premier League football, a campaign that has included no shortage of unforgettable moments.

Manchester City are the Premier League champions once again after sealing a fourth crown in five seasons, holding off the challenge of Liverpool to cement their status as the division’s dominant force.

There was less positive news for Norwich, Watford and Burnley however, who will be watching the 2021/22 top-flight season from a distance after suffering relegation to the Championship.

Following the final round of fixtures, we’ve decided to reminisce on the season gone by and hand out our Premier League awards for the 2021/22 campaign.

Salah’s form might have slowed down the final straight but it’s difficult to look past the Egyptian, a footballer who has become a production machine in the final third since signing for Liverpool.

This season the 29-year-old became just the fourth player to lead the Premier League for goals and assists in the same campaign, winning a third Golden Boot to join goalscoring greats in Alan Shearer, Thierry Henry and Harry Kane among the accolade’s three-peat winners.

Even given football’s modern evolution, that Salah is achieving these numbers from a wide role is extraordinary and he also provided a career-best 13 league assists to beat Trent Alexander-Arnold to the Playmaker Award.

Throughout the first half of the season there many lauding Salah as the world’s finest footballer and his performances were on another level to anyone else in the division. He has been key to Liverpool’s challenge on four fronts in 2021/22 and is a fitting winner of our Player of the Season accolade.

Foden is favourite to win a second PFA Young Player of the Year award in succession and with good reason, with the Manchester City forward remaining the most exciting young talent in the division.

The 21-year-old scored nine league goals as City defended the title, whilst it has often been a joy to watch Foden operate in tight areas with his immaculate first touch and flawless close control.

Foden has already racked up 169 senior appearances for his boyhood side and is now a winner of four Premier League titles, moving past icons such as Frank Lampard, Patrick Vieira, Yaya Toure and Cristiano Ronaldo before celebrating his 22nd birthday.

In Foden and the incoming Erling Haaland, City now boast arguably the two finest footballers in their age-bracket anywhere across Europe and the prospect of the duo combining is an exciting one for all associated with the club.

The destination of the title was undecided heading into the final weekend of the season, with Manchester City taking on Aston Villa with their fate in their own hands.

City made hard work of it on a thrilling final day of action, trailing 2-0 at the Etihad with just 14 minutes remaining. After the manner of the club’s Champions League exit to Real Madrid, City were forced to show the character of champions to roar back in a frantic five-minute spell that saw Pep Guardiola’s team score three times.

Guardiola’s game-changing substitutions changed the complexion of the clash and ensured City came from behind to win, a result which ensured a fourth Premier League title in five seasons headed to the Etihad.

An honourable mention must go to the return of Christian Eriksen, following the distressing scenes of his collapse at Euro 2020. His profound impact on Brentford’s season only added to the narrative in one of the most feel-good stories of recent Premier League campaigns.

Thomas Frank’s achievements with Brentford this season have been remarkable, with the Bees – whose wage bill is dwarfed by their rivals – enjoying a comfortable first season in the Premier League.

The Bees began with a 2-0 win over Arsenal and also took points from Chelsea, Liverpool and Spurs, in addition to a London derby double over West Ham.

Their success has come whilst playing attractive attacking football and Brentford’s savvy recruitment ensured the club never looked in true danger of relegation, before rising to a respectable 13th-place finish.

Pep Guardiola’s deserves a mention after another title for his Manchester City machine, whilst Jurgen Klopp could still end the season just one Premier League point from winning an unprecedented quadruple.

Premier League clubs made a mockery of suggestions there’s no value in the winter window in 2022, with a number of transformative signings arriving in January.

Dejan Kulusevski, Bruno Guimaraes and Christian Eriksen were among the best new arrivals in January, though its hard to look past the immediate impact of Luis Diaz at Liverpool.

Rarely has a footballer looked as perfectly suited to a new side’s style, with the Colombian emerging as a fan favourite for his explosive and exiting injection of quality into the Reds’ forward line.

Diaz’s arrival helped Liverpool remain in the title race until the final day and the 25-year-old could yet finish the season with three major trophies to his name.

It’s been a stunning start for the former Porto player, who might only have scratched the surface of what he is truly capable of.

Romelu Lukaku, Jadon Sancho and Raphael Varane are among the marquee men to have disappointed this season, with each having failed to fulfil expectations.

Bryan Gil, however, might just have been the worst signing of the Premier League season. Signed for a significant sum of £21.6m – plus Erik Lamela in part-exchange – from Sevilla, he featured for just 86 minutes across nine substitute appearances for Tottenham before being shipped back on loan to Spain in January.

Occasion and aesthetic make Mohamed Salah’s individual goal against Manchester City our Goal of the Season, a moment of world-class quality in one of the games of the Premier League season.

Salah’s goal was the stand-out moment as the Egyptian slalomed his way through a succession of blue shirts before firing home, leaving a whole host of City defenders in his wake as Anfield gasped with each sequence of his solo stunner.

Shock of the Season – Chelsea 1-4 Brentford

The headline result of Brentford’s first Premier League season came at Chelsea, as the Bees secured a first win over the West Londoners since 1939 with a brilliant second half performance.

Thomas Frank’s side had fallen behind to Antonio Rudiger’s thunderbastard from distance, but recovered in stunning style to cut apart the reigning European champions at Stamford Bridge.

Christian Eriksen was on the scoresheet as the Dane orchestrated a superb showing from the Bees, a huge upset and the Premier League’s Shock of the Season.

The constant criticism and jibes directed at Joelinton seem a distant memory now, following a remarkable renaissance for the Brazilian at Newcastle.

Joelinton has been a revelation since being moved into a deeper midfield role, one which has brought the best from his attributes with the 25-year-old a brilliant box-to-box presence.

He had a huge impact in Newcastle’s revival under Eddie Howe, one which saw the Magpies finish 11th despite failing to win any of their opening 14 games of the campaign.

His impressive performances saw Joelinton named as Newcastle’s Player of the Season for 2021/22 and capped a brilliant redemption arc for the former £40m flop.

Their meeting at Anfield in early October was a Premier League classic, one that lacked the nervous tension of high-pressure match-ups as two teams oozing confidence and quality went toe-to-toe in search of a knockout blow.

It ended in a draw following a thoroughly entertaining 2-2 draw, as did the return at the Etihad. Their ding-dong battle was a microcosm of the title race, one fought until the end as City eventually edged their Merseyside rivals to be crowned champions.

Brentford’s overachievement has already been discussed in our tribute to Thomas Frank, who made a mockery of the financial disparity between the Premier League outfit and their new divisional rivals.

Having come up via the play-offs last season, Brentford performed above all expectations to not only survive, but thrive, in their first Premier League season.

🏆📊 Introducing our xG Premier League Manager of the Year…

A brilliant season for Brentford.

Norwich and Watford – the two teams who finished above the Bees in the Championship last season – will have taken notes after dismal relegation campaigns.

Graham Potter’s leading of Brighton to a best-ever Premier League finish of ninth deserves a mention with the Seagulls steady progress continuing under one of the division’s highly-rated coaches.

Everton got there in the end to secure their Premier League status for another season, but their flirtation with relegation until the final week of the season was a damning indictment of their mismanagement in recent seasons.

The Toffees board have squandered huge sums on players whilst still managing to regress, whilst the decision to appoint Rafael Benitez last summer was a misjudgement that all but the club’s hierarchy appeared to see coming.

Benitez has been a fine coach but the ill-feeling towards the ex-Liverpool boss set the tone for a dismal season, one which saw Frank Lampard arrive as his replacement and eventually lead Everton to safety.

It was an unusual year, very difficult. Although we know we have escaped an even worse scenario, there are several lessons for the future. Everton is a giant club and deserves to fight at the top of the table, for places in continental competitions and for titles… pic.twitter.com/iOxdysEzQi

The Merseyside club are a team with ambitions of returning to European football, but a huge rebuild is required to fulfil those objectives after a season which so nearly ended in disaster.

Manchester United – after a summer transfer window that included the marquee arrivals of Jadon Sancho, Raphael Varane and the returning Cristiano Ronaldo – are fortunate to escape this unwanted accolade after a dreadful season that ended with a record-low Premier League points total.