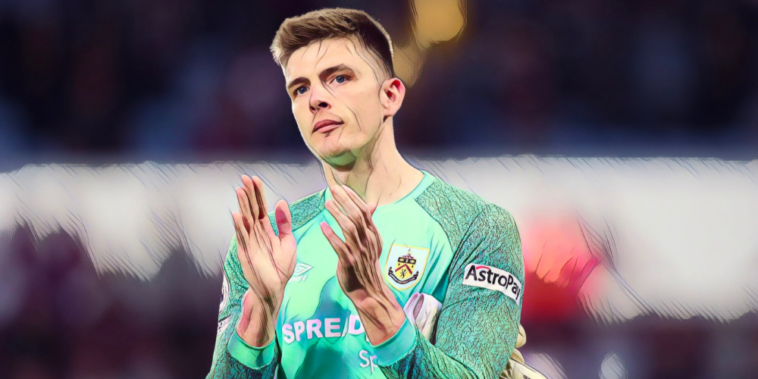 Norwich, Watford and Burnley will spend next season in the Championship after relegation from the Premier League, the trio ending the 2021/22 campaign inside the division’s dreaded drop-zone.

For Norwich and Watford it’s an instant return to the second tier after promotion last season, whilst Burnley’s six-season stay in the top division was ended after a final day defeat at Turf Moor.

Despite their struggles there will be a number of names from each club who will attract Premier League transfer interest and we’ve picked out five relegated players set to be in demand this summer.

Nick Pope is expected to leave Burnley this summer to keep alive his international ambitions, with the eight-cap England goalkeeper hopeful of a place in the World Cup squad for Qatar.

Pope enjoyed an impressive season despite the Clarets’ drop into the Championship and recent reports have suggested the club will demand a significant fee for the 30-year-old.

Pope has one year remaining on his contract, though Burnley have the option to extend for a further season.

8 – Nick Pope made eight saves in helping his Burnley side to a point against Aston Villa, the joint-most he’s ever made in a single Premier League game. Heroic. pic.twitter.com/fanywcpCO4

Having signed for a fee of just £1m from Charlton Athletic in 2016, he has since kept 46 clean sheets in 141 top-flight appearances for Burnley to represent one of the club’s best pieces of business in recent seasons.

West Ham are understood to be long-term admirers, but possess an option-to-buy in the loan agreement that saw Alphonse Areola move to the London Stadium from PSG last summer.

Fulham are also said to be interested after promotion as the Cottagers look to strengthen their squad and consolidate in the Premier League after a yo-yo existence in recent seasons.

Watford are heading back to the Championship after a season of struggle this time around, with the carousel of managerial changes at Vicarage Road leading to a now customary unsettled season.

Emmanuel Dennis was the bright spark in an otherwise forgettable season for the Hornets, with his £2m arrival from Club Brugge last summer representing a bargain buy.

Dennis with his eighth goal of the season 🇳🇬🔥 pic.twitter.com/KgTAHSASvu

Dennis scored 10 goals and provided six assists during an impressive debut season in the Premier League and is another who will be on the radar of rival sides.

West Ham have already been linked as the Hammers look to ease the burden on Michail Antonio and could make a swift move for a player who provided 16 G/A out of Watford’s 33 goals scored this season. His versatility and work-rate off the ball will also appeal to David Moyes.

James Tarkowski is set to be one of the most in-demand relegated Premier League players this summer, with the centre-back available as a free agent.

Tarkowski has been one of Burnley’s best performers in recent seasons and earned two caps for England in 2018, though turned down the chance of a new contract with the Clarets in search of a new challenge.

James Tarkowski on being relegated from the Premier League with Burnley. pic.twitter.com/lHIrtS5Bnq

Aston Villa – who have already secured the free transfer signing of Boubacar Kamara from Marseille – are interested in adding another shrewd Bosman signing to their ranks, whilst Everton and Fulham are also understood to be in the race for Tarkowski.

The 29-year-old ranked second in the Premier League for aerial duels won in 2021/22 and is unlikely to be short of options as he decides on his next club.

Max Aarons appears likely to leave Norwich this summer, with the right-back having been relegated for the second time in three seasons.

Despite reported interest from several leading sides in England and Europe, Aarons remained with the Canaries following their drop into the Championship in 2019/10 and helped the club bounce back at the first attempt.

Another relegations means the 22-year-old is likely to depart and his departure could fund the Canaries rebuild, with a number of Premier League sides – including Manchester United and Tottenham – in the market for an attack-minded right-back.

Former Manchester United defender Rio Ferdinand recently suggested Aarons as a potential addition for his former side, with Aaron Wan-Bissaka not understood to be a part of Erik ten Hag’s future plans.

“Someone like Max Aarons you could put him like a Chris Smalling-type signing where they come in and they have an impact,” he told his Vibe with FIVE YouTube show.

“They may not be straight starters immediately but they go and they stay there for 10 years and have a really good career and they impact the club at different levels.”

Maxwel Cornet’s arrival at Burnley last summer was a different addition to the largely British-based recruitment of Sean Dyche, who secured a £13.5m move for the versatile Lyon forward.

Cornet burst onto the scene with four goals in his first five appearances for the Clarets and ended the season as the club’s leading scorer on nine goals, the highest total of his career to date.

Burnley’s relegation as now opened up the prospect of an exit from Turf Moor and The Athletic have revealed details of a £17.5m release clause in Cornet’s contract, as a result of relegation from the top tier.

In an inflated market that figure could prove a shrewd signing for Premier League clubs, with Cornet’s versatility in operating as a centre-forward, winger or at left-back making him an appealing option this summer.

Already adapted to the rigours of English football and with the potential to improve further in a more attack-minded side, the 25-year-old could find himself in high demand this summer.