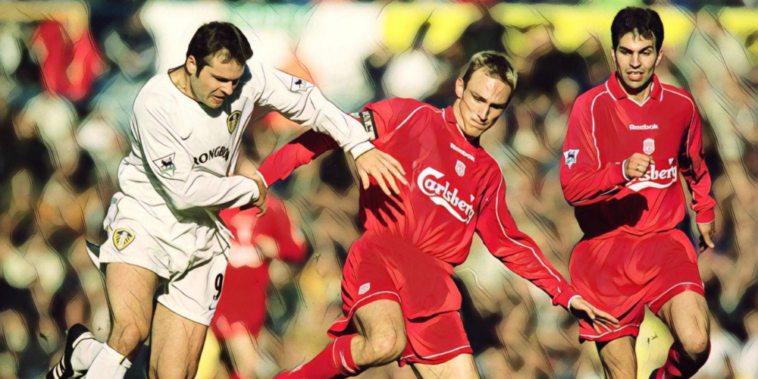 Liverpool host Leeds in the Premier League this weekend, the latest clash between two sides who have played out some memorable contests in the modern era.

Leeds’ return to the top-flight has been a welcome one after almost two decades in the lower divisions, with the Whites having once been regulars at the top end of the Premier League.

Both sides have had their problems this season however, with Jesse Marsch’s team arriving at Anfield in the bottom three, following a run of four consecutive Premier League defeats.

Ahead of their meeting at Anfield, we look at five of the best games between Leeds and Liverpool during the Premier League era.

The curtain-raiser for the inaugural Premier League season proved a classic contest at Wembley, as Eric Cantona scored a hat-trick for Leeds in a thrilling win over Liverpool.

Leeds had been crowned as champions in improbable fashion the previous season, whilst Liverpool had secured FA Cup success despite finishing sixth in a disappointing domestic campaign in the final First Division season.

In a game filled with attacking excitement and sub-standard defending, Cantona opened the scoring from Rod Wallace’s cut-back after firing past Bruce Grobbelaar.

⚽️ | “There’s something of a party atmosphere here amongst the #LUFC supporters” Were you at Wembley as Cantona, Dorigo and The Whites lifted the trophy? pic.twitter.com/f88kCfiN2R

Ian Rush levelled the scores soon after, but Tony Dorigo’s deflected free-kick ensured Leeds headed into the half-time interval ahead.

Dean Saunders brought Liverpool level once again in the second period, before Cantona decided the game and completed his hat-trick. His second goal was a brilliant rifled effort and he then rose highest to head home his third and complete a Wembley treble.

Gordon Strachan’s comical own goal narrowed the scoreline, but Leeds held on to claim the Charity Shield for the first time since 1969.

Leeds were a rising force in the Premier League during the early millennium and a November 2000 meeting with Liverpool at Elland Road produced an all-time classic.

David O’Leary’s side were fearless in their bid to challenge the elite and had reached the UEFA Cup semi-finals the previous season, before 2000/01 campaign took on greater heights as Leeds reached the same stage of the Champions League.

Injuries had decimated the club’s options as a Liverpool side with grand ambitions of their own arrived in west Yorkshire, with the Reds racing into a two-goal lead through goals from Sami Hyypia and Christian Ziege.

Leeds roared back with Mark Viduka the inspiration behind their performance. The summer signing from Celtic lifted a finish over Sander Westerveld – following a mistake from Ziege – before heading home an equaliser at the near post.

Vladimir Smicer’s goal restored Liverpool’s lead and made it 3-2 to the visitors, but Viduka twisted and turned inside the area before firing home his hat-trick goal to restore parity.

There was still time for one last dramatic moment, as Viduka scored his fourth goal of the afternoon with a delicate dink over the goalkeeper to ensure Elland Road erupted.

The Australian’s third and fourth goals – scored barley two minutes apart – proved a fitting finale to a brilliant game and one of the Premier League’s great individual performances.

Later that season the two teams renewed rivalries at Anfield, with both in pursuit of the Premier League’s final Champions League place.

Leeds began in rampant fashion to take a two-goal lead on Merseyside, as first-half goals from Rio Ferdinand and Lee Bowyer put David O’Leary’s side in control of the contest.

Ferdinand met Ian Harte’s corner to open the scoring after just four minutes, before Bowyer netted at the second attempt to double the visitor’s advantage.

Steven Gerrard’s goal brought Liverpool back into the game in the second half, but the midfielder was later shown a second yellow card for a foul on David Batty as the Reds crashed to a costly defeat.

The win moved Leeds into third and six points clear of Liverpool in the race to secure Champions League qualification, though it was Gerard Houllier’s side who would ultimately pip Leeds by a single point in a final finish that had disastrous financial consequences for the Yorkshire side.

Liverpool were held to a draw in a pulsating clash with Leeds at Elland Road in February 2004, as the two teams shared four goals in a breathless first half.

Leeds were fighting against relegation following a fire sale of talent amid the club’s financial crisis, but battled to a point against their Champions League chasing rivals.

Harry Kewell – making his first return since leaving Leeds for Liverpool – opened the scoring against his former side, before goals from Eirik Bakke and Mark Viduka swung the momentum in Leeds’ favour.

Milan Baros scored an equaliser just before half-time for Liverpool, with both sides squandering second half chances to win the game after the break.

Alan Smith came closest to a decisive breakthrough, as he hit the crossbar for a Leeds side who ended the season in 19th to drop out of the Premier League.

Leeds’ return to the Premier League after a 16-year absence proved unforgettable as Marcelo Bielsa’s side went toe-to-toe with the defending champions at Anfield.

Liverpool took the lead on three occasions, but each time found themselves pegged back as the newly-promoted side opted for a fearless approach on Merseyside.

Mohamed Salah scored a hat-trick for the Reds to eventually seal a 4-3 win, including a late winner from the spot after Leeds substitute Rodrigo had clumsily bundled over Fabinho inside the penalty area.

The first fixture of the 2020/21 season proved one of its very best, just the second Premier League game played on the opening weekend of a season to see five goals scored before half-time, following Manchester United’s 5-1 win over Fulham in August 2006.