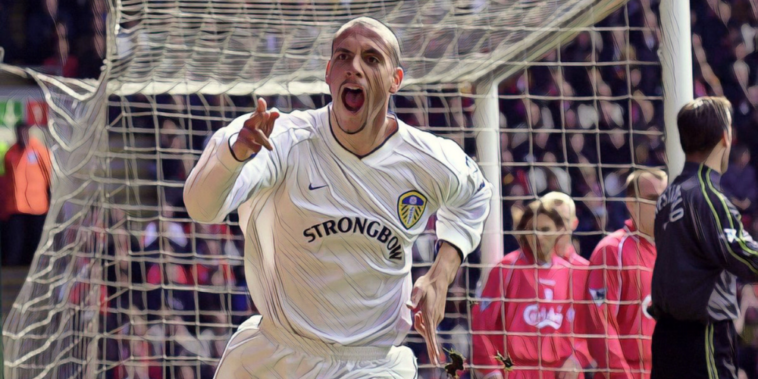 Leeds and Manchester United meet in the Premier League this weekend, in the latest instalment of a fiercely contested northern rivalry.

There’s no doubting the animosity between the two clubs despite not sharing the same city, with the visiting Red Devils sure to feel the atmosphere of a packed Elland Road this weekend.

Despite the dislike for each other from both sides of the Roses rivalry, there have been several players who have crossed the divide and represented both clubs.

Ahead of a a huge clash this week, we look at five of the best players to have played for both Leeds and Manchester United.

Johnny Giles crossed from Ireland to sign for Manchester United in the 1950s, with the midfielder handed his debut as the club rebuilt in the aftermath of the Munich Air Disaster.

Giles featured regularly across the following four seasons and won the FA Cup in 1963, before falling out of favour and requesting a move to leave Sir Matt Busby’s side for Leeds United.

The £33,000 fee proved a bargain for Leeds as Giles developed into one of the league’s best midfielders after crossing the Pennines, forming an iconic partnership with Billy Bremner as Leeds returned to, and then topped, the First Division.

He made 527 appearances across more than a decade at Elland Road, winning two First Division titles, one FA Cup, one League Cup, the Second Division, two Inter-Cities Fairs Cups, and the Charity Shield.

Giles was the creative force of a side that also reached the 1975 European Cup final, before losing 2-0 to Bayern Munich at the Parc des Princes.

Manchester United secured the signing of Gordon Strachan from Aberdeen in 1984, with the midfielder having shone as the Scottish side upset the established elite north of the border to win two league titles and the 1983 European Cup Winners’ Cup.

He starred during his first season with the Red Devils to score 19 goals in all competitions, helping the side to FA Cup success after beating Everton at Wembley.

Strachan made 160 league appearances for the club, but a reunion with former Aberdeen manager Alex Ferguson led to the midfielder falling out of favour and moving to Leeds.

The transfer saw Strachan drop down to the Second Division, where he was handed the captaincy and helped Leeds to promotion back into the top tier in 1989/90.

Strachan was named as the FWA Footballer of the Year during Leeds’ return to the top division, becoming the first player to have won the accolade in both Scotland and England.

Dennis Irwin began his career in English football at Leeds United, making 72 appearances for the Second Division side after arriving from Cork.

He was allowed to leave for Oldham on a free transfer and spent four seasons with the club, reaching the latter stages of both domestic cup competitions to attract the interest of Manchester United.

Sir Alex Ferguson later claimed the £625,000 deal to sign Irwin was one of his best pound-for-pound deals, with the full-back a model of consistency across a 12-year career at Old Trafford.

Irwin won seven Premier League titles, two FA Cups, the League Cup, Champions League and Cup Winners’ Cup amongst his list of accolades, proving an irreplaceable figure in a side who dominated English football throughout the nineties.

He made 529 appearances for the Red Devils before finishing his career at Wolves, a period in which it was a rarity for the Irishman to fall below the standard expected.

Eric Cantona’s move between the clubs is perhaps the most notorious, a transfer regarded as being the catalyst behind Manchester United’s rise as England’s dominant force.

Cantona signed for Leeds from Nimes and won the First Division title during his opening months at Elland Road, before starting the following season with a Charity Shield hat-trick against Liverpool and the first-ever Premier League treble.

Just a couple of months into that 1992/93 season, however, Cantona made the move to Manchester in a shock deal, with Howard Wilkinson having been prepared to allow the talented but temperamental forward leave.

It proved a masterstroke as Cantona inspired Manchester United to a first league title in 26 years, scoring nine goals and providing a further 11 assists as the Red Devils won the Premier League.

Across the following four seasons he became arguably the most influential footballer in the division, winning four league titles in five seasons and being named as both the PFA Player of the Year (1994) and FWA Footballer of the Year (1996).

After 185 appearances and 82 goals he announced his shock retirement in 1997, departing as one of the most iconic players in both the Red Devils’ and Premier League’s history.

Leeds and Manchester United took turns in making Rio Ferdinand football’s most expensive defender, each spending a record sum to sign the centre-back.

Leeds splashed out £18m to sign Ferdinand from West Ham in 2000, a deal that also represented a British transfer record fee. He spent two seasons with the club as David O’Leary’s side competed both and home and in Europe, challenging for the Premier League title and reaching the Champions League semi-finals in 2000/01.

Following his performances at the 2002 World Cup with England and Leeds’ increasingly uncertain financial situation, he completed a £30m move to Manchester United.

His first season saw the Red Devils win the Premier League and it was the start of a glittering period of success for the centre-back, who won 14 trophies in his 12 seasons at Old Trafford.

Ferdinand reigned as one of the best defenders in European football during his finest seasons, a defender who brought an effortless cool and composure.

He captained the side during their 2008 Champions League success, as the Red Devils beat Chelsea to be crowned champions of Europe for a third time.