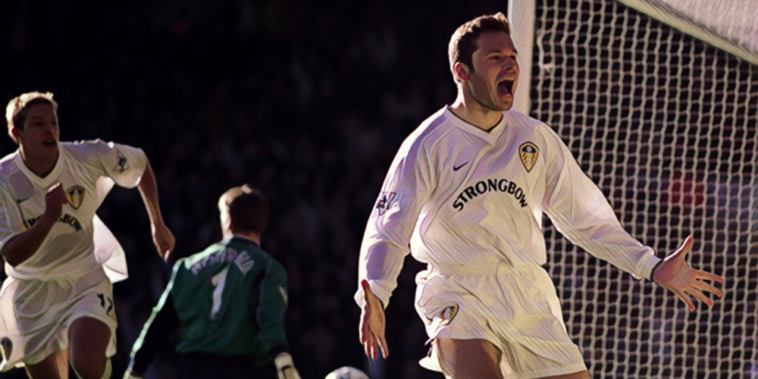 Leeds United were riding a wave of momentum as the first decade of the Premier League reached its conclusion.

David O’Leary’s fearless side were growing in confidence and quality, with a team built around a core of promising young talent produced from within their own academy ranks.

O’Leary had never previously managed before taking charge at Elland Road, but set about an overhaul of the squad that included the promotions of prospects including Jonathan Woodgate, Harry Kewell and Alan Smith.

After securing a top three finish in the Premier League and Champions League qualification in 2000, the club’s ownership spent big in a bid to end the division’s duopoly of Manchester United and Arsenal.

Rio Ferdinand arrived in a British transfer record £18m deal from West Ham in November, while Olivier Dacourt signed from Lens to provide bite in midfield. In search of goals, O’Leary headed north of the border, parting with £6m to sign Mark Viduka from Celtic.

Viduka spent just one full season at Parkhead, but it was enough to capture a southern audience. He scored 25 goals in 27 league appearances, performances which earned the Australian the SPL Golden Boot and Player of the Year Award.

Viduka’s profile was built for the Premier League. He was broad and powerful, but with deceptive grace and an immaculate first touch that trapped the ball instantaneously. It was a combination which made him a major threat.

After a slow start to the season he scored his first league goals with a brace against Spurs, before another double downed Charlton a fortnight later.

Leeds had been given a glimpse of what the Aussie could offer, but an autumnal clash with Liverpool saw ‘Dukes’ reach his Premier League pinnacle.

The visitors arrived at Elland Road with grand ambitions of their own. The two clubs shared similarities, with each on the rise under new managers and hopeful of challenging the titans from Manchester and North London.

However, Leeds’ preparations were in chaos. O’Leary was without 10 first-team players and Liverpool, sensing blood, wasted little time in taking advantage of the host’s depleted defence.

Leeds – without a win in five in all competitions – were up against it, but in Viduka possessed a player capable of turning the tide. Across the course of the lunchtime kick-off, he delivered one of the most devastating individual performances in Premier League memory.

Viduka’s first goal brought Leeds back into the contest. Alan Smith charged down Ziege’s attempted clearance, with the ball ricocheting fortuitously into the path of the unmarked Australian.

As red shirts closed the space, Viduka kept his cool. After taking two touches to set the ball, a third delicately lifted the ball over the onrushing Sander Westerveld to half the deficit.

Back in the game before the break, it took just seconds of the restart for Leeds to level. Gary Kelly worked his way down the right, before delivering a cross into the Liverpool box. Waiting was Viduka, who powered home a near post header to send the home crowd into raptures.

The forward wheeled away in celebration, blowing kisses to an elated Elland Road.

The momentum appeared to be with Leeds, but the pendulum swung back in Liverpool’s favour. In a Czech combination, Berger centred for compatriot Smicer to restore the Reds’ advantage.

O’Leary’s team, however, were far from done. Energetic and exciting with a verve and valiance only youth can bring, Leeds roared back.

Viduka claimed his hat-trick to restore parity once more, leaving Markus Babbel and Berger in his wake with a sharp spin inside the area. Berger, contorted and confused, crashed to the ground as Viduka rifled in a finish off the far post.

Viduka’s display of devastating finishing had transformed the game, but there was still time for one more moment of genius from Leeds’ number nine.

Dacourt’s driven effort found only the feet of Viduka, in behind the Liverpool defence after beating the offside trap. His first touch opened the angle, before a second impudently chipped the ball over Westerveld and a late lunge from Jamie Carragher.

“I think there’s certain players that, physically, you can’t cope with them,” Carragher reflected to Sky Sports.

“Viduka was someone who came to the ball, he wanted the ball to his feet, and then he’d turn. He’d be backing in and wanting to turn you.

“You were never going to get in front of him or knock him off the ball. You couldn’t stop Viduka from doing what he wanted to do, which was hold the ball up and get his team up the pitch.”

Former Leeds teammate Lee Bowyer agreed with that stance, admitting Viduka was ‘unplayable’ when at his destructive best.

“Technically his feet, for a big fella, were unreal and on his day he was unplayable. He just did what he wanted, when he wanted, and no one could stop him from doing it,” he told Sky Sports.

“For myself, as a midfielder who wanted to run beyond, there was no one you could play with who was better than him for holding the ball up and recognising that you’re making those runs.

“He had everything. In that game, his goals and his finishes for a big fella, were exceptional.”

Viduka ended that maiden season with 22 goals in all competitions, as Leeds upset the odds to reach the Champions League semi-finals. He spent four seasons with the club in a period that saw Leeds dare to dream, bringing a brand of football to the Premier League that still resonates today.

Their focal point was a menacing Melburnian signed from Scotland, one who at his best bulldozed defences with a mix of strength and swagger. His undeniable talent was never more apparent than a brilliant big-game performance in the lunchtime sunshine against Liverpool at Elland Road.