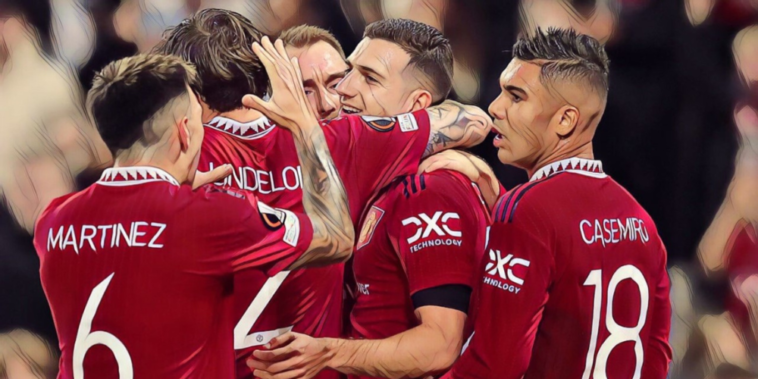 Erik ten Hag says he saw ‘a lot of positives’ from Manchester United’s 3-0 win over Sheriff Tiraspol as Cristiano Ronaldo made a goalscoring return to the side.

United cruised to a comfortable Europa League win at Old Trafford, with Ronaldo scoring the Red Devils’ third goal on his return to the side, having been excluded for last weekend’s draw at Chelsea as punishment for refusing to come on as a substitute against Tottenham on October 19.

Diogo Dalot opened the scoring for United, before Marcus Rashford’s header doubled the advantage. A positive evening was completed as Ronaldo wrapped up the win late on and Ten Hag was pleased with the performance from his side, though felt the winning margin should have been bigger.

“You want always more and I think we scored three goals, but I think we should have won with at least 5-0,” he told BT Sport.

“But I think, in the end, there were a lot of positives in this game. The clean sheet, we didn’t concede counters, so we attacked well, were organised, they couldn’t get out. So the counter-press was really good and we created a lot against a real compact opponent and, what I said, we scored three – we should have scored even more but there was a threat, we created and that’s good.”

Ten Hag tweaked his team during the second half and used Rashford and Ronaldo as a front pairing, with Bruno Fernandes shifted to the right flank. The Dutchman discussed the changes and was pleased with how the experiment of using two centre-forwards worked.

“The second half, I wanted to see that, Cristiano and Marcus close together in the no.9 and 10 position and I think it can be a trap for opponents. It is always difficult against such players to defend that and we have seen that. They can take benefit from each other. It was also good to see for the right side when Bruno [Fernandes] went out and you get a different dynamic on the right as well, so I’ve seen some positive points in this game.”

Cristiano Ronaldo marked his return to the Red Devils with a goal taking his tally to 701… 💫#UEL pic.twitter.com/spZuMi3bi5

Ronaldo’s inclusion dominated the pre-game headlines, following his high-profile omission at Chelsea last weekend. Ten Hag had stressed he was keen to move on from the incident this week and praised the performance of the 37-year-old on his return to the team.

“The pressure is always there. Ronaldo knows that and we have to deal with it. All Manchester United players know that. All top scorers need that, every time, the confirmation they can do it. Tonight, again, he got his confirmation and he will grow from it. He is hungry. He plays with desire and wants to score goals, as many as possible. He has to invest a lot and the team has to invest a lot to put him in the right positions.”

United remain second in Group E and must win at Real Sociedad in the final round of fixtures to overhaul the Spaniards and top the group. The Red Devils will progress directly to the last 16 – avoiding a last-32 tie with a Champions League dropout side – if Ten Hag’s team better Sociedad’s 1-0 win at Old Trafford.

“So we know what we have to do in Real Sociedad: we have to win there with two goals difference. We have to score two goals, minimum, and don’t concede one.

“The first game, we lost, crazy penalty. So we have to deal with that crazy penalty, so we have to turn [it] around, so that demands a big performance there, demands a winning attitude, but, first, we have Sunday. That’s more important, always go from game to game and we have now focus on Sunday, and West Ham United.”