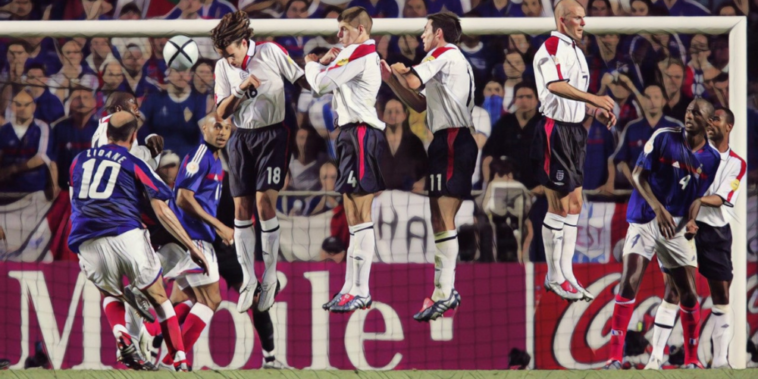 France and England meet in the World Cup quarter-finals this weekend, a showdown between two talented teams with ambitions to be crowned world champions.

England have impressed to reach this stage, but now face a huge test against the reigning world champions, who are looking to become the first team since Brazil in 1962 to defend the World Cup.

Ahead of the clash, we remember five of the best France vs England encounters.

England were crowned world champions on home soil in 1966, securing a first – and so far only – major tournament success.

Alf Ramsey’s side ensured progress from the group stage as winners with victory over France in their final fixture. Roger Hunt – who scored in the earlier group stage win over Mexico – scored a goal in either half for the host nation to secure a 2-0 win at Wembley.

#OnThisDay in 1966, Roger Hunt celebrated turning 28 with a brace in the #ThreeLions' #WorldCup win over France. pic.twitter.com/GRVMwRWGit

England marched on, beating Argentina and Portugal in the knockout rounds before a 4-2 final win over West Germany secured the Three Lions’ greatest moment.

France had thrashed England 5-2 in a European Championship qualification round three years earlier, but there was no repeat for a French side who had began a period of decline.

After a group stage exit at the 1966 finals, Les Bleus failed to qualify for the next two World Cup tournaments.

France were on the rise when the teams next met on the World Cup stage, facing off in the opening fixture of the 1982 finals in Spain.

Les Bleus had the foundation of the team who went on to claim European Championship success in 1984, including an all-star midfield of Luis Fernandez, Alain Giresse, Jean Tigana and Michel Platini that became known as La Carre Magique – The Magic Square.

England had struggled to qualify for the finals but wasted little time in announcing their arrival in Spain. Bryan Robson opened the scoring with England’s fastest ever major tournament goal, timed at just 27 seconds.

Gérard Soler restored parity for France, but Robson’s second of the game – a towering header powered past Jean Luc Ettori – put England back ahead. Paul Mariner rifled in a third as the Three Lions’ tournament began in dream fashion.

Hopes of conquering the world ended in the now defunct and once maligned second group stage, as draws with West Germany and Spain saw England exit the competition without losing a game.

England v France, 1982: When the Three Lions remembered their roar

England looked to lay down a marker in the opening fixture of Euro 2004, as the Three Lions’ Golden Generation took on the holders.

For a long period it looked set to be a statement result for England, who led through Frank Lampard’s 38th-minute header. A teenage Wayne Rooney – making his first major tournament appearance – tormented the experienced opposition, with the 18-year-old rag-dolling Les Bleus’ backline in a memorable performance.

Rooney was brought down for a penalty by Mikaël Silvestre, but David Beckham saw his effort saved by Fabien Barthez. England held on until a collapse in the closing stages, as the brilliance of Zinedine Zidane turned the game.

Zidane curled home a stoppage-time equaliser with a fantastic free-kick past David James, before scoring a second from the spot moments later. Steven Gerrard’s poor back-pass saw Thierry Henry through on goal, with James bringing down the forward to provide Zidane with the chance to complete his rescue act.

England and France went head-to-head once again in the opening fixture of the 2012 European Championship.

Samir Nasri levelled the scores before half-time, as the midfielder found space on the edge of the area before driving a low finish inside Manchester City teammate Joe Hart’s near post.

Neither side could find a breakthrough after the break with the points shared. England topped the group as both teams progressed, but each exited the competition in the quarter-finals.

The most recent meeting between the teams proved an entertaining affair in Paris, one which saw France edge a five-goal encounter on home soil.

Harry Kane gave England a the perfect start when he turned in Ryan Bertrand’s cross inside nine minutes, but the Three Lions soon started to struggle with the vibrancy of France’s attacking options. Les Bleus levelled through Samuel Umtiti after Olivier Giroud’s effort was parried out, before Djibril Sidibé followed in another rebound to give France the lead.

The momentum of the game appeared to swing after Raphael Varane was sent off for bringing down Dele Alli in the area, with Kane making no mistake to dispatch the spot-kick past Tottenham teammate Hugo Lloris and bring England level.

Despite their man disadvantage, France continued to probe for a winner and found it with 12 minutes remaining. Kylian Mbappe picked out Ousmane Dembele in the area and the winger struck a low finish to score his first international goal.