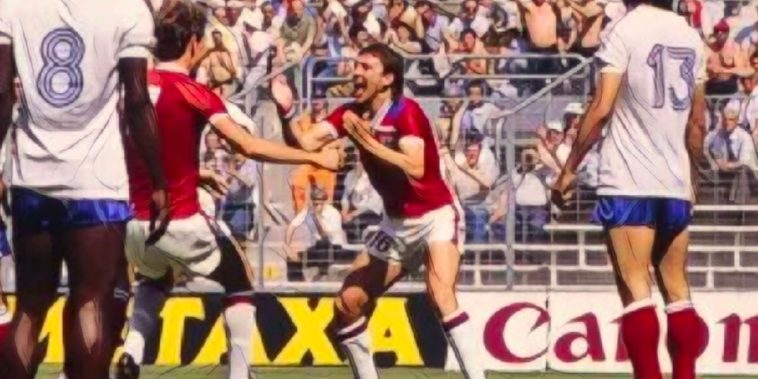 This Saturday evening England take on France in a World Cup quarter-final. You may have read about it somewhere. It’s a big deal.

Given their close proximity in geography and world rankings, it’s a surprise to discover that the two nations have only met twice before in this competition, last doing so over 40 years ago on June 16th, 1982, and despite the other game being part of England’s fabled 1966 triumph, it is this encounter in Spain that is most fondly recalled. Indeed, in many ways, it’s gone down in folklore.

It’s another surprise therefore to discover the memorable match-up so nearly didn’t happen, with Ron Greenwood’s side needing favourable results elsewhere in order to qualify. Among a tough grouping featuring Switzerland, Romania, Hungary and Norway, the Three Lions won only half of their fixtures, leading to accusations from the press they were too conservative, timid even.

Feeling the heat, Greenwood is alleged to have resigned as his team flew out to Bucharest for a particularly crucial commitment, an action that was swiftly hushed up and forgotten about following an impressive victory.

Thanks to some good slices of fortune, however, England did eventually secure passage to Espana ’82 and, Brazil aside, they couldn’t have feared a more difficult opening engagement, paired with France in an otherwise forgiving Group 4.

One of the tournament favourites, Les Bleus were elevated by a wondrous midfield of Luis Fernandez, Alain Giresse, Jean Tigana and Michel Platini that became known as La Carre Magique – The Magic Square – while up front, Dominique Rocheteau, all swishy movement and rolled-down socks, smoked Gauloises and scored loads of goals. It was a fabulous collective that would win the Euros two years later.

As for England, they had arguably the world’s best ‘keeper in Peter Shilton, and Bryan Robson all-action and forever impactful in the middle, while Trevor Francis wasn’t too shabby playing off Paul Mariner up top, but critically Greenwood was deprived of his two best players in Kevin Keegan and Trevor Brooking. Nursing respective groin and back problems, the two-time Ballon d’Or winner and the ageing Hammers maestro wouldn’t be available for selection until a couple of weeks into the tournament.

Still, there was plenty of optimism lingering in the hot and humid Bilbao air, emitting from the thousands of England supporters who had ferried across the Bay of Biscay, presumably full of duty-free. How could that not be the case, this being England’s first World Cup appearance in 12 years and furthermore, a return to the international arena while adorned in Admiral red. You know the kit. The one that is regularly voted as England’s greatest-ever shirt. The one that is England’s greatest-ever shirt.

And there was Robson, not yet christened ‘Captain Marvel’ but showing all the attributes that gained him the moniker.

Remarkably, it took Manchester United’s one-man army just 27 seconds to live up to type and do something marvellous, a throw-in from the right flicked into his path by Terry Butcher and acrobatically thwacked home from close-range. It was, at the time, the quickest World Cup goal ever scored and snagged the player an especially-engraved watch for his troubles, but these are details that only matter now. Back then, it meant England were off and immediately flying; back in the global reckoning after an exile that lasted the entirety of the Seventies.

A clinical strike by Soler halfway through the first half stilled the delirium, but to their credit, the Three Lions continued to probe and create chances, and continued to take the game to their superior foes. As the magic square struggled for symmetry, France were reduced to pot-shots from distance.

An hour in, and England were rewarded for their ambition with another iconic goal, and again it was scored by Robson. It would be nice to describe his athletic header without resorting to cliché but the truth is, he leapt like the proverbial salmon, thundering it past Jean Luc Ettori in goal. A third late-on by Mariner completed a red-letter day for the English, a day that felt symbolic and meaningful but ultimately proved not to be.

Because though England easily dispensed with Czechoslovakia and Kuwait in their remaining group games and went on to draw with West Germany and tournament hosts Spain in FIFA’s bizarre round-robin structure that followed, they exited prior to the semi-finals, a win needed against either of the latter two.

It meant they headed home unbeaten across the whole competition. Unbeaten and robbed by a daft format that was scrapped soon after.

Regardless, those of a certain vintage will never forget that still, sunny afternoon in Basque Country, when England finally recalled who they were, and what they were capable of, and started off proceedings with a bang.