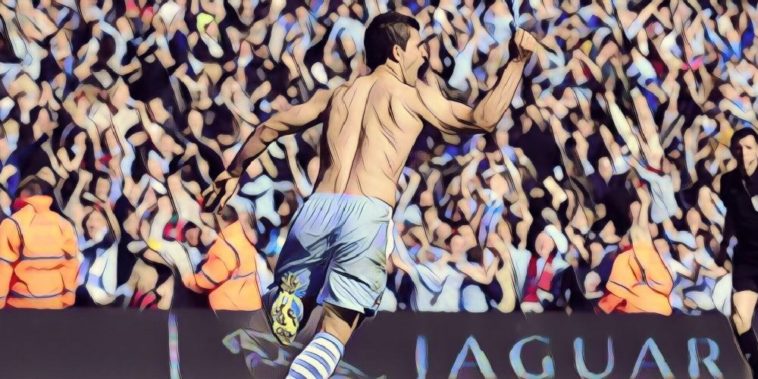 With Argentina currently making the headlines at the World Cup and the Premier League celebrating it’s 25th Birthday this year, we thought it would be the perfect time to take a look at the five best Argentinians to grace the EPL …

Manchester City have spent big money on a lot of superstar players since their Abu Dhabi takeover in 2008, but few players have represented better value for money than Argentinian right-back Pablo Zabaleta. The Citizens paid Spanish side £6.5 million in the summer of 2008 and he would go on to become a lynchpin during the most successful period in the Blues history.

From the period of 2010/14 Zabaleta was arguably the best right back in the Premier League, with his lung busting runs up and down the flank making him a firm fans favourite at the Etihad. His tactical awareness, solidity in one-on-one situations and ability to get forward and support attacks even caused Manchester United legend Gary Neville to laud him as the most complete full back of his era.

Zabaleta left the Etihad for West Ham in the summer of 2017 as a Man City legend after winning every domestic honour available in English football.

Crespo arrived at Stamford Bridge as one of the first raft of high profile signings of the Roman Abramovich era. He brought with him a reputation as one of the World’s top strikers, having spent years ripping defences to pieces in Serie A. However, despite a few flashes of brilliance he failed to bring his best form to the Premier League and when Jose Mourinho took over as Chelsea boss in the summer of 2004 he allowed the Argentina international to go out on loan to AC Milan, where he would famously score two goals in the Champions League final against Liverpool.

Chelsea fans thought they had seen the last of the classy Aregntine, but the following summer Mourinho was unable to sign a back up striker to Didier Drogba so he decided to bring Crespo back to London. Although he featured mostly as a substitute during the 2005/06 season, he had a knack of coming off the bench and scoring crucial goals as Chelsea romped to their second successive Premier League title and the first of Crespo’s goal filled career.

All in all he made 49 appearances for the Blues, scoring 20 goals and despite probably being a little past his best, by the time he arrived in English football to a certain generation of fans he will always be remembered as a truly world class striker.

In the summer of 2006 Mascherano and another man lucky enough to make our list Carlos Tevez – who were both owned by Kia Joorabchian’s controversial Media Sports Investments – were linked to moves to some of Europes biggest clubs like Barcelona, Real Madrid and Juventus. However, in one of the most bizarre transfers in Premier League history the highly rated Argentina internationals ended up signing for West Ham. Things didn’t really work out for the defensive midfielder in East London though, with the ever wise Alan Pardew instead deciding that Hayden Mullins was more worthy of a role in the Hammers engine room, and after just five appearances he left for Liverpool in January 2007.

During his three seasons at Anfield he formed a formidable midfield alliance with Xabi Alonso and Steven Gerrard, firmly cementing his place as one of Europes top defensive screens. Liverpool fans soon fell in love with the Argentinian for his fearlessness in the tackle – especially against arch rivals Manchester United – and his coolness in possession.

However, his superb displays at the heart of the Reds midfield did not go unnoticed and when Barcelona came knocking in the summer of 2010, Mascherano decided it was too good an opportunity to turn down and up sticks to move to the Nou Camp, where he was converted into a centre-back and won a bucketload of trophies alongside his compatriot Lionel Messi.

Tevez was of course part of the controversial third party ownership ownership deal that saw himself and Mascherano join West Ham in 2006. Although Tevez struggled initially in London he eventually found the type of form that had seen him voted South American Footballer of the year, and almost single handedly saved the Hammers from relegation.

His superb displays were rewarded when he moved to Manchester United on a two year loan deal, and just like at West Ham, he soon became a firm fan favourite due to his pace, skill and unbelievable work rate. Despite winning two Premier League titles and a Champions League during his time at Old Trafford, much to United fans dismay, Sir Alex Ferguson decided against making his move permanent.

Maybe with something of a point to prove Tevez decided his next club would be close by, and decided to move to the newly oil rich Manchester City. Something the Blue half of Manchester were only to happy to rub in their great rivals faces, with City famously posting a massive picture of Tevez with the caption ‘’Welcome to Manchester,’’ on the motorway entering the city.

Tevez continued to terrorise defensives throughout England, but his time at City will probably always be most remembered for when he refusing to come on as a substitute for a Champions League game against Bayern Munich in September 2011. Tevez and City boss Roberto Mancini obviously had a massive falling out over the incident and the Argentina international returned to his homeland, where he was regularly pictured playing golf. However, he would return from exile the following February and play a pivotal role in City winning their first ever Premier League title.

In 2013 Tevez called time on his career in English football and joined Italian giants Juventus, having scored 84 goals and providing 36 assists in 202 EPL appearances. At his very best the little Argentinian was a tour de force capable of pinning back an opposition defence almost single-handedly.

As we said right at the top Manchester City have spent a whole load of money on top-class players since 2008, but the signing of Argentinian striker Sergio Aguero from Atletico Madrid in the summer of 2011 is undoubtedly the most important.

The man they call Kun had been tipped for greatness ever since he burst on the scene as a teenager with Independiente in his homeland, and it did not take long for City fans to realise they had a very special talent on their hands. Aguero made his debut as a second-half substitute in a 4-0 win over Swansea and quickly scored a brace, which included a rasping 30 yard drive.

He went on to score 23 goals in his first season at the Etihad, but it was his last goal of that season that will forever live in English football folklore. City went into the final game of the season, a home fixture against a struggling QPR side, needing to match Manchester United’s result to claim their first Premier League crown.

However as the game entered injury time City were 2-1 behind and all hope seemed to be lost, until Edin Dzeko popped up with a 92nd minute header to level the scores. But it wasn’t enough as Man Utd had already beaten Sunserland up at the Stadium of Light, a result which would have seen them Champions as it stood.

Then with almost the last kick of the game Mario Balotelli poked the ball through to Ageuro who blasted past Paddy Kenny in the QPR goal. Ageuro’s strike sealed the most dramatic Premier League title victory of all time and prompted Sky Sports commentator Martin Tyler to produce his famous ‘’Aguuuerrooooooo,’’ moment, which has become truly iconic.

Since then Aguero has continued to score goals for fun, adding two more Premier League titles to his collection. He is now Man City’s all time leading goal scorer having found the net over 200 times for the Citizens. Overall the Argentinian has banged in 143 EPL goals in 203 appearance, and in all honesty it is scary to think how many he would have scored had it not been for persistent injury issues over the years.

Aguero has proven himself time and time again to be one of the most lethal finishers in World Football, and when he does finally leave the Etihad in the coming years he will leave not just as a Man City legend, but also as one of the greatest players the Premier League has ever seen.