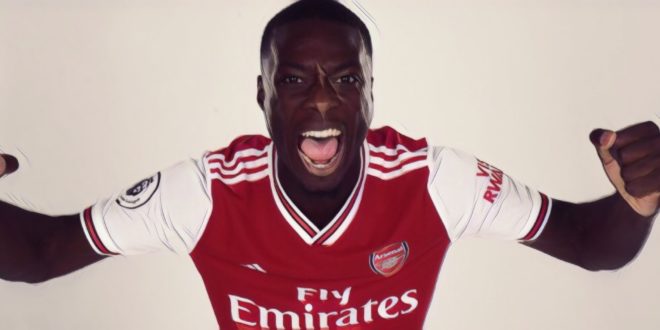 Five most expensive African footballers ever

Harry Diamond 03/08/2019 Five of the Best, Opinion/Features Leave a comment

Nicolas Pepe’s club-record £72m move to Arsenal catapults him into the list of most expensive African footballers of all-time, but where does the new boy at the Emirates rank?

The continent has produced some of the finest players in European football in recent years, demonstrated by a trio of African footballers sharing the Premier League’s Golden Boot award in 2018/19.

The finest African talents continue to make their way to the world’s leading clubs, often for huge sums in the ever-increasing world of football finances.

Here are the five most expensive African footballers of all-time…

Keita developed a reputation as one of the Bundesliga’s best midfielders during a spell at Red Bull Leipzig, his performances attracting the attention of Premier League giants Liverpool.

After a protracted transfer-saga, Liverpool secured a £52m deal to bring Keita to Anfield, with Jurgen Klopp hoping the 24-year-old could bring dynamism to his work-horse midfield.

His debut season at the club was marred by injury problems, as Keita struggled to find consistency as he adapted to the demands of the English game.

The Guinea midfielder offered glimpses into his undoubted talent, though after tasting Champions League success in a bit-part role, he will hope to make a bigger impact at the European champions next season.

The Gabon international enjoyed a prolific spell in German football with Borussia Dortmund, winning the Bundesliga Golden Boot in 2016/17, his performances prompting Arsenal to spend a then club-record £56m to bring the forward to the Emirates in January 2018.

Aubameyang adapted seamlessly to life in English football, scoring 10 goals in 13 appearances in his first six months at the club.

He continued in a similar vein in his first full season, scoring 31 goals in all competitions to win a share of the Premier League’s Golden Boot.

Having struck up a fine understanding with striker partner Alexandre Lacazette, the duo will be key to Arsenal’s hopes of securing Champions League qualification next season.

The star behind Leicester’s shock title triumph in 2016, Mahrez joined Pep Guardiola’s all-conquering Manchester City side in the summer of 2018.

Arriving for a club-record £60m, the fleet-footed Mahrez brought a new dimension to City’s wealth of attacking options. The Algerian scored 12 goals and provided a further 12 assists as City won an unprecedented domestic treble in his first season at the Etihad, though the 28-year-old will hope for increased opportunities having found starts limited.

City will hope to become just the second team in Premier League history to win three consecutive league titles next season, whilst Mahrez will also hope to be a key player as they seek an elusive first Champions League title.

The Chinese Super League continues to invest heavily as they bid to develop the game in the country, with Beijing Guoan making Villareal forward Cedric Bakambu the then most expensive African footballer of all-time in 2018.

The DR Congo striker had enjoyed a prolific spell at the Spanish side, scoring 32 goals in 75 La Liga appearances before his money-spinning move to China.

His career at the club began in impressive fashion, Bakambu scoring 23 goals in 28 appearances for the Beijing side and winning the Chinese FA Cup in his first season.

Pepe had attracted interest from across Europe after a stunning season for the French side, scoring 22 Ligue 1 goals as Lille finished as runners-up to champions Paris Saint-Germain.

A pacey, left-footed winger who plays predominantly from the right, Arsenal will hope Pepe can replicate his form in English football as they bid to re-establish themselves amongst the Premier League’s elite.