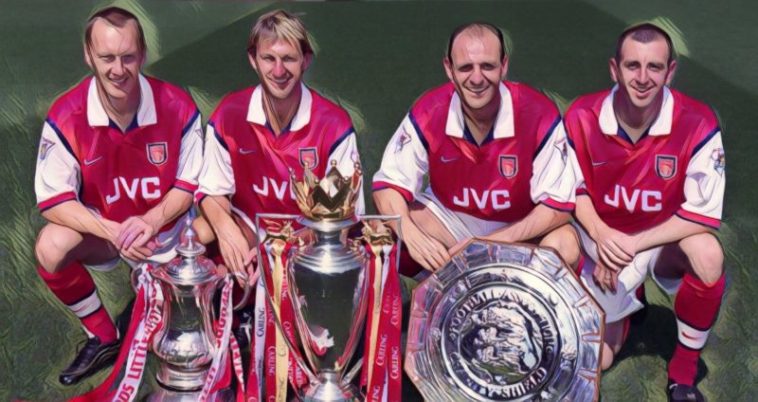 The no-nonsense backlines behind the greatest teams of the past thirty years of European football.

Ah, the back four. Old reliable. Safe as houses. None of this wing-backs nonsense. You’ve got two centre-backs protecting the goal, one for brains the other for braun. And sometimes just braun and no brains. Then your full-backs either side, keeping the opposition wingers quiet, maybe joining the attack when the moment’s right. But when one’s up, the other hangs back.

There’s something incredibly satisfying about a solid back four, especially one that doesn’t need another four people in front of them to keep things tight. Nah, they can take care of themselves against just about anybody. “We got this”, they’ll say, before clearing a ball into Row Z for the fiftieth time that game.

And they know they’re not going to get all the plaudits; whether it be the tricky winger, the fancy dan playmaker or the prolific number nine, they know someone else will grab all the headlines first after the win.

So here’s to you, the back four. We still love you.

The greatest back four defences of the last thirty years of football:

These days Arsenal is all about possession football, getting it on the deck, creating nice angles and passing the other team to death. But before Arsene Wenger came along and installed his “philosophy”, the club were known for quite the opposite.

“One nil to the Arsenal” was a common refrain about the team of the late eighties up until the mid-nineties, meant purely in the pejorative sense. Under George Graham, the Gunners were Chelsea before there was Chelsea. In many ways to the two London clubs swapped places, the Blues going from an entertaining outfit with continental class to a defensively solid and tactically astute side.

Perhaps the most impressive thing about this backline is that they won multiple league titles and cups across two decades playing two entirely different styles. Their peak came in 1999 when they conceded just 17 goals in the league, which is less than half a goal a game, although they agonisingly missed out on the title by a point to Manchester United.

Between 2007 and 2009, Manchester United were the dominant force in English football. They won three consecutive league titles and reached two Champions League finals, winning it in 2008. And they somehow managed all of this with Wes Brown as a regular starter.

John O’Shea was United’s answer to the Swiss Army, standing in wherever he was needed, but lost out to Brown for a place in the starting line-up for the 2008 UCL final. It illustrates how Alex Ferguson was able to get the most out of his fringe players that they conceded just 22 league goals that year, alongside the ridiculous talent he possessed in that backline.

Rio Ferdinand has a strong claim as the best central defender in Premier League history, while the partnership that Nemanja Vidic and he struck up was the stuff of legend. Left-back Patrice Evra, who played in five Champions League finals for three different clubs, completes the incredible quartet.

Arguably the best defence to never win the Champions League, Chelsea boasted the stingiest backline in English football under Jose Mourinho. In his first season in SW6, the Blues set a new Premier League record by conceding just 15 goals. It’s unlikely we will ever see it broken.

Individually each member of this back four was exceptionally talented in their own right, but they were aided by the talent both behind and in front of them. Petr Cech was considered the best goalkeeper in the world at that time, while Claude Makelele had a tactical role named after him, which tells you all you need to know.

The Ajax team of the mid-nineties were more well-known for their attacking threat, scoring a monumental 106 league goals that season, but it was their defence that provided the steel to one of football’s greatest ever teams.

The first thing to note is that Louis van Gaal set his side up in a very unique way, playing them in 3-4-3 formation with a midfield diamond. At the time it was space-age stuff, blowing away the opposition in the Netherlands (they went undefeated in the Eredivisie in 1994-95) and in Europe, where they reached successive Champions League finals.

Although the defence is technically a back three, Frank Rijkaard is also a part of the backline, shielding the centre-backs and sweeping up in front of them.

Ajax conceded 28 goals in 34 league games that season, which is impressive without being elite level defending, but Van Gaal was willing to concede a couple of extra goals here and there so long as the philosophy of the team was right. On top of that their individual talent was exceptional, guiding the Dutch outfit to the pinnacle in 1995.

They also kept a young Ronaldo, who was eating the Eredivisie up for breakfast at PSV Eindhoven, very quiet on the two occasions the teams met that season.

For as long as we live, we might never see a better defence than the one AC Milan boasted from the late eighties to the mid-nineties. Between 1987 and 1994, these four men were the backbone of a side that won four Scudetti and three European Cups.

It was one of the great teams in history bolstered by one of the all-time greatest backlines; Mauro Tassotti, the right-back; Alessandro Costacurta, one of the only players to win five European Cups, at centre-back; Franco Baresi, the titan who has finished third, second and first in each World Cup he’s played in, his partner in the middle; and, of course, the one and only Paolo Maldini at left-back, although he was often played centrally, where he also excelled.

Very possibly the most decorated back four that has ever existed, their peak arguably came in the 1993-94 season, in which they conceded just 15 league goals (they also conceded just 14 in 1987-88) before destroying Barcelona’s Dream Team 4-0 in the Champions League final.

The most impressive thing about this defensive unit wasn’t so much the success itself, but their longevity and the consistency over that period of time. It wasn’t until 1997 that this group was properly broken up, by which point they had reached another Champions League decider in 1995. On top of that, each player had careers lasting either close to or over 20 years.

The four men played together at the World Cup for Italy, where they came agonisingly close to beating Brazil in the final in 1994. Ironically, after putting in the performance of his career, Baresi missed one of the penalties.

Our look at the best back fours ever is brought to you in association with our friends at Carling, who’ve just launched a superb new inter lockable glass that allows you to carry four pints easily. Just like a great back four, Carling’s new glass sticks together!