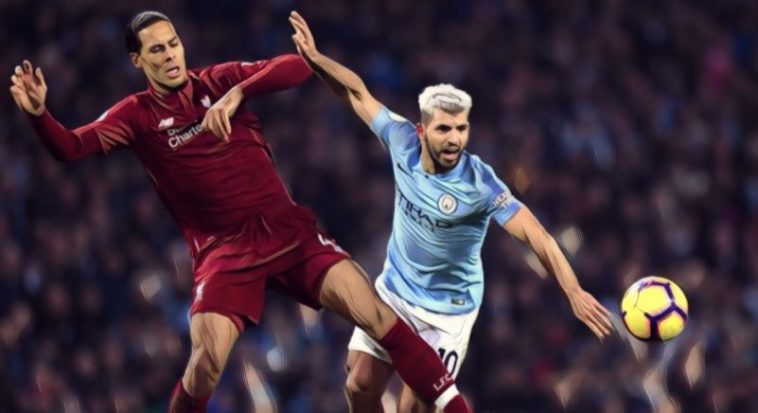 Last season’s top two prepare to do battle once more in Sunday’s Community Shield, in the latest installment of a seemingly growing rivalry.

Guardiola’s City proved themselves as England’s finest by winning the country’s first-ever domestic treble, though Liverpool’s disappointment was short-lived as they were crowned champions of Europe for a sixth time by lifting the Champions League in June.

Unquestionably two of Europe’s best sides, but which stars would make a team compiled of the best players from each squad?

Ahead of this weekend’s clash at Wembley, we’ve decided to pick our combined Manchester City and Liverpool XI…

Arguably the most fiercely contested position on our team sheet, we’ve decided that Ederson narrowly pips his international teammate Alisson in goal.

Whilst Alisson shone during his first season at Anfield, winning the Premier League’s Golden Glove, it is difficult to overlook Ederson’s impact at the Etihad since his arrival in 2017.

The Brazilian has helped change the way modern goalkeepers are viewed, combining a commanding presence with the passing range of an elite midfielder.

Often referred to as a sweeper-keeper, Ederson has also been credited with being the deepest of deep-lying playmakers, able to launch attacks with his pinpoint long-range passing.

The 25-year-old is perfectly suited to Guardiola’s style, his performances rewarded with an inclusion in last season’s PFA Team of the Year.

Edging out England international teammate Kyle Walker is Liverpool youngster Alexander-Arnold, whose rapid development has seen him emerge as one of the Premier League‘s most potent attacking full-backs.

As well as being part of a Liverpool defence which possessed the Premier League’s best defensive record last season, the 20-year-old smashed the league’s record for assists by a defender by creating 12 goals last season.

An impressive passing range and a fine set-piece taker, the highly-rated academy graduate looks set to be a fixture in the Liverpool side for seasons to come.

The Dutch defender arrived at Anfield for a world-record fee in 2018, immediately helping to shore up a Liverpool defence which had previously hampered the club’s progress.

Whilst the club fell just short in their pursuit of an elusive Premier League title, Van Dijk was named Man of the Match as Liverpool lifted the Champions League with victory over Tottenham in Madrid.

Named as the PFA Player of the Year and a favourite with the bookmakers for the Ballon d’Or following a standout campaign, Van Dijk is now widely regarded as the best centre-back in world football.

The French defender had been regarded as a promising talent during his time in Spanish football, and slotted seamlessly into the City squad.

A fine defender and comfortable in bringing the ball out of defence, Laporte’s ability as a ball-playing defender make him ideally suited to Guardiola’s possession-based style.

The 25-year-old has since established himself as the club’s first-choice defender, whilst he has also shown versatility in filling in at left-back on occasion.

Having helped City to back-to-back titles and a domestic treble, his continued omission from the France squad remains surprising.

An unheralded signing upon his arrival from Hull City in 2017, Andy Robertson has since proven to be one of the best Premier League bargains of recent seasons.

Robertson was initially behind Alberto Moreno in the pecking order at Anfield (yes, really), before seizing his opportunity and establishing himself as first-choice.

The Scottish international’s relentless work-rate has made him a huge fan favourite amongst Liverpool supporters, offering energy and thrust down the club’s left-hand side.

The Brazilian international has been fundamental to City’s recent successes, providing the defensive screen which has allowed the club’s attacking players to flourish.

At 34, he continues to bring energy, composure and tactical intelligence to the holding midfield role, his importance often emphasised most when he is absent from the side.

His advancing years mean City will have to plan for his eventual departure, as evidenced by the club-record signing of Rodri this summer, though the midfielder is likely to continue to play a key role in the coming campaign.

For all of City’s expensively assembled additions in recent years, few have been as important as the former Shakhtar Donetsk star.

Signed as the long-term replacement for namesake David, the Portuguese schemer pips the Spaniard to a place in our team.

Establishing himself as firm favourite amongst the club’s fans, Bernardo is a creative presence who runs himself into the ground, his performances last season rewarded with City’s Player of the Year award.

It is perhaps frightening for the rest of the Premier League that City’s domestic treble success was achieved without the ability to regularly call upon their Belgian midfielder.

Injuries hampered the 28-year-old last season, though when fit he regularly showed why he is regarded as one of Europe’s elite midfield talents.

Few in the Premier League possess the vision or passing range of the former Wolfsburg player, who is often the heartbeat of City’s best displays.

Comfortable in a variety of roles, De Bruyne is as complete a player as there is in English football’s top flight, and arguably its very best.

Many questioned Liverpool’s decision to spend £36m in bringing Salah back to the Premier League in 2017, the Egyptian having endured an underwhelming two-year spell with Chelsea.

His doubters were soon silenced, a goal on his debut at Watford was following by 31 more league strikes, smashing the record for goals in a 38-game league season.

His performances saw him win a PFA Player of the Year and FWA Footballer of the Year double, and his prolific return in front of goal continued last season.

Having suffered heartbreak when he was forced off injured in the 2018 Champions League final, Salah opened the scoring from the penalty spot in this season’s showpiece, as Liverpool redeemed themselves by becoming champions of Europe for a sixth time last season.

Edging out Sadio Mane into our team is England winger Raheem Sterling, who seems to be on a continued upward curve of improvement under Pep Guardiola.

Tipped for the very top from a young age, the 24-year-old is flourishing under the Spaniard’s tutelage, with 2018/19 his most productive season yet.

The former Liverpool star hit 22 goals in all competitions last season, providing a further 10 assists, and was often looked to for inspiration during City’s treble-winning campaign.

His performances were rewarded with a FWA Footballer of the Year and PFA Young Player of the Year double, deserved individual accolades for the winger’s most impressive season to date.

In the battle of South American strikers, City’s Sergio Aguero leads our line ahead of Liverpool’s Roberto Firmino.

The Argentine forward has been one of the Premier League’s most ruthless finishers since his arrival in 2011, and continues to score prolifically for Pep Guardiola’s side.

Alongside Harry Kane, Aguero possesses the best goals-to-game ratio of any Premier League player to have scored over 100 league goals.

His tally of 21 league strikes last season saw him move up to sixth in the division’s all-time record goal scorers list, a similar total in 2019/20 will see him move ahead of the likes of Henry and Frank Lampard.

Our Liverpool and Man City combined XI brought to you in association with our friends at Carling, who’ve just launched a superb new inter lockable glass that allows you to carry four pints easily. Now if that’s not an innovation we can all get behind, we don’t know what is!