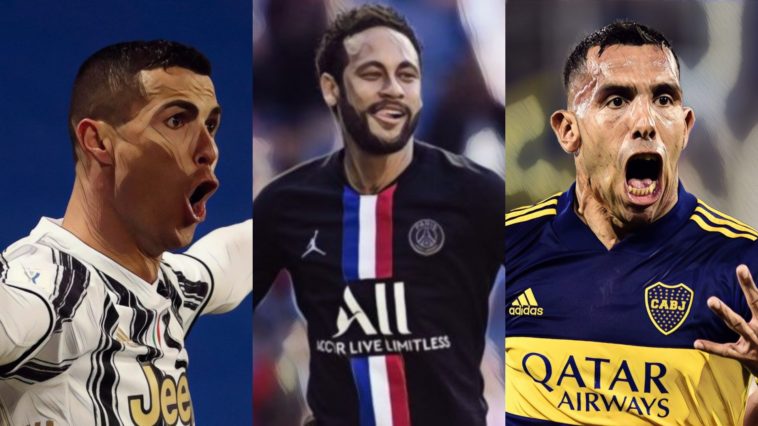 February 5 may just seem any other ordinary date on the calendar for many, but today just happens to have produced some of the most iconic footballers of the modern era.

Some stellar names celebrate their birthdays on the fifth of February and to mark the star-studded occasion we’ve decided to look at and appreciate some of the game’s greats celebrating today.

Headlining the superstar set of footballers born on February 5 is Cristiano Ronaldo, who celebrates his 36th birthday today and remains one of the game’s greatest talents.

Ronaldo’s career has proven one of extraordinary and almost unparalleled success, announcing himself with a performance against Manchester United as a teenager that persuaded the Red Devils to sign the precociously talented winger.

The Portugal international spent six seasons in the Premier League, transforming from exciting prospect to one of the world’s best, with his showmanship style replaced by a ruthless efficiency that helped inspire Sir Alex Ferguson’s side to success.

Ronaldo was one of the driving forces behind three consecutive league titles for the Red Devils, winning the PFA Player of the Year and FWA Footballer of the Year in 2006/07 and 2007/08. 2008 was particularly glorious, as he also took home the Ballon d’Or after winning a Champions League and Premier League double.

Real Madrid ultimately came calling and signed the forward in an £80m world-record deal in 2009, a fee that proved a bargain as Ronaldo shattered all forms of goalscoring records in the Spanish capital.

Ronaldo hit an astonishing 450 goals in just 438 appearances for Los Blancos to become the club’s all-time record goalscorer, in addition to becoming the highest-scoring player in Champions League history.

His goals helped Real to be crowned as champions of Europe four times, whilst he twice won the Spanish league title before making a move to Juventus in 2018.

Ronaldo has scored 87 goals in 112 appearances for the Italian champions and recently became the greatest goalscorer in football history, his sights firmly set on winning a record sixth Champions League title with the Turin side this season.

His list of records and milestones is as extensive as it is unbelievable, the five-time Ballon d’Or winner amongst the finest footballers to have played the game.

Neymar has long been tipped as the heir to Cristiano Ronaldo and Lionel Messi as the world’s finest footballer, the Brazilian dazzling spectators throughout a career of huge success.

Europe’s leading clubs scrambled to secure the signing of the forward from Santos following his exploits in South America, scoring 126 goals and winning three league titles and the Copa Libertadores before heading abroad aged just 21.

Barcelona won the race for the star and he formed a devastating forward line alongside Messi and Luis Suarez, scoring an incredible 122 goals in all competitions between them as the Spanish giants won a continental treble under Luis Enrique.

The numbers are astounding but they tell only half the story of a fluid front line that tormented opposition defences, each possessing their own unique strengths and ability to conjure up moments of magic.

Neymar racked up over a century of goals and won six major trophies before becoming the most expensive player in football history, signing for Paris Saint-Germain in a £198m deal with his arrival designed to spearhead the French side to European glory.

The 29-year-old is a player who divides opinion and his style ruffles more than a few feathers, but he is captivating to watch in full flight and possesses a natural talent most can only dream off.

Neymar has scored 53 goals in just 62 league games for PSG and his record at international level is similarly outstanding, only Pele having scored more than his 64 goals for record five-time world champions Brazil.

He may have spent much of his career attempting to escape the shadow of Messi and Ronaldo, but Neymar is magical in his own right and a superstar whose best performances may still be yet to come.

90’s Gold: Why we still love the Coventry City of Dublin, Gary Mac and Huckerby

The traditional playmaker has become an oddity in modern football, but those who once lit up the game unshackled by responsibility with their free-spirited style retain a special place in the affections of football fans.

Gheorghe Hagi was arguably one of the last great playmakers having been the star-turn during a glittering period for Romanian football, signing for a formidable Steaua Bucharest side before weaving his magic during spells at both Real Madrid and Barcelona.

Hagi joined a Steaua side that had been crowned as European champions in 1986 and won three consecutive league titles in addition to reaching a second European Cup final, their domestic form so dominant they compiled an unbeaten league run of 104 games.

He scored 76 goals across just 97 league appearances before moving to Real Madrid, though the move failed to truly work out despite some magical moments across two seasons at the Bernabeu.

After a shock move to Serie B side Brescia was followed by promotion and relegation, the performances of ‘The Maradona of the Carpathians’ at the 1994 World Cup saw him shine once more. Scoring in victories over Colombia and Argentina, Romania reached the last eight thanks to the inspiration of their mercurial genius.

That magical left foot of his persuaded Barcelona to hand him a second opportunity in Spain, but his individualistic style was at odds with the demands of Johan Cruyff and he moved on to finish his career with a superb spell at Galatasaray.

He won four league titles and the UEFA Cup with the Turkish side, scoring 73 goals in 192 appearances and lighting up Istanbul with his penchant of making the impossible look ridiculously easy.

Carlos Tevez joins this stellar cast of footballers celebrating today with the forward having enjoyed a storied career at the highest level, winning major honours in Argentina, Brazil, England and Italy.

Tevez began his career with Boca Juniors, the club with whom he holds the greatest affection and one where he has become a legendary figure over three separate spells with the Argentine giants.

There has also been success across both sides of the Manchester divide as well as in Turin, whilst there is a special place in West Ham folklore for the tigerish forward following his goalscoring exploits over just one season in the east end of London.

He burst onto the scene as a teenager as he helped Boca become champions of South America, later starring in an equally impressive spell at Brazilian powerhouses Corinthians, scoring 46 goals in 76 appearances before one of the most stunning transfers in Premier League history.

The much sought-after star was paraded alongside compatriot Javier Mascherano by Alan Pardew as West Ham somehow beat Europe’s giants to the signing of the highly-rated Argentinian duo.

The move was shrouded in controversy over third-party ownership laws and was the sub-plot behind one of the most fascinating relegation battles of all time, Tevez scoring seven goals across the final 10 games of the season to ensure the Hammers’ top-flight status.

He moved on to Manchester United and formed part of a hallowed attacking triumvirate alongside Cristiano Ronaldo and Wayne Rooney, winning two league titles and the Champions League before another controversial move to join billionaire-backed rivals Manchester City.

Tevez became an important figure in the club’s rise and inspired the blue half of the city to long-awaited silverware success, either side of a self-imposed six-month hiatus following a fallout with manager Roberto Mancini.

Controversy continued to follow Tevez but the incidents that plagued his career should not detract from a brilliant footballer, one who terrorised defences with an insatiable desire to chase lost causes and score goals.

He scored prolifically at Juventus before becoming one of world football’s highest-paid players in China via a return to Boca, later heading back to Argentina for one final swansong where he lifted the league title once again last season.

Tevez may have come with baggage for much of his career, but his selfless style means his on-pitch performances will always be fondly remembered.

Read: Five of the best players to play for West Ham and Man United in the Premier League