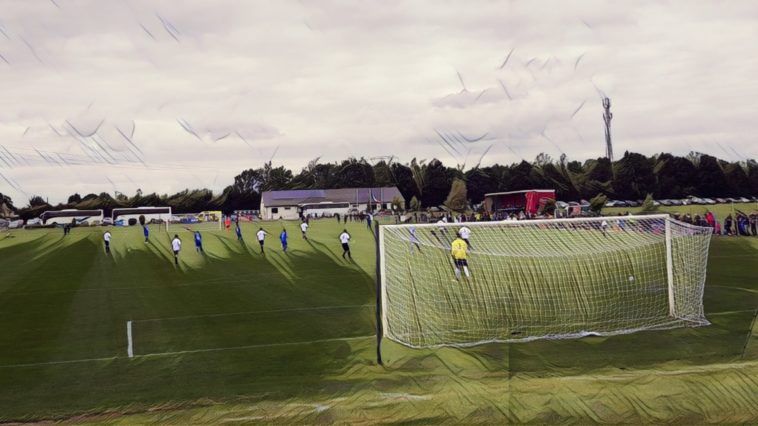 League of Ireland football descended upon so-called small towns in Ireland this past weekend thanks to the FAI Cup, bringing a sense of occasion to local areas in the first round of the competition.

It’s not everyday that League of Ireland football comes to your town, especially when that town has no League of Ireland club of its own to speak of. So your intrepid reporter made the short journey from his current residence to Rathcoffey Road, where Maynooth University Town were hosting Premier Division side Waterford FC.

Judging by the build-up to the FAI Cup first-round tie in the area and the commotion at the venue on the day, you’d swear this was the biggest thing to happen to Maynooth since the Pope said mass here in 1979. It feels like a fitting comparison, as this felt so small-town Ireland.

The club rolled out the local brass band for pre-match entertainment, there was the customary yet tiny tuck shop that you had to queue for 15 minutes just to get a cup of tea, a ditch behind one of the goals where wayward shots would inevitably end up, a rented truck that contained the ‘media centre’ for reporters, and an announcer who informed spectators of substitutions at a glacial pace.

As for the football itself, it was a fairly predictable affair in which the visitors dominated proceedings while the weaker side were hemmed in their own half, but couldn’t find a way to goal thanks to the shot-stopping heroics of Demer Sterio. Relatively short for a goalkeeper, Sterio had quick reactions, commanded his area and pulled off some top-class saves to keep Maynooth in the game. With Mark Travers making his Premier League bow for Bournemouth back in May, perhaps this place just has a knack of producing quality goalies.

Waterford’s insistence on taking potshots helped to keep it scoreless, and it was only when they worked the ball well into the box that they broke the deadlock. Shane Duggan had a simple tap-in inside the five-yard box after an incisive through ball gave him one of the easiest finishes of the weekend. A Kenny Browne goal from a set-piece in the second-half put the game, and an unlikely upset, beyond all doubt.

One player who caught the eye on Sunday was Walter Figueira, who bore a striking resemblance to Chelsea’s Willian in more ways than one. Aside from sharing virtually the same hairstyle, Walter is also a wide player of small stature who likes to cut in from the wing before dispatching a shot on goal. Maynooth denied him the space in behind to operate the way he wanted, although he did get a few dangerous shots off.

While the whole thing felt like it could have been the backdrop to an episode of Father Ted, it was genuinely great to see a local community make such an event out of the match, and a successful one at that. It was great to see so many Waterford supporters make the trip up to Kildare, and I would hazard a guess that there were more people in blue than in the home team’s colours in attendance.

Wouldn’t it be great if we could have more days like this for Irish football in local towns all over the country?

More talking points from the FAI Cup first round:

Bohemians complete one of the all-time great cup comebacks

They — whoever they are — say 2-0 is the most dangerous scoreline in football. But two goals up with five minutes left in a game? Surely there are few safer scorelines in sport.

Not so for Shelbourne this past weekend, who were on the receiving end of an incredible comeback that sees local rivals Bohemians advance to the second round at their expense.

Keith Long’s side battled back from 2-0 down in the 85th minute to win 3-2 with goals from Keith Buckley and Danny Mandroiu (2).#SheWore ??

Some outstanding goals from captain Keith Buckley, who spoke to The Football Faithful just days before the match about growing up as a Shels fan, and Daniel Mandroiu saw a rare and sweet victory at Dalymount slip out of the visitors’ hands. Extra time beckoned, but with just seconds remaining, Mandroiu did what Mandroiu does, and smashed the ball into the top corner of the net.

Game. Set. Match. With European qualification a genuine possibility and still remaining in three cup competitions, this is turning out to be a very special season for the Gypsies.

Cabo prove they’ve got the stones to step up

There were some scares at the weekend, but no cup upsets as virtually all of the favourites progressed to the next round. Cork City were given the biggest scare of all as they were taken to penalties by Cabinteely at Stradbrook.

The Munster outfit prevailed, in the end, thanks to goalkeeper Mark McNulty, but the home side were agonisingly close to securing the shock of the weekend. After the game finished 1-1 in regulation, Rob Manley put Cabo a goal up just four minutes into extra-time and it looked like they would hold on for arguably the biggest win in the club’s short history.

Ronan Hurley put an abrupt end to that notion in the 119th minute of play by scoring an equaliser, and it was Manley’s miss that was decisive in the shootout, with McNulty saving not only his side’s blushes, but the fans from a wasted trip up to Dublin. They had something to celebrate on the long drive home.

While it was no doubt a disappointment to lose, Cabinteely can take a lot of solace from their performance. The club only entered the league in 2015 and struggled for a few years to gain much traction on the field, with many commentators openly questioning “what’s the point of them?”

Slowly but surely they’ve built a competitive team based on promising youngsters lead by grizzled veterans Pat Devlin and Eddie Gormley, as well as a bunch of committed volunteers. They currently occupy one of the promotion playoff spots and a place in next year’s Premier Division is not out of the question. This performance against Cork indicates they might just have the pedigree to compete at the top level.

Sligo Rovers absolutely demolished poor Glebe North in Balbriggan, putting eight past the hosts in a total mismatch of a contest. The match bore witness to the unusual sight of two hat-tricks in the one game, as Kris Twardek and David Cawley each found the net three times.

The hat-trick from @DavidCawley22 last night as Rovers made it through to the next round of the FAI Cup #bitored pic.twitter.com/O15hOy89Q5

I wonder who got to keep the ball at the end of the game?

A hat-trick for @twardek was another highlight of the night pic.twitter.com/GBO8lukwl8

Although there isn’t much to be gleaned from this match in terms of Sligo’s performance, this is as good a time as any to point out that Rovers are having a solid campaign in the SSE Airtricity League. After struggling to stay in the top flight these past few years, this season was all about consolidating their position.

The Bit O’ Red are firmly mid-table right now, a fair distance away from the European spots, but are five points ahead of both Waterford and Cork, and more importantly, well away from the drop zone.

Read: The inner city baller with a grá for Bohemians and a multicultural Ireland

See Also: Who is the greatest League of Ireland export to the Premier League?