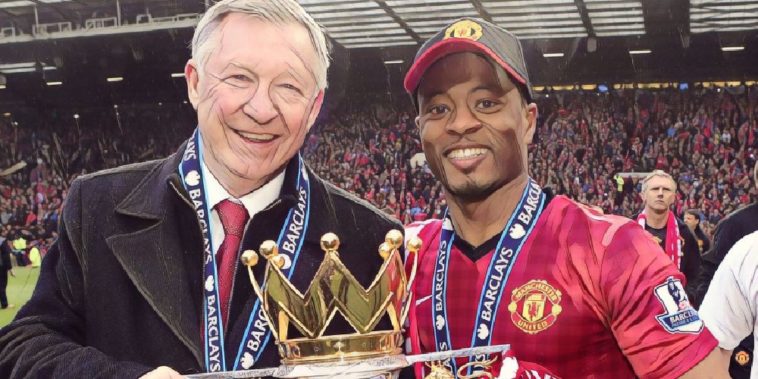 Patrice Evra has opened up on the winning mentality of Sir Alex Ferguson and says the former Manchester United manager taught his players to ‘be like a robot’.

Evra established himself as one of the finest full-backs in Premier League history during a glittering eight-and-a-half-year career at Old Trafford, winning five league titles and the Champions League amongst an extensive collection of major honours.

The Frenchman has now spoken of the winning mentality instilled in the Manchester United players by legendary manager Ferguson, revealing how he became ‘like a robot’ as winning games and lifting silverware became the norm.

“I’ll be honest, when you start winning the third one, the fourth and the fifth, you celebrate but not the same way,” Evra told The Official Manchester United Podcast.

“You celebrate because of the cameras and stuff, but it’s not the same. Ferguson taught us all to be like a robot. I don’t think I was a human being playing for Manchester United. When we won games, when I was doing something good, I wasn’t pleased. For me, it was something normal.

“I always say that Deschamps taught me winning is important, but Ferguson taught me that winning is normal. I remember after big wins against Liverpool he just said, ‘Well done, son’. He was never screaming, apart from when we won the Champions League final. It was just something normal, winning the league.”

Evra became a firm fans favourite during his time in English football and has opened up on life as a Manchester United player, revealing the importance Ferguson placed on respecting the club’s long-standing traditions and illustrious history.

The 38-year-old has recalled an incident in which Ferguson reminded the players of their responsibilities and delivered his notorious ‘hairdryer’ treatment, blasting the squad for blanking fans seeking signatures during a pre-season tour.

“So every time I was putting this shirt on, and I know how many people have worn this shirt and won,” Evra said. “Respect this tradition, the philosophy. I was like, ‘I can’t let down those people’. When you play for Manchester United, it’s not for you.

“You don’t use Manchester United, and because you’re a United player so you’re famous, you’re on social media. You play for United because you have to give to those people.

“I give you one example: once when we were in pre-season, and before we came on the bus, we were really tired, I’ll be honest with you, and there was a queue of fans. And the players were like: when no one signs, no one has to sign.

“So we went straight to the bus, everyone, and I look out the window and I see Sir Alex Ferguson signing each autograph. I swear he must have signed for like 45 minutes. He was signing [for] everyone.

“I say, ‘Guys, when the boss comes on the bus, we are done.’ And he came on the bus, he gave us the hairdryer. ‘What the hell do you think you are?! Those people are paying your salary. Those people are coming to watch you. Now get the f**k down there and sign.’ And we had to sign each fan. But that’s the mentality.”