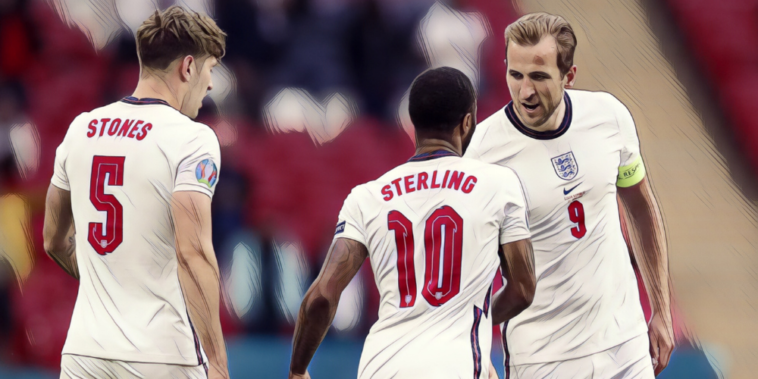 England meet Germany in the last 16 of Euro 2020 on Tuesday, as one of football’s great rivalries is resumed at Wembley.

Neither side has truly convinced in their opening fixtures of the tournament so far, but victory for either team would represent a huge opportunity to reach the final given the draw for the knockout stages.

Ahead of the eighth major tournament meeting between the two teams, we’ve picked our England v Germany combined XI:

Absolutely no contest, this one.

Jordan Pickford has rarely let England down and his form for his country has invariably been more consistent than his showings at club level, but Manuel Neuer remains arguably the best in the business even into the latter stages of a phenomenal career.

Germany’s captain will lead his side out at Wembley and provides an authoritative last line of defence as the 35-year-old bids to add the European Championship to a silverware collection already containing nine Bundesliga titles, the World Cup and two Champions League trophies.

The best goalkeeper of his generation and one of the best to have ever adorned the gloves.

Utilised in a wing-back position at Euro 2020 to date, Kimmich continues to excel in whichever role his managers for both club and country see fit.

The 26-year-old is a crucial component of this Germany side with much of their best work in the tournament coming through the Bayern Munich star, whose creativity, intelligence and unrelenting will-to-win act as a driving force of Joachim Low’s side.

Kyle Walker is unfortunate to miss out on selection, but Kimmich is amongst the finest in his position in world football, whether that be at full-back or in central midfield.

After two nailed-on starters to begin our combined XI, selecting the central defenders in this side represents an altogether more difficult challenge.

England’s perceived greatest weakness pre-tournament was the heart of the Three Lions’ defence, but Gareth Southgate’s pragmatism has ensured progress without a single goal conceded in three group fixtures – the first time that has happened in a major tournament since 1966.

John Stones has been central to that statistic and earns inclusion here, edging out Mats Hummels who – for all his attributes – has seen his lack of pace and mobility exposed in an unconvincing German defence.

Stones may not be to everyone’s taste, but there’s a reason the 26-year-old starts regularly for arguably the best club side in Europe at present.

Just a few weeks ago and you would have been laughed at for comprising an all-England centre-back pairing in this combined XI, but England’s solidity (albeit against limited opposition) and Germany’s visible weaknesses (against far superior opposition) leave us with Harry Maguire joining Stones in our combined side.

Much like his England teammate, Maguire often receives his fair share of flack, but perhaps the greatest indication of the Manchester United defender’s importance is the impact when he is absent for both club and country.

Robin Gosens has taken an alternative route to the top but is relishing his opportunity to thrive at a major tournament, the Atalanta star’s all-action performances at wing-back having been a highlight of Germany’s mixed campaign to date.

The 26-year-old was sensational in the crucial 4-2 win over Portugal in the group stages, scoring once and providing a further two goals in a brilliant individual showing.

Gosens’ relentless running down the left-hand side will be a major threat to England on Tuesday, with the German having already spoken on his determination to silence a raucous home crowd at Wembley.

Once an unassuming component of the Manchester City midfield, Ilkay Gundogan took on enhanced status during the 2020/21 campaign to score 17 goals in all competitions for the Premier League champions.

Energetic, intelligent and capable of ghosting forward to score goals, Gundogan is capable of fulfilling a number of roles at the heart of the side and is a mainstay of this German team.

Set to face off against club teammates in Walker, Stones, Raheem Sterling and Phil Foden this week, Gundogan will be tasked with gaining the control in midfield needed to decide huge fixtures in the knockout rounds of a major tournament.

Effortlessly elegant and still so, so good.

Toni Kroos is the metronomic figure at the heart of the Germany team and the ball will move through the Real Madrid midfielder on Tuesday evening, with no player having made more passes during the group stages of Euro 2020.

England’s downfall at international level has often been keeping possession against the elite sides and there are few in world football better at ball monopoly than Kroos, who, like Neuer, will hope to complete an incredible silverware collection with European Championship success this summer.

England’s youthful side have several players seemingly set for huge futures and whilst the likes of Mason Mount, Phil Foden and Jack Grealish are all worthy contenders for selection, we’ve opted for tried and tested as the attacking link in our 4-2-3-1 system.

Muller has returned to the Germany side after having his international career prematurely curtailed by Joachim Low following a disappointing 2018 World Cup, his club performances having been too difficult to ignore with Low realising his mistake.

The 31-year-old has finished as the Bundesliga’s leading assist provider in each of the past two campaigns, whilst 29 goals in all competitions across that same period highlights the goal threat he provides.

Serge Gnabry has thrived following a difficult spell in England to become a leading light of both the Bundesliga and German national side, the multi-functional forward a key component of the Bayern Munich attack.

Gnabry has scored 47 goals across three seasons in Bavaria, including 23 goals in all competitions as Bayern won the treble in 2019/20. His record at international level meanwhile is equally outstanding, scoring 16 goals in just 25 caps for Die Mannschaft.

Comfortable on either flank or as a central striker, tracking his movement will be crucial to England’s chances of reaching the quarter-finals with the sharp-shooting former Arsenal star once again ready to show English fans how far he’s come.

Jack Grealish is everyone’s flavour of the month right now and perhaps rightly so, there’s something ever so captivating about the confidence and fearlessness the Aston Villa captain brings to the England side.

Grealish is an outstanding footballer and one whose level may just rise further around better players, but it is Raheem Sterling who has shown his value to the Three Lions’ side at Euro 2020 to date.

Written off following a testing period at Manchester City last term, the fickle nature of football fans meant it was quickly forgotten how influential the winger had been for club and country in recent years.

Sterling scored 79 goals across the three seasons prior to 2020/21, whilst he now has an impressive 20 goal involvements in his past 19 appearances for England.

Raheem Sterling has 20 goal involvements in his last 19 games for England 🏴󠁧󠁢󠁥󠁮󠁧󠁿 pic.twitter.com/2lsdaNBMnT

The 26-year-old is the only Three Lions player to score at Euro 2020 to date with winners against Croatia and the Czech Republic and will be amongst England’s chief goal threats once again against Germany.

It’s fair to say it’s not been Harry Kane’s tournament at Euro 2020 to date.

Three sluggish and goalless performances in the group stages so far have raised concerns over the England captain’s condition, but Kane remains his nation’s most important player and the man who can make the difference in the knockout stages.

Three Premier League Golden Boots, one World Cup Golden Boot and 34 goals in 57 caps for England, Kane’s credentials make this an easy selection in our combined side with the 27-year-old one of the best number nines in the game.

Tuesday’s clash would be the perfect time to rediscover his goalscoring mojo.