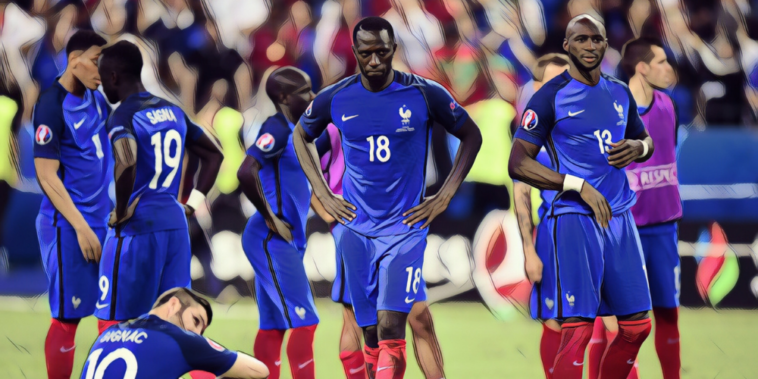 Euro 2020 has taken on a unique format with multiple host nations this summer, the likes of England, Holland and Spain amongst nine nations with ‘home’ fixtures during the group stages.

The change has removed a sole host from the European Championship, leaving the tournament without just one side buoyed by a feverish crowd and optimistic expectations.

Expectations often come with pressure however, and throughout the tournament’s history we’ve seen several host nations come agonisingly close before failing to win the trophy.

Here are five European Championship host nations who froze at the final hurdle.

The final European Championship before West Germany reunited with East Germany saw the former host Euro 88, with Franz Beckenbauer’s side starting as one of the pre-tournament favourites to win the trophy on home soil.

After being held to a draw by Italy in their opening fixture, the Germans progressed in comfortable fashion after beating both Denmark and Spain, each win ending in a 2-0 scoreline.

The last four pitted West Germany against old rivals the Netherlands, a talented Oranje side having bounced back from an opening defeat to the Soviet Union to reach the semi-finals as group runners-up.

West Germany had thwarted the Dutch in the 1974 World Cup final, but there was no repeat despite Lothar Matthaus handing the host nation the lead from the penalty spot shortly before the hour.

Beckenbauer’s side were just 16 minutes away from the final, though Ronald Koeman’s penalty sparked a turnaround from the Oranje who scored a late winner through Marco van Basten.

The Netherlands progress to the final and beat the Soviet Union 2-0 to win their first major trophy, whilst West Germany responded in fine style, winning the World Cup two years later in Italy.

Euro ’96 saw England roared on by a partisan home crowd, with a talented side side initially thriving under the weight of expectations.

Alan Shearer and Paul Gascoigne were the stars of a side that progressed from the group stages in comfortable fashion, the latter scoring a spectacular goal against Scotland during a memorable 2-0 win at Wembley.

Terry Venables’ side dismantled pre-tournament favourites the Netherlands 4-1 in their final group fixture, and after defeating Spain on penalties optimism began to grow around the Three Lions’ chances.

It was a familiar foe in the semi-finals as England met Germany, having lost on penalties to West Germany in the World Cup’s last four six years earlier.

Alan Shearer’s third-minute goal got England off to the perfect start at a feverish Wembley, but Stefan Kuntz equalised just minutes later with a tense semi-final unable to be separated across 120 minutes of action – Gascoigne coming agonisingly close to turning home from close range.

Penalties decided the tie and it was the Germans who predictably came out on top, Gareth Southgate the unfortunate party to fluff his lines with the defender’s tame effort saved by Andreas Köpke.

Euro 2000 was the first time the finals were co-hosted, with the Netherlands and Belgium jointly hosting a memorable tournament.

The Netherlands boasted a squad packed full of talent and began the tournament amongst the contenders, an assessment that seemed merited as they blitzed through the group stages with three successive wins.

Those wins included a 3-2 victory over a rotated France side, who had arrived into the tournament as world champions following victory on home soil two years earlier.

Frank Rijkaard’s side then thrashed Yugoslavia 6-1 in an exhilarating quarter-final performance, Patrick Kluivert scoring a hat-trick on his way to winning the tournament’s Golden Boot.

The Oranje saw their run ended following a frustrating last four encounter with Italy however, with Francesco Toldo producing a goalkeeping masterclass for the 10-man Azzurri, who had Gianluca Zambrotta sent off in the first half.

The Netherlands twice spurned penalties in normal time, Frank de Boer seeing his effort save by Toldo, before Kluivert struck the post with a second Dutch spot-kick.

In a feverish Amsterdam atmosphere the host nation’s luck was out, missing three further penalties in the resulting shoot-out as De Boer, Jaap Stam and Paul Bosvelt all missed to see the heavily-fancied Dutch crash out.

Four years after the Dutch disappointment, another host nation entered a home tournament amongst the favourites to win the trophy.

Portugal boasted one of the most star-studded squads in the competition, with ‘Golden Generation’ names such as Luis Figo and Rui Costa blended with Porto’s Champions League winning squad and a teenage Cristiano Ronaldo.

Their tournament got off to a poor start after losing in shock fashion to unfancied Greece in the opener, though Luiz Felipe Scolari’s side bounced back to beat Russia and Spain to progress.

England were beaten on penalties in the quarter-finals after a 2-2 draw, before a 2-1 win over the Netherlands put the Portuguese within touching distance of a first ever major trophy.

In their path was group opponents Greece, who had upset the odds to progress to the final, beating both France and a free-scoring Czech Republic in the knockout stages.

Even given the earlier result and Greece’s progress, it represented a seismic shock when the underdogs were crowned champions of Europe, Angelos Charisteas powering home a header to secure a 1-0 win in Lisbon.

Greece had entered Euro 2004 as 80/1 outsiders for the trophy before emerging triumphant, extending Portugal’s wait for major silverware in the process.

Over a decade after their upset at the hands of Greece, Portugal pulled of a surprise of their own as defensively drilled outfit beat host nation France at Euro 2016.

France arrived with expectations and had twice won the previous home major tournaments in 1984 and 1998, with Les Bleus’ supporters hoping history was about to repeat itself as Didier Deschamps side reached the final.

A nation expected as Deschamps side faced off against Portugal in the final, with the Portuguese having largely stumbled their way through the tournament, only escaping the group stage due to the expanded format after three consecutive draws.

Portugal had beaten Croatia in extra-time, Poland on penalties and underdogs Wales in the knockout rounds, but the task of France was a significant step up calibre of opposition.

Their prospects looked even worse when Cristiano Ronaldo hobbled off with a knee injury, though a Portugal side without their talisman rallied with a stoic defensive display, before snatching an extra-time winner through substitute Eder.

France – firm favourites on home soil – tried to find a breakthrough throughout the 120 minutes with little success, Andre-Pierre Gignac’s effort off the post the closest Les Bleus came as the trophy slipped from their grasp.